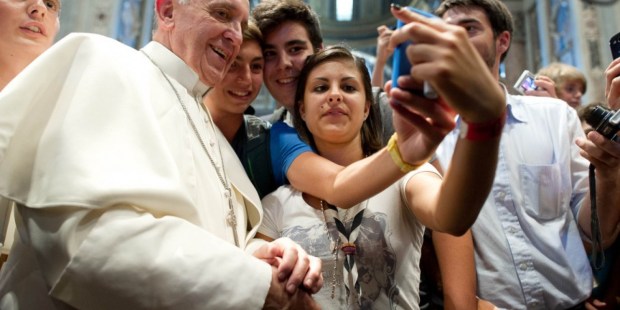 Aleteia has a fielded a team of young journalists to cover Pope Francis’ visit to the United Sates in a social media campaign dubbed #GoodIsWinning.

The Digital Street Team won’t simply be covering the Pope’s comings and goings as he meets with dignitaries and the faithful in Washington, Philadelphia and New York, from September 22 to 27. They will be using social media to share what inspires them about Pope Francis during his visit.

To love intentionally is to love deliberately. It is a choice to be selfless. || #NewPost #GoodIsWinning http://t.co/EnmKLP6kJt

Team members were selected through a competition held this summer in which contestants were asked to use social media to “capture intentional acts of goodness” they see around them. Submissions included posts featuring volunteer work in Haiti, American students raising money for schools in the Dominican Republic, a photo of a sunrise, and a story about someone helping someone move into a new apartment.

According to Jason Deal, senior vice president of strategy and marketing for Aleteia, Pope Francis has inspired young people in this country— even non-believers.

“The Pope’s down-to-earth appeal and outspoken concern for the poor, and those on the ‘peripheries’ makes him popular among the young, even those who wouldn’t describe themselves as religious. And these are the people Aleteia hopes to reach,” said Deal.

Connor Dwyer, one of the top finalists told Huffington Post that he is not Catholic but he admires Pope Francis.

“I feel like every time I read something about Pope Francis, it gets me so pumped and excited that someone so famous and influential is hugging lepers and bringing unity to nations,” Dwyer, a 23-year-old graphic designer from Atlanta, told The Huffington Post.

“And that’s why I’m so inspired, by his character and the legacy he’s already leaving. I feel like media, especially social media, can become so negative so quickly and people can focus on the awful things happening in the world,” he added. “But there’s so much good that’s going on and it’s such a breath of fresh air to be telling those stories.

The hash tag #GoodIsWinning originated with Pope St. John Paul II, who in his Easter homily in 1982, spoke of “good is winning” in reference to the Resurrection and Christ’s victory over evil.

Twenty to thirty Digital Street Team members will be stationed in each of the cities on the Pope’s schedule, and some members will be posting from their home towns. Three top winners were selected for an all expenses paid trip to the Pope’s destinations.

“We want to create a platform to allow them to tell their own stories,’ said Deal.

Not on the Digital Street Team? Join the conversation anyway with #GoodIsWinning.