Pope Calls for Missionaries of Mercy 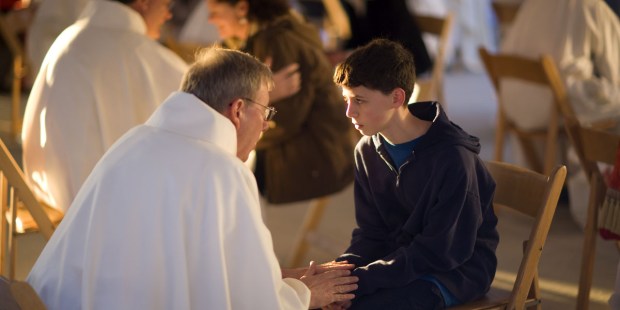 @DR
Clergy and members of the catholic church inside a confession tent, before Pope Benedict XVI celebrated a Mass at Nationals Park in Washington.
Photo by Brooks Kraft/Corbis
Share
Print
Fr Dwight Longenecker - published on 08/31/15

When you think of a missionary you might imagine a cross between Indiana Jones and John the Baptist. The word “missionary” conjures up the brave priests from the film The Mission—a crucifix in one hand and a rifle in the other.

While some have a positive image of missionaries, others might cringe. Missionaries are those eager young men on bicycles with white shirts, ties, name tags who come knocking on your door to hawk their odd religion. Maybe you think of missionaries as angry street preachers full of a message of doom and gloom, or maybe you simply think missionaries are out of date, out of touch and out of their minds. Can there be missionaries in this modern world or are missionaries outmoded?

Pope Francis has brought back the model of the missionary with an genuine plan action for the upcoming Year of Mercy which begins on December 8.  On Ash Wednesday, in a special commissioning service he will send out Missionaries of Mercy. The Pontifical Council for the Promotion of the New Evangelization is accepting applicants for those priests who want to be named missionaries. They will be granted “the authority to pardon even those sins reserved to the Holy See.”

Pope Francis wants them to be, “inspiring preachers of Mercy; heralds of the joy of forgiveness, welcoming, loving, and compassionate Confessors, who are most especially attentive to the difficult situations of each person.”

Priests who wish to be Missionaries of Mercy must be approved by their local bishop or religious superior. They are invited to apply at a Vatican website.

What might a Missionary of Mercy be like and what will he do? I can imagine this initiative of Pope Francis’ being very creative and positive for the church. A priest who is chosen as a Missionary of Mercy could work in a very quiet way within his own parish—hearing more confessions, holding more penance services and focussing his usual work around his new mission of mercy.

He might be appointed by his bishop to conduct a series of Mercy Missions around the diocese throughout the year of mercy. Powerful preachers are to be chosen, and inspired by the Holy Spirit they could bring true renewal and joyful repentance throughout a diocese.

Religious brothers like Fr. Bill Casey of the Fathers of Mercy, whose charism is preaching parish missions, might be chosen as a Missionary of Mercy and spend the year preaching special missions around the country. Fr. Donald Calloway and his brothers in the Marian Fathers of the Immaculate Conception, who operate the Shrine of the Divine Mercy in Stockbridge, Massachusetts, might be appointed Missionaries of Mercy for this special ministry in this extraordinary year. Around the world similar initiatives could be taken by religious communities already dedicated to evangelization and preaching.

At the heart of the Pope’s call for Missionaries of Mercy is the realization that our wounded world is crying out for genuine mercy. This genuine mercy is not soft and sentimental. It does not turn a blind eye to sin and spiritual sickness, nor is it simply a way to excuse a person’s sin. Instead, like a good doctor, the Missionary of Mercy will help to diagnose the sickness of sin and prescribe the medicine of repentance and the exercise of penance.

Too often the church’s teaching on sin is perceived as no more than angry priests making people feel guilty and ashamed. Pope Francis’ emphasis on mercy is his heartfelt attempt to help all of us see that it is the sickness of selfishness and sin that makes us unhappy, causes violence and rage in the world and brings about terrible suffering. Sin is at the root of our sad condition and the Lord’s mercy is the ointment that heals and brings new life.

Missionaries of Mercy will help humanity face the facts, and help us, like the prodigal son, to turn from the pigpen of our misery to begin the long journey home.