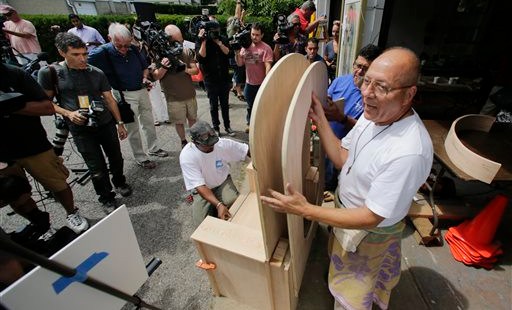 AP
Press gathers around the papal chair as Brother Sal Sammarco, right, and Fausto Hernandez, center, move it into place before a news conference Thursday, Aug. 6, 2015, in Port Chester, N.Y. Pope Francis will use it when he celebrates Mass in Madison Square Garden this September. (AP Photo/Frank Franklin II)
Share
Print
John Burger - published on 09/01/15

When you’re expecting a visit from the pope, there are three things you must have: an altar for the leader of the Catholic Church to celebrate the central sacrament of the faith, a pulpit from which he can preach the Gospel, and a comfortable place to sit and rest.

In a confluence of elements that will surely please Pope Francis, with his concern for the poor and for immigrants and his preference for simplicity, the Archdiocese of New York commissioned small teams of craftsmen to built the altar, ambo and presider’s chair the Pope will use when he celebrates Mass at Madison Square Garden Sept. 25.

Cardinal Timothy M. Dolan, archbishop of New York, said he and others planning the Mass wanted to have the furnishings made by “people who are particularly close to the heart” of Pope Francis—in particular, immigrants and troubled young people “who have beautiful skills and will use them for the glory of God and in the service of other people.”

So those working on the three furnishings are from groups that champion fair wages, worker safety and skills training, said Catholic New York, the biweekly newspaper of the archdiocese. Those groups, associated with Catholic Charities of the Archdiocese of New York, are located in cities just north of New York City: Don Bosco Workers Inc. Mission in Port Chester, N.Y., and Obreros Unidos Mission in Yonkers, N.Y.

The project also engaged young people who have been helped by a program to straighten out their lives. William Kelly, a master craftsman and wood-shop teacher, is directing three teenagers at Lincoln Hall Boys’ Haven in Lincolndale in making the oak altar and matching ambo. Lincoln Hall is a Catholic Charities-affiliated educational center that provides residential and community services for boys and their families. Youth are assigned to the program by family courts throughout New York State.

Salesian Brother Salvatore Sammarco, a veteran high school carpentry instructor, said his group worked from designs provided by the organizers and that are consistent with the Pope’s desire to keep liturgical furnishings “humble, pure and poor.” He said there will be no carvings or symbols on the chair, and that it will be covered with white canvas. “It’s not plush. It’s like eating at the kitchen table, not in the dining room,” Brother Sammarco told Catholic New York.

The day laborers working on the chair are from Mexico, Nicaragua and the Dominican Republic.

Gonzalo Cruz, director of Don Bosco Workers, said the project is “significant for us as Catholics. We represent justice for the workers and we’re happy to be a part of this.”

In addition to the furnishings, two women from Obreros Unidos have embroidered purificators for the Eucharistic celebration, with heart and dove designs to represent the Sacred Heart of Jesus and the Holy Spirit.

The space where the work is being carried out is owned by the Communications Workers of America, Local 1103, which also provides meeting space for the day laborers’ organization to conduct safety training and other programs throughout the year.

“The Don Bosco workers had been abused. We’ve had meetings with them over the last year and a half, offered assistance and helped them start their campaign against wage theft,” Kevin Sheil, president of Local 1103, told the archdiocesan newspaper.

At Lincoln Hall, meanwhile, Frank C., spoke with pride about his work on ​the altar and ambo. “I feel proud of myself to be doing this for the Pope,” he said. “It’s an honor I’ll tell my sons about. My family’s proud, too. They’re happy to see me do something good in my life.”

The students will be attending the Mass where their work will be put to use.