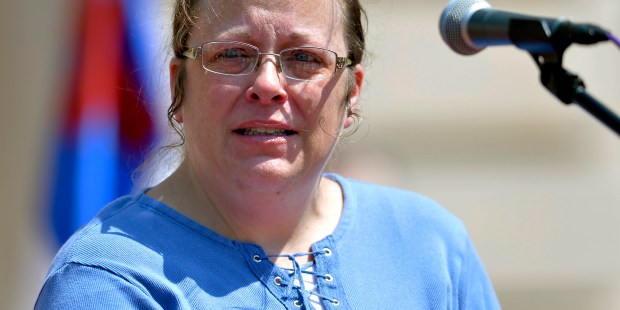 AP Photo/Timothy D. Easley
Rowan County Kentucky Clerk Kim Davis speaks to a gathering of supporters during a rally on the steps of the Kentucky State Capitol in Frankfort Ky., Saturday, Aug. 22, 2015. Davis spoke at the rally organized by The Family Foundation of Kentucky on Saturday afternoon. The crowd of a few thousand included churchgoers from around the state. Davis has been sued by The American Civil Liberties Union for denying marriage licenses to gay couples. She says her Christian faith prohibits her from signing licenses for same-sex couples. (AP Photo/Timothy D. Easley)
Share
Print
John Burger - published on 09/01/15

Kim Davis, the embattled Christian who refuses to issue marriage licenses to couples of the same sex, cited “God’s authority” when asked what gave her the right to turn down gay applicants.

A day after failing to find help at the nation’s highest court, Davis, the county clerk in Rowan County, Ky., was continuing to refuse marriage licenses on Tuesday.

She issued a statement Tuesday saying that in addition to her desire to serve the people of Rowan County, “I owe my life to Jesus Christ who loves me and gave His life for me.”

Following the death of my godly mother-in-law over four years ago, I went to church to fulfill her dying wish. There I heard a message of grace and forgiveness and surrendered my life to Jesus Christ. I am not perfect. No one is. But I am forgiven and I love my Lord and must be obedient to Him and to the Word of God.

She said that she never imagined she would one day be “asked to violate a central teaching of Scripture and of Jesus Himself regarding marriage.”

“To issue a marriage license which conflicts with God’s definition of marriage, with my name affixed to the certificate, would violate my conscience,” she stated.

It is not a light issue for me. It is a Heaven or Hell decision. For me it is a decision of obedience. I have no animosity toward anyone and harbor no ill will. To me this has never been a gay or lesbian issue. It is about marriage and God’s Word. It is a matter of religious liberty, which is protected under the First Amendment, the Kentucky Constitution, and in the Kentucky Religious Freedom Restoration Act. Our history is filled with accommodations for people’s religious freedom and conscience. I want to continue to perform my duties, but I also am requesting what our Founders envisioned – that conscience and religious freedom would be protected. That is all I am asking. I never sought to be in this position, and I would much rather not have been placed in this position. I have received death threats from people who do not know me. I harbor nothing against them. I was elected by the people to serve as the County Clerk. I intend to continue to serve the people of Rowan County, but I cannot violate my conscience.

Since the Supreme Court in June ruled that same-sex couples had the right to marry under the U.S. Constitution, Davis, an Apostolic Christian, has refused to issue licenses for gay or straight couples. On Monday the high court rejected her request for an emergency order allowing her to deny marriage licenses to same-sex couples while she appeals a federal judge’s order requiring her to issue them.

Eight people who filed a federal lawsuit against Davis in July on Tuesday filed a motion asking U.S. District Judge David Bunning to hold Davis in contempt of court, seeking fines but no jail time for the clerk, Reuters reported. They also filed a motion asking the judge to clarify that Davis must issue licenses to everybody, not just the four couples in the case.

Bunning ordered Davis and her deputies to appear in federal court in Ashland, Ky., on Thursday, said Joe Dunman, attorney for one of the couples who had sued.

Last month, the judge said Davis had to live up to her responsibilities as county clerk despite her religious convictions.

Kentucky Public Radio quoted Davis as saying on Tuesday that she made the decision to continue denying marriage licenses “under God’s authority.”

Bunning previously issued a preliminary injunction requiring the clerk to issue marriage licenses, but stayed that pending her appeal to the appeals court, which then rejected her request for a permanent stay saying she had little chance of prevailing.

A spokeswoman for Kentucky Attorney General Jack Conway said on Monday that his office is reviewing a request for a special prosecutor to determine if Davis committed official misconduct. She said on Tuesday morning a final decision had yet to be made.

Official misconduct is a misdemeanor punishable by up to 365 days in jail, the spokeswoman said.

The Christian Science Monitor noted that Davis is not alone among court clerks to raise religious concerns about the Supreme Court ruling. Texas Attorney General Ken Paxton, in a statement after the Obergefell ruling, suggested that court clerks can decline to put their name on a marriage license, but that they have to find a proxy to sign the documents.

Ryan T. Anderson, author of the new book, Truth Overruled: The Future of Marriage and Religious Freedom, said Davis should step aside and allow her office to issue marriage licenses.

The law requires a reasonable accommodation that does not place undue hardships on the employer—in this case the government. Saying your religion requires your entire office to stop issuing marriage licenses to everyone, while perhaps a sincere belief, cannot be reasonably accommodated without placing undue hardships on the citizens unable to receive their licenses in their county and forced to drive to another.

That the clerk in Rowan County couldn’t be accommodated does not mean that no clerk should ever be accommodated. Unfortunately, some activists on the left think all wedding professionals and civil servants should be forced to violate their beliefs about marriage or find a new line of work.

Anderson suggested that Kentucky follow the example of North Carolina, where a new law protects magistrates who object to presiding over ceremonies for same-sex “marriages” and clerks who object to issuing licenses to gay couples. “It also makes clear that no one can be denied a marriage license, but magistrates or clerks could recuse themselves from the process behind the scenes should they have sincere objections to same-sex marriage,” Anderson wrote.