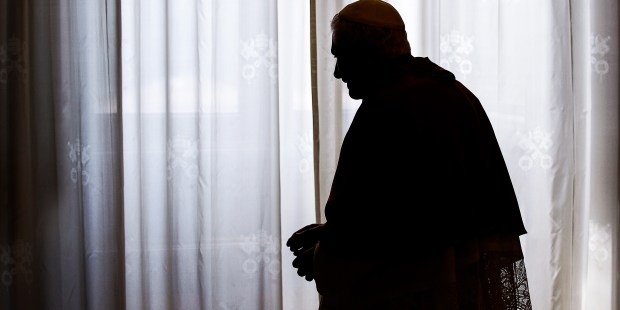 It’s not enough to preserve our lives, we must cleanse ourselves interiorly

According to the Vatican Insider, Pope Emeritus Benedict XVI presided over a mass this past weekend in the Vatican at the Teutonic Cemetery church where he considered the question of evil in our lives.

Speaking in German to members of the Schuelerkreis (his “student circle”), as well as a number of cardinals, Benedict said in his homily that while it is important to respond to “the many illnesses and sometimes epidemics that threaten us, by maintaining an external cleanliness,” and to care for ourselves so that we preserve our lives, it is not enough. There is  “the epidemic of the heart” to consider.”

“This inner epidemic ‘leads to corruption and other filth, the kind of filth that drives man to think only of himself and not of goodness,’ he said.”

“What does a pure man do? What is the real power of purification? How does one come to have a cleansed heart?” Benedict XVI asked. He then went on to answer:

“In another passage of the Gospel,” he continued, “the Lord says to his people: ‘You are already clean because of the word I have spoken to you’.” So we become pure by means of the Word: “The Word is Jesus Christ himself and we come across the Word even in those who reflect It, those who show us the face of God and reflect his meekness, his humble heart, his simplicity, his lovingness, his sincerity.”