Does the Pope’s Invitation to Mercy Extend to the Men? 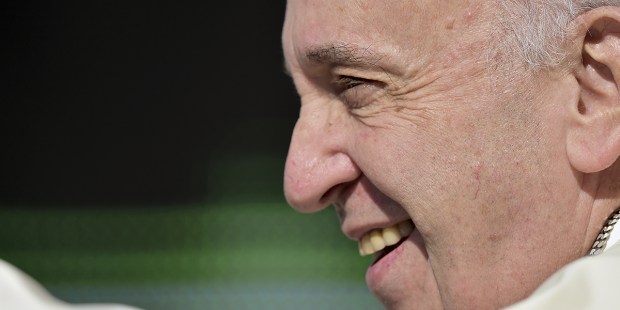 While it’s true women aren’t the only ones to blame for abortion, men need forgiveness too

My first days as Editor-in-Chief here at Aleteia have been so busy that I have, quite ironically, had little time to really consume news and news-by-products with my usual gusto, but this headline managed to penetrate my fog: American nuns’ abortion message to Pope Francis: ‘You don’t quite get it’.

The article was founded on a Facebook post that has been making the rounds, purportedly originating with the National Association of Catholic Nuns, who apparently have no website.

The NACN seems to appreciate the pastoral effort being put forth by Pope Francis as he extends priestly faculties during the Jubilee Year of Mercy, enabling all priests to forgive women who express contrition for past abortions. Still, pastoral outreach or no, they’re feeling pretty unaffirmed by His Holiness. They’re angry and if Francis is curious as to why, they have helpfully spelled it out for him:

The temptation to fisk the list — to respond, item-by-item, to this bellyaching from the Catholic fringe — was almost too great. But in the end, it would be too easy: whatever “moral authority” women may feel they have over their bodies, an abortion violently destroys someone else’s body, and no woman has the “moral authority” to commit murder; the pope in no way holds that “decisions made by a woman” are inherently sinful, but — in the land of reality — some decisions made by women are actually sinful, and abortion is one of them; yes, sperm is necessary for pregnancy, but that argument must acknowledge that eggs are, too; the pope’s action in no way proves that Holy Orders should be open to anyone except those called by the Lord, and it continues the practice of Popes proclaiming the mercy and love of the Creator for his created creatures.

That may a superficial fisking, so late me add that, in fairness to the NCAN, these sisters do suggest a point worth noting: in focusing so intently on the reconciliation of women who have procured abortions, the men who often encourage the procedure (and who sometimes force it) go unmentioned anywhere in the pope’s statement.

“This Jubilee Year of Mercy excludes no one,” writes His Holiness, and thanks be to God for that, and there is specific mention made that his proclamation means “to absolve of the sin of abortion those who have procured it and who, with contrite heart, seek forgiveness for it,” which could be interpreted to include any person who has encouraged or compelled a woman to seek an abortion, or has paid for the abortion, or has driven a woman to her dreadful appointment. Often, those persons are men.

In hindsight, perhaps someone — perhaps a woman, in fact — should have been by Pope Francis’ side, reminding him, as do these nuns, that “sperm makes babies!” and that there are thousands, perhaps millions of men who have played major roles in the procurement of abortions; who have contributed to an ongoing human holocaust with little understanding that — by their actions — they too have endangered their immortal souls and are under penalty of latae sententiae. They too are in dire need of the Mercy — of the healing and the reconciliation that can only be found through the sacrament of confession.

There is mercy for women, and His Holiness has made that abundantly clear, but there is mercy for men, too, and they must be informed not only that it is available for them, but that yes, indeed, if they have had any involvement with abortion, they are in need of it, as well. They must not be permitted to live in ignorance of that truth.

We talk a great deal, and rightly so, about the complementarity of the sexes in terms of relationship; this is an opportunity to talk about mutual responsibility within that complementarity, and the mutual need, sometimes, for mercy, as well.

The pope’s proclamation has been a curious thing; on the one hand, it almost seems extraneous; one is hard-pressed to think of a US diocese in which a bishop has not already given priests the ability to absolve the sin of abortion within the confessional; otherwise, given the ugly prevalence of abortion, even among Catholics, a bishop might spend the bulk of his time personally addressing one case after another, to the exclusion of his other duties.

On the other hand, in raising the issue so explicitly and dramatically — to the point where he has included otherwise-suspended priests in his extension — the pope may have reached the hearts of many, many women who have lived with a regretted decision, and thought there was no hope for them.

“…once you had not received mercy, but now you have received mercy,” wrote the very first Pope. In Christ, and within his Church, there has always been mercy, and it is a very good thing that women touched by abortion have been explicitly invited to share in it. But let us help the men to hear and understand that invitation, as well, and to know that mercy is also for them.