A Death on the Beach May Turn the Tide of History 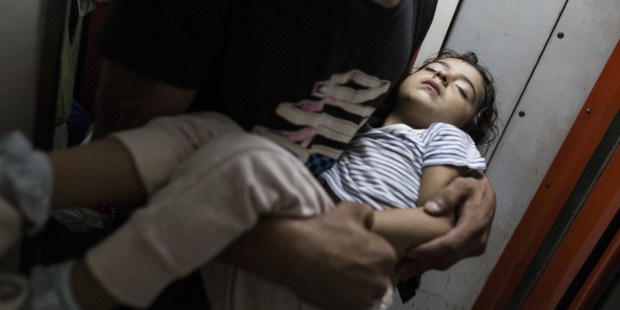 We are gasping in shock at the photographs before us: a toddler, someone’s little boy, his lifeless body washed up to shore and recovered. A heartbreaking death, in pursuit of the hope for life.

What will we do about it?

Purportedly, the last words of G.K. Chesterton were, “It is between light and darkness, and everyone must choose his side.”

Those words might also be the key to understanding Pope Francis, who pronounced them just about two years ago, fairly early in his pontificate. In an ordinary weekday homily at Casa Santa Marta, Francis said:

“One cannot know Jesus without getting oneself involved with Him, without betting your life [on] Him. When so many people — including us — pose this question: ‘But, who is He?’, The Word of God responds, ‘You want to know who He is? Read what the Church tells you about Him, talk to Him in prayer and walk the street with him. Thus, will you know who this man is.’ This is the way! Everyone must make his choice.”

Both Chesterton and Francis bring a challenge to a rather dithering age, where — all around us — we see people in leadership positions hedge their bets; they hesitate to make a strong pronouncement, or take decisive action, for fear of making a mistake.

Part of that urge to hold back, to play things close to the vest, or delay decisions for as long as possible, resides within a simple human instinct to protect oneself and one’s reputation, or one’s position of authority and power. Part of it may be rooted in an increasing conviction that if one does nothing, and says nothing, the world keeps spinning, and nothing much truly changes, from day to day.

That is only an illusion, though. In reality, indecision is what brings us the destruction of antiquities — temples and shrines, graves and artifacts forever lost to civilization — by modern iconoclasts and agents of chaos who appear to want nothing more than to watch the world burn. It brings us stories of refugees drowned at sea, suffocated in trucks, and — in a particularly disquieting echo of past evils — hauled off of trains and numbered, like less-than-human units of trouble. Human beings to be feared because there are “just so many of them” seeking…seeking what?

Escape. Sanctuary. A life in which their children can learn, and play, and grow. A life where they are not being hunted, like animals, or displaced like disposable things, or threatened, every day, with death.

They seek light over darkness, death over life.

“Everyone must make his choice,” said Chesterton and said Francis; two men — neither fathers of biological offspring but spiritual fathers to many — formed of a profoundly pro-life and family oriented Church, and defined by the Gospel. They are giving us a warning as we watch families struggle to stay together in the midst of terror and persecution, as we watch human life being held cheap by barbarians of the East (and their more sterilized counterparts of the West, see Parenthood, Planned).

It is a warning about what is directly before us.

Francis and Chesterton were of a single mind about choices, but Chesterton also reminded us that, “when you choose one thing, you reject everything else.”

In the Judeo-Christian tradition, we love to quote Moses in Deuteronomy Chapter 30: “I have set before you life and death, the blessing and the curse. Choose life, then, that you and your descendants may live…”

Right now, we are watching people who are trying to live, and a world unsure that it can materially or culturally afford to let them. Out of that human instinct to self-protect, and to not be accountable for any mistakes, the world is panicking, and worrying about how they will manage as persons, if they make a choice for life. How will they manage as politicians if the voters don’t like it? How will they manage as sovereign nations, given the extra burdens, both moral and social?

Europe, where nations and customs and traditions and identities — and Western civilization itself — were formed and sustained by Christian churches, faces a defining moment. Whether among their citizenry there remains enough Christian sensibility to enable their trust in the providence of God, is at this point debatable; it is unknowable. In the face of a seemingly impossible situation, the well of authentic faith in something larger than obvious solutions may be nearly dry. Hungarian Prime Minister Viktor Orban has decried the influx of refugees from the Near East:

Orban said his country was being “overrun” with refugees, adding most were not Christians, but Muslims.

“That is an important question, because Europe and European culture have Christian roots. Or is it not already and in itself alarming that Europe’s Christian culture is barely in a position to uphold Europe’s own Christian values?”

That is the question of the hour: does Europe (and, yes, does America, the “Christian nation”) have what it takes to make the harder choice — the choice for life, and for families, and for the exceedingly-difficult-but-humane thing, which Moses said would bring blessings — or will it fall back on the easier one, the choice that preserves an illusion of sustained material comforts and requires less trust in Christ, less daily walking with Christ, and finding Christ, amid strangers?

Chesterton was correct: to choose one thing is to reject all else. To choose what is easy is to reject a little brown-haired boy dressed in a red shirt.