What Will Pope Francis Say to Americans? 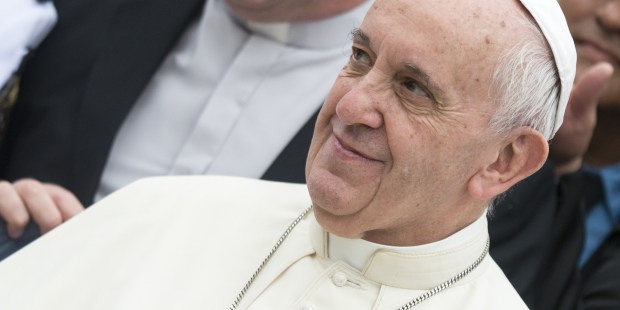 Will Pontiff take the chance of even lower numbers in the Gallup poll?

Journalists are understandably fond of conflict. After all, it gives them something to talk about. Media coverage and commentary relating to a drop in Pope Francis’ popularity rating in a recent Gallup poll was an illustration of that.

Religion News Service voiced a common reading of those numbers among journalists in declaring the Pope’s “once Teflon-grade popularity” had been taking a beating.

What the media didn’t say—but what the numbers show—is that Francis remains enormously popular in the U.S.

Yes, the Pope has irked various groups. Among these climate change skeptics, ideological defenders of free market capitalism, gay rights advocates who think he hasn’t done enough for them, social conservatives who think he’s done too much for gay rights, unrelenting anti-Castro Cuban-Americans, and probably a few others.

In a way, the negative reactions aren’t surprising. Francis is a notably free-swinging pontiff. On the eve of his September 22-27 U.S. visit, though, the obvious question is: what difference does this make to the success of his trip? The answer: probably not much.

The crowds will still be huge and enthusiastic. There will be moving public gestures like a visit to a Philadelphia prison and a Catholic Charities center in Washington, D.C. There will be impressive liturgies and dramatic pomp and circumstance events as the Pope meets with President Obama at the White House, addresses Congress, and speaks to the world via the United Nations.

And at the center of it all will be the same charismatic white-clad figure who has shown himself to be one of the most crowd-pleasing world leaders in a very long time.

What will the Pope say during his visit? Certain themes are obvious: protecting the environment and taking urgent action on climate change, world peace, helping the poor and marginalized, including immigrants, the multiple evils of consumerism and a culture that values technology over concern for the person, the need to protect and cherish marriage and family life.

Probably, too, Francis will speak about the growing persecution of Christians in the Middle East, parts of Africa and Asia, and other places. That is it should be. But persecution, more subtle but no less real, also is on the rise in the United States. Here’s hoping the Pope speaks out strongly against that as well.

This will be Francis’ first time in the United States. Like many people from other nations, he may well share the historic image of America as a bastion of religious freedom and tolerance. For so it has been, and so for the most part it remains even today.

Yet alongside religious freedom and respect for others’ conscience-based values and beliefs, a new spirit of intolerance is currently abroad in the U.S. Driven by secular ideology, it is directed against religious institutions and individuals with the intention of forcing them to fall in line with public policies and practices that conflict with the deeply-held values of their faith traditions.

Strong papal words on this subject might not sit well with yet another group—the secularist true believers who are so prominent in the American media. But even if that should end up costing Francis a couple more points in the next Gallup popularity poll, it would be well worth it.