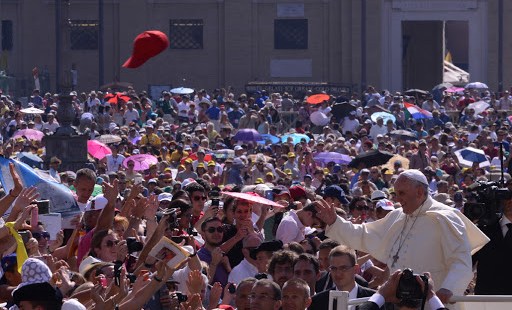 The Pope dedicated his weekly catechesis to the link between the family and the Christian community, a relationship called “natural,” since “the Church is a spiritual family and family is a domestic church.”

The Pontiff renewed his appeal on Twitter on September 8:

May every parish and religious community in Europe host a refugee family. #Jubilee #refugeeswelcome

The Church, the Pope said on Wednesday, is the home of those who believe in Jesus Christ as the source of the unity of the entire human family.

“The Church journeys amid peoples, amid the history of men and women, fathers and mothers, sons and daughters: this is the history that counts for the Lord,” he said.

The Pope continued: The great events of worldly power “are written in the history books, and will remain there, but the story of human affections is written directly on the heart of God, and that is the story that remains in eternity.”

“The family is the place of our initiation … into this history, into this history of the fullness of life, which will end in the contemplation of God for all eternity in Heaven, but it begins in the family.”

“That is why the family is so important,” he said.

Jesus himself, after living for thirty years in the midst of the family in Nazareth, gathered an assembly, a community of persons around himself, which is the Church.

And the Gospels, the Pope explained, tell us that Jesus chose to form a community which welcomes all who wish to hear his good news of the Father’s love.

The Church “is not an exclusive, closed sect: in it we find Peter and John, but also the hungry and the thirsty, the stranger and the persecuted the sinner and the publican, the pharisees and the crowds,” he said. “And Jesus does not cease to speak with everyone, even with one who no longer expect to encounter God in his life.”

Pope Francis said this is a powerful lesson for the Church. “The disciples themselves are chosen to take care of this assembly, this family of God’s guests.”

Indeed, families and parishes are the two places where we encounter, in every age, that communion of love which has its ultimate source in God.

“A Church that is truly in accord with the Gospel cannot but be a welcoming home, with the doors always open,” he siad. “Churches, parishes and institutions, with the doors closed should not be called churches, they should be called museums.”

Just as our families are domestic churches, our parishes are called to be welcoming families. This “covenant” has to be renewed, with the courage and vision born of faith, so that these centers of love, evangelization, and solidarity can, with the help of God’s grace and despite all our limitations, work true miracles for the shaping of a more fraternal and humane world.

“At Cana,” the Pope concluded, the Mother of Jesus, the ‘Mother of Good Counsel’ was present. Let us listen to her words: ‘Do whatever he tells you’ (cf. Jn 2:5).

“Dear families, dear parish communities,” he said, “let us allow ourselves to be inspired by this Mother. Let us do all that Jesus tells us and we will see miracles, the miracle of every day.”