From Campus to Convent, Sisters Grateful for Catholic Education 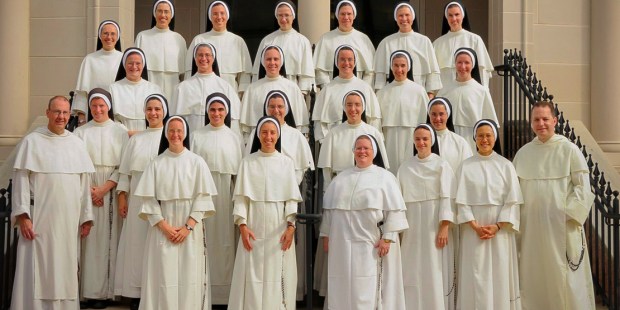 Being true to your calling can do a lot of good, especially if you’re a college

A Catholic college education can be a significant help in discerning a religious vocation, say several of the Dominican Sisters of St. Cecilia, whose experiences at faithful Catholic colleges were instrumental in their journey to religious life.

The Sisters of St. Cecilia, based in Nashville, Tenn., take as their charism a contemplative focus, active apostolate, strong community life and love of the Church. The Sisters have a particular emphasis on education, and many serve as teachers and school administrators around the world, including four high schools recognized among the best in the country according to The Cardinal Newman Society’s Catholic Education Honor Roll. These include Saint Cecilia Academy in Nashville; Mount de Sales Academy in Catonsville, Md.; Knoxville Catholic High School in Knoxville, Tenn.; and Saint John Paul the Great Catholic High School in Dumfries, Va.

Each vocational story is unique, but it is noteworthy that the Sisters’ college educations often played a pivotal role in pursuing their vocations, whether that be through the revealed truths of theology and philosophy classes, the integrated prayer lives offered on campus, or programs that provided exposure to various religious orders.

Several of the sisters were particularly impacted by the classes they took. For Sister John Catherine Kennedy, O.P., two classes in philosophy and humanities at The Catholic University of America in Washington, D.C., “deeply altered my worldview and set me on the course to discovering and living my vocation,” she told the Newman Society. She explained that these courses were tremendously formative to her growth: “I found myself encountering and grappling with the Lord Jesus and His earliest followers in a way I had never even known was possible.”

Sister Daniela Bennett, O.P., had a similar experience at Benedictine College in Atchison, Kan. “It was in my theology classes at Benedictine that I began to fall in love with Jesus Christ and His Church,” she explained. “There were so many things I did not know and everything about the faith seemed to come alive.”

Sr. Bennett had previously attended public school, so she had “little knowledge of the deep truths of the faith.” But she credits Benedictine with planting “the seeds of truth” during her studies and subsequently guiding her discernment.

Perhaps ironically, a theology class on Christian marriage at the University of Dallas generated the “first spark of desire to be a religious sister” in Sister Anna Laura Karp, O.P., a member of UD’s class of 1994. The theology professor explained “that through marriage, spouses are called to help each other reach union with God; but that God calls some people now to live a life totally consecrated to him, bearing witness to the divine love union that all are destined for.” As the professor spoke, Sr. Karp felt “a desire like nothing else” to participate in the consecrated life and from there, her desire only deepened.

Aquinas College in Nashville, Tenn., was originally founded as a teacher-training school for the Dominican Sisters of St. Cecilia and later transitioned to a four-year college. Sister Anna Margaret Smith, O.P., began her education at Aquinas College as she was already living her Dominican vocation, so the College nurtured her “intellectually and spiritually, particularly because the professors at Aquinas beautifully integrate the faith into their teaching, no matter what the subject may be,” she said.

The Sisters also spoke of how these colleges facilitated direct exposure to religious orders, which proved invaluable in developing their spiritual lives. It was during her education at Franciscan University of Steubenville that Sister Imelda Ann Dupuis, O.P., “first met joyful religious” through the Franciscan Friars. Their example inspired her, as they were “men living in community, teaching at the University, wearing the habit… and in the modern world.” Through their example and a friend’s encouragement, Sr. Dupuis visited St. Cecilia Motherhouse and felt God’s call to the Dominican Sisters of St. Cecilia.

Sister John Thomas Armour, O.P., another alumna of the University of Dallas, met the Dominican Sisters of St. Cecilia during her Rome semester with UD. She “felt an immediate connection” and credited UD with preparing her to find “my peace in His will” and introducing her to “the community that would be my future family.”

Learning in an environment that actively encourages spiritual growth is also an important factor in discernment. Sr. Kennedy’s time at CUA “formed the habits of daily Mass and prayer and regular confession that remain central to my life,” she shared. “The truth about the human person and what makes for human flourishing that I discovered at CUA continues to deeply influence my own understanding of what it means to be human.”

Sr. Karp said that there were not words to describe the full impact of her education at the University of Dallas. “The core curriculum provided such a broad and deep intellectual foundation; the professors taught with such zeal for truth and beauty; the Rome program brought history and art to life; and my classmates really lived their faith.” These elements worked together to expose Sr. Karp to an “experience of beauty, truth and goodness” that gradually prepared her “to receive the gift of a religious vocation.”

“The motto of Cardinal Newman—‘Heart Speaks to Heart’—is the model for education, which is bringing people, especially the young, into an encounter with the person of Jesus Christ, Who is Truth in Person,” said Sr. Thomas. The liberal arts forms “minds to reason, discern and judge in accord with reality… such an education can only be accomplished person to person, or heart to heart.”

“A well-rounded education can open one up to truth in so many different avenues, and ultimately the human heart longs for truth,” Sr. Bennett reflected. And a classic liberal arts education in philosophy can particularly “help young people learn to think clearly and discern the various messages they receive from society,” said Sr. Smith.

Modern culture is “so focused on productivity and technological progress,” which means “young people need to be deeply grounded in what it means to be human,” Sr. Dupuis remarked. “By bringing the student face to face with truth, beauty and goodness, they allow him to focus on being human, rather than giving in to the propaganda that the worth of a human being is measured by what he accomplishes.”

As students begin a new school year, the inspirational stories of these sisters are evidence that a faithful college education can be indispensable not only to students’ academic and intellectual growth, but also to their spiritual formation and personal vocation. But finding a college that provides this sort of education can be difficult. Each of these Catholic colleges attended by the Sisters is recognized by The Newman Guide for its strong Catholic identity.

Kimberly Scharfenberger is a communications assistant at The Cardinal Newman Society, which promotes and defends faithful Catholic education.