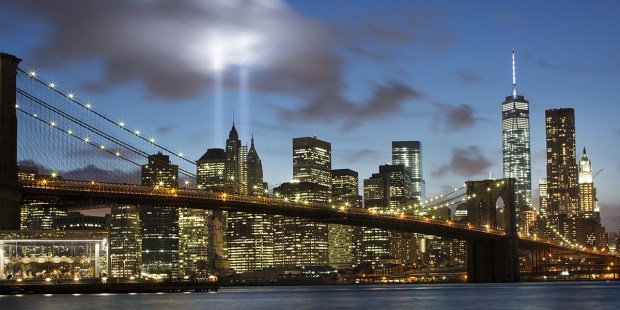 AP Photo/Mark Lennihan
FILE - In this Sept. 10, 2014 file photo, the Tribute in Light rises behind the Brooklyn Bridge and buildings adjacent to the World Trade Center complex in New York. The tribute, an art installation of 88 searchlights aiming skyward in two columns, is a remembrance of the Sept. 11, 2001, attacks. The New York City licensing test for sightseeing guides includes questions about the bridge and the trade center. (AP Photo/Mark Lennihan, File)
Share
Print
John Burger - published on 09/11/15

It was a time of uncertainty. Are we any more sure today of where we’re going?

The Twin Towers were like bookends in my life. I began working at a newspaper in New York with an article about the first attack, in 1993. I wrapped up my gig at that paper eight and a half years later, just before the towers fell in 2001.

Freshly unemployed, I was at home in Queens the morning of September 11, setting up a home office. I had plans to meet a photographer for lunch in midtown Manhattan, to discuss a book project.

The passing minutes, of course, revealed a more horrible scenario, and by the time it was apparent that this was an attack, the dominant spirit that took over was uncertainty. Rumors, warnings and speculation abounded–including the chance that more hijacked planes were aloft and that the underground tunnels of the transit system may be subject to a poisonous gas attack. The entire subway system was shut down, and life seemed to have come to a perilous standstill, as if we were all sitting ducks.

Having lived through social unrest in a foreign country before, I had a sense of what to do during emergencies, like filling the bath with cold water, in case the water were vulnerable. I cancelled my lunch date and called family members to let them know I was okay.

But I felt the need to get out and be with others, perhaps for mutual comfort and support. I couldn’t go far beyond my little neighborhood, unless I wanted to start walking. At times my imagination got the better of me, and I thought about walking toward the suburbs and rural areas of Long Island.

Instead, I went to our neighborhood church, where women coming out of the Tuesday morning Mass were exchanging news and opinions. I sat in the chapel, trying to find some peace in the midst of an unprecedented event. I called to myself the presence of Christ and stared at the sunlight as it fell upon the floor, filtered through the stained glass.

A young woman broke the silence when she came through the doors, went straight to the front and knelt down in a pew on the other side of the aisle. She was crying almost uncontrollably, and I asked her if she would like to pray together. She shook her head and was almost unintelligible: “My parents were married here, my brothers and I were baptized here.” All I could think when she left was that she had just received some very bad news.

I realized that an occasional booming sound I kept hearing could not be the elevated subway just outside, because it was supposed to be shut down. “What more attacks are we experiencing?” I thought. I stepped outside but found nothing. Across the boulevard, streams of people were walking eastward, away from the center of the city. Most were dressed for work, some were carrying bags and valises. I tried to ask a few of them what they had witnessed, but the only person who wanted to talk said to me in what I thought was a Polish accent, “I don’t know. All I know is this: No more immigrants! No more.”

At noon the school held a prayer service for the hundreds of children who would be waiting for their parents to pick them up. A teacher began the service by leading the singing of “Let there be peace on earth, and let it begin with me.”

It was apparent to the pastor that that sentiment expressed by the Polish worker was going to have the upper hand in America’s reaction to the attack. Young foreign men had come here legally–to study aviation.

“My parents came to this country from Ireland,” the pastor told the school children. “Whatever happened today must never lead us to think that people who come to America seeking a better life should be stopped from coming here.”

Now, as we commemorate the 14th anniversary of the 9/11 attack, that question again presents itself. Millions of people have been displaced by years of turmoil in the Middle East, particularly Syria, Iraq and Afghanistan. Hundreds of thousands of them are pouring into Europe, apparently looking for a better life. Many have come and will come here, to the United States. Will the new wave of refugees and asylum seekers include those who seek to do us harm? Will our public officials do their utmost to protect us from such threats? Will we ever find a solution to the endless conflicts that force people to pull up their roots and seek security elsewhere?

9/11 is a significant chapter in American history now, and yet, are we a nation that values the study of history? Recent surveys of American college students, which have found that many cannot even answer basic questions about the founding and development of our country, make me wonder if we are. Seeing young people spend so much time on video games, social media and other diversions and passively absorbing so much disinformation from television makes me wonder if we as a people are losing the ability to read and learn. In the uncertain days and weeks following 9/11, it was reading history that gave me a certain peace, a reassurance that we as a people have been through difficult times before–and survived.

More importantly, are we learning from history so that we can decide with wisdom what to do and what not to do in response to current crises, such as the rise of Islamic militancy? How can and should we as a Christian people, with a sense that Christ is the Lord of History, respond to today’s news?

Pope Francis will visit the 9/11 Memorial in New York in a couple of weeks–a hallowed place where thousands were slaughtered because of an ideology with a history. He comes to a country that in many ways has an air of uncertainty, sort of like the unsettled time after 9/11–of not knowing what is coming next, of not having a strong sense of direction, of not thinking together of where we as a people are going.

We pray that the Pope offers Christian wisdom, which may help set our course.

Let us be attentive.