“Show Me a Hero” Tackles Race, Housing, and the Fight for Justice 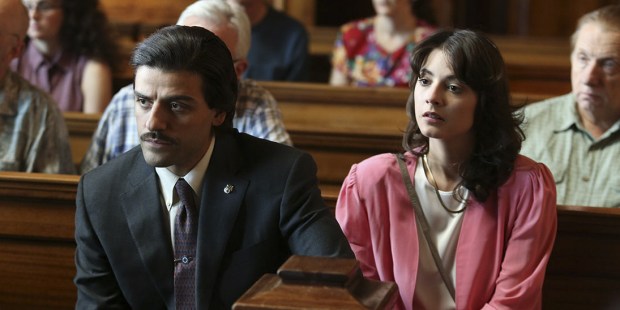 “In the fields of the lord, stood Abel and Cain

At night he couldn’t stand the guilt or the blame
So he gave it a name.”

Springsteen’s lyrics play throughout HBO’s “Show Me a Hero” – but “Gave It a Name,” which opens the first episode, cuts to the heart of the story.

The six-episode miniseries soars on Oscar Isaac’s performance as Nick Wasicsko, the embattled mayor of Yonkers in the late 1980s. Wasicsko was the youngest person to ever hold the office, but was best known for the issue that catapulted him into the spotlight: the battle over the court-ordered establishment of 200 public housing units on the east side of the city.

David Simon (“The Wire”) paints a compelling portrait of a man caught between two Yonkers: the black and Latino families of the Schlobohm projects eager to take advantage of the improved housing, and the affluent white residents of the “Save Yonkers Federation” eager to keep them out. This very public and very heated debate (which didn’t fully resolve until 2007) put the spotlight on de facto segregation in America and deep-seated social tensions that linger to this day. In fact, as Simon has pointed out in press interviews, the same kind of local battles are raging right now elsewhere in Westchester County.

“Show Me a Hero” isn’t shy about pulling racial implications out of this long, impassioned debate. (“You will never hear Jack O’Toole utter a racist phrase, cause guys like that, they learn how not to say the bad words,” Wasicsko observes of the Save Yonkers leader. “It’s all property values, and life and liberty, and people aren’t living where they can afford. Underneath it all, it’s fear. Same as it ever was.”) But Simon also wants to paint a complete picture; he doesn’t paper over the gritty, painful realities of poverty that the east side insists it’s concerned about. From drug dealing to homes broken by absent fathers, the struggles of these families are always front and center.

But the narrative pushes us deeper, into the concrete personalities swept up in these dire circumstances – a task that so much of Yonkers didn’t seem up to. To most of the court, council, and federation, these residents were just a nameless, faceless mass, a chess piece in a power struggle. But the more Simon brings us face to face with them, the more universal their struggles become. Desire, anxiety, hope, boredom, “the blame”; all of it swirls in the hungry hearts of Schlobohm, same as anywhere. Mary Dorman, a fierce advocate against the housing who unwittingly ends up on a board tasked with interviewing the new residents, quickly realizes that she wants nothing more than to be a good neighbor to her old adversaries. She sees that a common struggle in Yonkers – their brokenness, and hope for redemption – runs deepest and matters most.

Nick Wasiscko builds a career on this insight, but never really grasps it himself. Given the show’s title, you’d think Wasicsko is the happy warrior of the housing initiative. But it’s actually half of a line from Fitzgerald – “show me a hero, and I’ll write you a tragedy” – and Wasicsko’s story is just that. He’s a shadow of all the city’s conflict, mirroring its motion and its shape, but himself a sort of empty vessel. The former cop and loyal Democrat distinguishes himself from his primary opponent by resisting the court with a series of legal appeals; when he wins the election and the appeals fail, he leads an effort to comply with the housing for the good of the city; and when the council (and much of the city) turns their back on him, he’s left scrambling to do whatever he can to distance himself from the housing issue and salvage his crumbling reputation.

Throughout it all, he’s never hot and never cold, but always the consummate lukewarm politician. When an old friend calls him out in the final episode (“Do you even believe in anything? Anything other than yourself?”), we realize she couldn’t be more spot on. Wasicsko is empty, and too shrewd not to see it.

In Laudato Si’, Pope Francis called the lack of safe and affordable housing a “major issue for human ecology.” Simon’s new miniseries shines a spotlight on this issue, reminding us that we don’t need to visit a third world slum to find opportunities to fight for the least among us on this front.

More unexpectedly, “Show Me a Hero” is as much about our equal infirmity as our equal dignity. The Boss sings about sin in the show’s first episode; and in the last frames, a funeral mass leaves us with a glaring image of its wages, and a renewed sense of urgency in the fight for justice.