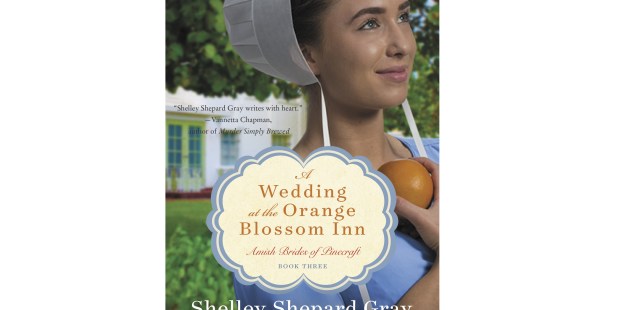 A “bodice-ripper” it is not.

Is there true love among the Amish? The novel tells all.

She doesn’t even know his name, nor does he know hers, but twice she has said to herself that he is incredibly good looking. He was “one very handsome man with dark blond hair, a neatly trimmed beard, and very light blue eyes.” That’s page five. The second time, after he has asked her name, a “whole other feeling came over her as she noticed again just how attractive he was.” That’s page seven.

Catching the drift here? This is a romance novel and that’s part of the formula for making one. The couple must meet early at the story’s beginning and it must portend great things. So within the same nine pages we find that Jay, his name we learn, is widowed with three sons. Coincidentally, Emma reveals she has three daughters and she is also widowed. This, too, is the formula; we must know quickly why their situation makes the coming romance inevitable.

Grey’s novel, one of twenty-five she has successfully published, is also sprinkled with German: danke, kinner, jah, daed, nee, haus, wunderbarr. Sometimes the word is said in English and then repeated in German, and the other way around. The characters just seem to like bilingual repetition.

But mostly, since there are few others clues, it is so readers will be reminded this is an Amish romance novel and the characters are still in touch with their inner Deutsche. It is representative of a large sub-set in the wide array of romance novels being authored by Christians, including Catholic authors, yet it appears to be a field dominated by Evangelicals.

The Amish novels go by an inelegant street name: bonnet rippers. This is to distinguish them from the more lurid, but no less formulistic, bodice rippers, where religion doesn’t pretend to intrude.

There’s not much of anything getting ripped here; these are Amish folk, after all. Still, there are a lot of speculative glances, plenty of hints about a widow and widower with six kids between them, and lots of hands brushing for just an instant too long.

Like other romance stories, bodice or bonnet, the formula requires the couple to confront obstacles to the romance and complications in the way of happiness: self-doubt (usually the woman’s) to overcome, feelings that need reassurance (again, the woman’s), other relatives to placate (people warning the girl from hasty action, naturally).

Yet in all of it, with a little patience, even a little grit, everything works out. Which, as it happens, is very much the point in a romance formula. Everything works out and true love cannot be denied. There must be an optimistic conclusion, but something more subtle than “and they lived happily ever-after.”

Equally, the male protagonist must assume headship. The novels aren’t misogynistic, but there is an assumed preference for the way things ought to be: he, Man; she, Woman. At the very end of this novel, Jay tells Emma her unruly dog belongs on a leash, which is where it’ll be after they’re married. Finally, somebody, a man, steps up to rescue Emma from her own indecision, and the proper order of the universe is restored.

What do we learn about the Amish in an Amish romance novel? Not much, I’m afraid. In Pinecraft (a genuine place with a large Amish population) they seem to eat a lot of pizza, scout the local park where Amish teens hang out, pepper their conversations with a snatched German word or two — and they have large families. But of the piety, the ethos, Anabaptist theology, the separation from “the world,” there is precious little of that. How does their faith aid or hinder the relationship? What does it say to the rising passions of a romance? To judge by this book, very little.

This assumes of course that women ultimately are unable to distinguish fiction from life and, like the women in the novels they shouldn’t read, need somebody to take them firmly in hand. None of that has stopped the explosive growth Christian romance novels have experienced.

Within the formulistic confines common to romance, Gray is a fine writer with an ear for dialogue. Mastering the formula, I suspect, is the hardest part to a romance novel. Even the formula, however, will not compensate for poor writing. Reading Gray’s novel―the first I’ve ever read; oh, the things I do for Aleteia―has increased my respect for romance. Frankly, that’s not saying much, since I had none beforehand, and I am far from saying everyone should read it. But if Amish romance sounds the least bit interesting, Gray’s work might be a place to start.

Russell E. Saltzman, Aleteia’s  book review editor, is a web columnist at First Things and lives in Kansas City, Missouri. He can be reached russell.e.saltzman@gmail.com.