Colbert of the Cross 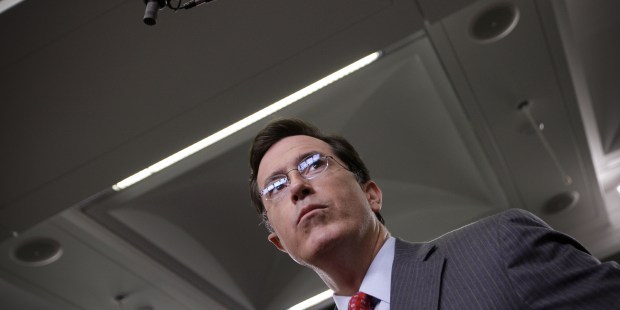 Fans of both the Colbert Report and Late Night have been wondering who exactly would show up to take Letterman’s spot in September. As expected, Colbert has abandoned the satirical Comedy Central character, but is keeping much of the flamboyant “cable news” format that made him such a huge hit. The “real” Colbert is, in many ways, the same old character you know and love (or hate).

But the Biden interview was bewildering terra incognita, and a sign that Late Night just became a place for big questions. Colbert gently moved the conversation to the recent loss of Biden’s son Beau, and without much comic relief to speak of, the two talked about grief and suffering, the solace of liturgy and prayer, and their shared Catholic faith. The video struck a chord, raking in millions of views on YouTube.

Slate Magazine recently hailed the non-confrontational Jim Gaffigan as America’s Top Christian Comedian. But even if Gaffigan’s beliefs are less “all up in your faith”, the Biden interview (not to mention the cathedral-like dome in the renovated CBS studio) prove that Colbert is more significantly shaped by the logic of faith, and more willing to “go there” with audiences, even if that just means poking fun at himself. The Jim Gaffigan Show incorporates the everyday realities of Catholic life – crucifixes, a parish priest, confession – but all of it is like the soft (albeit atypical) background hum on which Gaffigan goes in on food, family, and awkward social situations. Colbert’s character, on the other hand, was a sanctimonious blowhard who constantly trumpeted his piety like any good Pharisee.

The “real” Colbert is no less candid about his Catholicism. But a recent 45-minute interview with Salt and Light TV reveals a thoughtfulness his alter ego could only dream of. Colbert explains to Fr. Thomas Rosica why he sees the sacraments (especially the Eucharist) as off-limits for jokes, references St. Anselm and St. Aquinas, and talks at length about CS Lewis’ The Screwtape Letters:

Rosica is intrigued by the nickname Colbert and his writers had for their show behind the scenes: “the joy machine.” “Somehow, when it was hardest, it would often feel the most joyful,” Colbert explains. “The only way to approach something that’s really hard, it’s got to be with joy, because if you don’t approach it with joy, it’s just a machine and it’ll grind you up.”

Toward the end of the interview, Rosica asks Colbert what question he would pose to Pope Francis if he got the chance to interview him, and he responds: how do you achieve joy? “The message of joy that he wants to spread right now can be seen as not revolutionary,” Colbert says, “but a manifestation of something that was always there.” As to what Pope Francis might say that is, the answer is not something you normally hear from a man that’s paid good money to make people laugh: “The message of ultimate sacrifice that Christ shows us on the Cross.”

Christian triumph, Pope Francis wrote in “The Joy of the Gospel,” “is always a cross.” And the more Colbert bares his soul, the more the cross – the summit of all Christian hope – comes into view. As Biden pointed out in his interview, Colbert is acquainted with grief too. On September 11, 1974, Colbert (then just 10 years old) lost his father and two of his brothers in a plane crash. He relived this defining event in an interview with GQ published just before his Late Night debut:

I was raised in a Catholic tradition. I’ll start there. That’s my context for my existence, is that I am here to know God, love God, serve God, that we might be happy with each other in this world and with Him in the next – the catechism. That makes a lot of sense to me. I got that from my mom. And my dad. And my siblings.”

He was tracing an arc on the table with his fingers and speaking with such deliberation and care. “I was left alone a lot after Dad and the boys died…. And it was just me and Mom for a long time,” he said. “And by her example am I not bitter. By her example. She was not. Broken, yes. Bitter, no.” Maybe, he said, she had to be that for him. He has said this before –that even in those days of unremitting grief, she drew on her faith that the only way to not be swallowed by sorrow, to in fact recognize that our sorrow is inseparable from our joy, is to always understand our suffering, ourselves, in the light of eternity…

That might be why you don’t see me as someone angry and working out my demons onstage. It’s that I love the thing that I most wish had not happened.”

I love the thing that I most wish had not happened.

I asked him if he could help me understand that better, and he described a letter from Tolkien in response to a priest who had questioned whether Tolkien’s mythos was sufficiently doctrinaire, since it treated death not as a punishment for the sin of the fall but as a gift. “Tolkien says, in a letter back: ‘What punishments of God are not gifts?’ ” Colbert knocked his knuckles on the table. “ ‘What punishments of God are not gifts?’ ” he said again. His eyes were filled with tears.

Chesterton wrote that the cross is the crux of everything, a kind of paradoxical conflict that stretches out eternally, breaking through endless circles of arguments along the way. It’s not just a symbol, but an invitation to the ultimate juncture of all suffering and joy, justice and mercy, death and life. It’s a stumbling block to some, foolishness to others – and for many modern Christians, a religious platitude that borders on obsolescence.

But for the new host of Late Night, it’s never far from view, which might be why he made its sign across his forehead and chest during his first monologue. Quoting his mother, Colbert jokes with Biden at one point: “What’s the point of being Irish if you don’t know that life can break your heart?” That’s the joy of the cross; and true to form, the new Colbert – the true Colbert – is funnier than ever before.