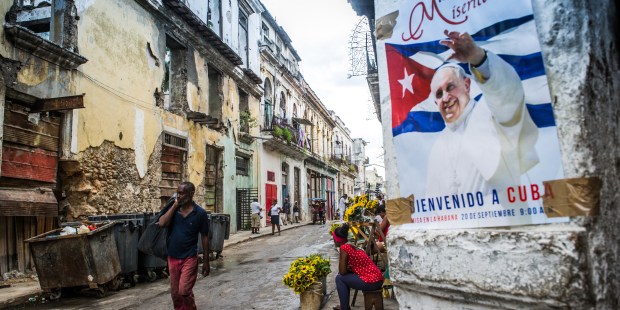 YAMIL LAGE / AFP
View of a poster of Pope Francis in Havana, on August 30, 2015. Pope Francis will visit Cuba from September 19 to 22, and he will offer mass in Havana, Holguin and Santiago de Cuba. AFP PHOTO/YAMIL LAGE
Share
Print
John Burger - published on 09/18/15

Immigration, freedom for Cubans, and the environment will be the most important themes of Pope Francis’ weeklong visit to Cuba and the United States, the Vatican’s top cardinal said Thursday.

Cardinal Pietro Parolin, Vatican secretary of state, who will accompany the Pope on the Sept. 19-27 trip, made his remarks in an interview with the Vatican television center.

Arriving in the United States from Cuba, Pope Francis “will enter as a migrant” as millions of people have done before him, he said, according to Catholic News Service. The United States is “a country with a long history of immigration and, at the same time, a long history of openness, welcome and integration of the various waves of immigrants who arrived,” the cardinal said. Francis, he said, hopes to be able to offer some points for consideration in the current U.S. debate on immigration reform.

As well, the Pope is likely to encourage greater freedom and respect for human rights in Cuba, the cardinal said. He said the Vatican would favor a lifting of the economic embargo the US has had in place against Cuba since the 1960s and that such sanctions “provokes poverty and suffering” among a country’s population. As the Cuban bishops hope, the Vatican feels that doing away with the embargo would provide greater contact with the United States and increased trade, which would “also would bring greater openness from the point of view of freedom and human rights.”

In addition, Francis, with a veritable world stage at the United Nations and the US Congress, is likely to relaunch the central messages of Laudato Si’, his 2015 encyclical on the environment, which “takes into consideration the human person within creation,” urging respect for “the transcendental nature of the person, from which flows his or her fundamental rights, especially the right to life and to religious freedom.”

Pope Francis, he said, will call people “to change our lifestyles so that we can be custodians of creation, as he says, and not dominators or aggressors.”

Another leading cardinal—the archbishop of Boston—also weighed in on the impending visit.

“Following the tradition of his predecessors, Pope Francis’ primary focus will be pastoral,” Cardinal Sean O’Malley wrote in The Boston Globe. “The Holy Father comes to pray with us and to share the Gospel message that calls us to the service of people who are in need; those lacking the most basic provisions of life, those who seek meaningful and productive employment, those who yearn for understanding, acceptance, and peace.”

It is not surprising that the Pope’s itinerary in Washington, New York, and Philadelphia includes visits to a soup kitchen, a prison, and a Catholic school in Harlem that seeks to lift children and families to the promise of a better future, the cardinal wrote.

“The Pope has spoken of the need for substantive economic change to provide meaningful inclusion for individuals and nations at the edge of the global economy,” Cardinal O’Malley wrote.