Winds of Change in Cuba: Religion is No Longer the “Opiate of the Masses” 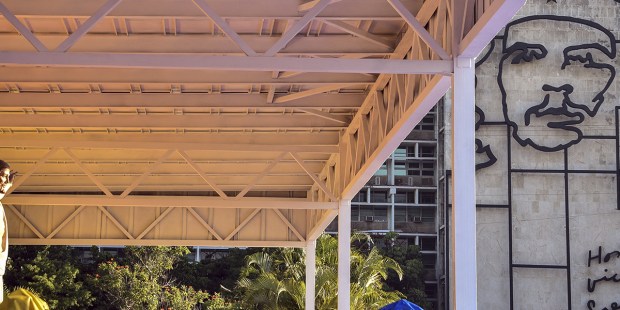 AFP PHOTO/ADALBERTO ROQUE
View of the altar where Pope Francis will celebrate a mass at Revolution Square in Havana, on September 18, 2015. The pope is visiting Cuba from September 19 to 22, the first stop on a trip that also will take him to the United States. In Cuba, he will visit Havana, the northeastern city of Holguin and Santiago de Cuba on the southeastern end of the island. AFP PHOTO/ADALBERTO ROQUE
Share
Print
Jaime Septién - published on 09/19/15

The Granma newspaper, which has been the official voice of the Cuban Communist Party for five decades, has thinned out, lightened up, and nearly etherealized its writing style these days when it discusses – just before Pope Francis’ visit to the Caribbean island – topics related to the Catholic Church.

In the past, prayer was criticized and dismissed; now, it is seen as a valid recourse for achieving peace and reconciliation for the Cuban people. Or at least, that is hinted at by some texts related to the coverage of Pope Francis’ visit, such as the article covering the recent prayer meeting for peace in Havana.

It’s possible to get along

“With a message of peace, unity and dialog for the best interests of humanity, the closing ceremony of the Prayer for Peace was held in San Francisco of Assisi Square in the historical center of Havana,” the report published in Granma begins.

This is the second encounter organized by the Sant’Egidio Community in Cuba. The community was born in Rome in 1968 in the light of the Second Vatican Council.  For this prayer meeting, it brought together many representatives of world religions present on the island of Cuba, under the general title of the world day of prayer: “Peace is always possible.”

Archbishop Giorgio Lingua, the Apostolic Nuncio in Cuba, read aloud Pope Francis’ message for this International Encounter for Peace, calling all to live together in harmony.

“It is possible and doable for people and communities that belong to different religions to live together fruitfully and peacefully. Peaceful co-existence between different religious communities is an invaluable good for the peace and harmonious development of a nation; it is a value that must be conserved and made to grow every day. Education in respect for specific differences and identities favors dialog and communication, for the good of all.”

Eusebio Leal, a Havana historian quoted by Granma, expressed the importance of this event, at a time when tens of thousands of refugees are fleeing to Europe, crossing its borders; “at a time when the world is deeply moved by those who die, suffer and weep.”

Leal invited all to pray for peace and to acknowledge and thank those who fight for this cause and dedicate their lives to it. He talked about how it is possible – when the necessary conditions are created – to live in an atmosphere of peace, understanding and respect for others.

As part of the ceremony, Lizette Vila, director of the Palomas project, read Proclaim for Peace, a document that advocates love, dialog, concord and compassion among individuals and communities.

Finally, the Call for Peace was signed.  Religious representatives of Cuba gave this document to members of the diplomatic corps present at the encounter.