How to Beat the Devil:  Advice from Rome’s Chief Exorcist 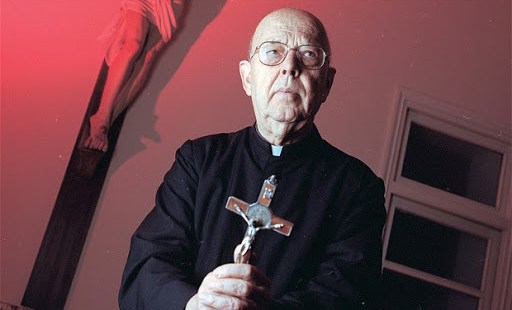 Father Amorth, famous Italian exorcist, tells us how to keep Satan far from us

Too many Christians do not believe in the devil, such as the Cardinal who alarmed Father Gabriele Amorth, the famous exorcist and expert on Mariology, by saying one day: “Nothing but superstition!” Others see the devil everywhere, paying him an unhealthy amount of attention. Father Amorth restores the proper perspective in this “spiritual testament” at the end of his life (he is 90 years old). The truth is that God is infinitely “more beautiful than the devil” and much more attractive, he says in this book-length interview compiled by his colleague Angelo De Simone. It is too bad that so many Catholics make the God of Love appear off-putting… which of course is playing the game of the devil.

We are children of God: that is the good news that all Christians should radiate. How can we evangelize without radiating God’s Love? How can we pass on such a fire if we are merely “religious” (everyone, even the most hardened atheist, is in one way or another!) and not nestled against Jesus’ heart?

Under the protection of Mary

Certainly, the devil exists and “possesses” some people, although a limited number. Father Amorth has spent much of his life delivering them. He is also well positioned to flush out “the fingerprints and devastating works of the devil” in our society. Yet this “expert” on Lucifer is careful not to make it an obsession, and gives the following advice about the inevitable temptations and falls that mark the life of a Christian: “If there is one sure way to remove us from the devil’s influence, it is by letting ourselves be attracted by the goodness and beauty that emanate from the good and from our God and Father.” He himself has taken the royal road by following Mary’s example and putting himself under her protection.

There is nothing irenic about this disciple of Padre Pio: he in no way minimizes evil, sin, or Hell. However, like the “little” Therese, he knows that we will be judged on love. Yet, since the fall of Adam and Eve, “the deeper reason that prevents communion with God is, again and again, the fear of God; fear that keeps us from feeling loved as a child.” This is the angel of darkness’s deadly lie, “God does not love you.” This is “the worst of evils” and the source of all the others: “Not having known the Father.” Without the Father’s Love, “the law is just a heavy burden.”

Complete trust in the Father’s Love

Throughout his life, to the top of Golgotha, Christ shows us how to resist Satan and to overcome evil: by relying totally on the Father, abandoning ourselves to his love. This does not happen without our participation, without being watchful, every day and all throughout our life, in order to “transform our state of servant into the rewarding identity of a son.” On this route, the devil does his bit: “… his presence and action in the world keep us alert so that we prepare for battle.” The Son wants to associate us with his successful struggle against Satan and his works so as to be winners with him in the hands of the Father.

The Christian is called to take up this fight as another Christ, not by giving blow for blow to the evildoers, but in peaceful witness to the truth: “Our struggle is not directed against creatures of flesh and blood but against evil spirits that inhabit this dark world.” Let us not pick on people who “have not had the chance to know the Father” but let us rather obey Christ and follow the instructions that Paul gave to the Christians of Rome: let us overcome evil with good because “revenge begets revenge, it does not break the chain of evil: it perpetuates and worsens it.”

Ultimately, the most formidable diabolical trap, is the half-heartedness, indifference, and spiritual numbness that gradually plunges us into darkness. How can we avoid it and the cohort of satanic temptations? The remedies have been known for two thousand years: “… humility, faith, prayer (the Rosary), frequenting the Sacraments (Mass, the sacrament of reconciliation), living a Christian life in conformity with the Gospel, doing works of charity and forgiving our enemies.”  Again, following Mary’s example and putting ourselves under her protection.

From God Is More Beautiful Than the Devil, a Spiritual Testament (in Italian), Father Gabriele Amorth, San Paolo Edizioni.

Translated from the French edition of Aleteia by Liliane Stevenson.