Leaders to Members of Congress: “Be Good Boys and Girls for the Pope’s Visit” 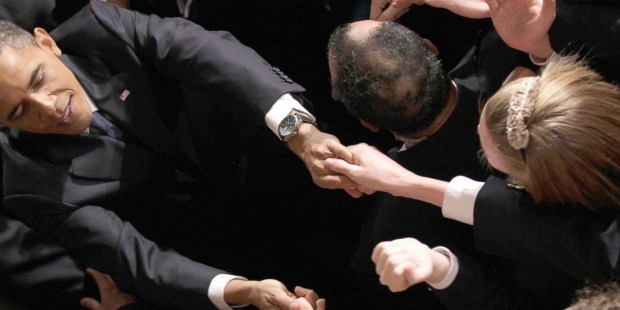 If you feeling left out because you couldn’t get a ticket to see Pope Francis when he makes his first visit to the United States this week, take heart. Even people in “higher places” are going to have a hard time getting near him.

Word has been getting out that those in power in Congress are planning to act a bit like parochial school sisters with rulers in their hands.

Political reporter David Hawkings says that leaders in the legislative branch don’t want to take a chance on seeing the historic first address of a Pope to a joint session of Congress turn into the kind of political circus that surrounds the annual State of the Union Address, with members vying for the aisle seats for a possible TV shot with the man of the hour.

“Too many members cannot be trusted to behave themselves when Pope Francis comes to the Capitol, the congressional leadership has decided,” Hawkings writes in CQ Roll Call. “And so, to enforce decorous discipline, some extraordinary measures are being readied.”

Leaders in both parties sent their membership in both chambers a request last week: “Out of respect for the pope’s schedule and the expectation of a timely address, we respectfully request that you assist us by refraining from handshakes and conversations along and down the center aisle.”

But they’re not taking any chances and will be taking additional measures to assure a smooth visit. To wit:

Leadership is looking for about 50 members known for their patience and institutional good manners. On the promise they’ll keep their hands to themselves, they’ll be assigned to wear dark colors (with hems below the knee for women) as papal protocol dictates, show up when the doors open and fill the three chairs on either side of the aisle in each of the chamber’s eight rows of fixed seating.

The aim is to create a physical zone of restraint between the pope and those who might invade his personal space…. Smartphone selfies, flash photography and cheering by the members are also being vigorously discouraged.

Aside from polite welcoming applause, silence will be expected from the Ladies and Gentlemen from the Fifty States and their guests. “This is not only to allow Francis to deliver his speech on a tight timeline (and in a language in which he’s not fluent) but also to prevent any of the applause-on-one-side, silence-on-the-other presidential address ritual if he opines in his halting English on topics that divide the parties,” Hawkings says. “While all the players know whatever he says will immediately get filtered through the lens of domestic policy standoff, they are working to create an atmosphere that transcends politics until the last possible moment.”

At least one seat will be freed up in the chamber, though. The Associate Press reported that Republican Congressman Paul Gosar of Arizona announced plans to boycott Francis’ speech because of reports that the Pontiff might focus on climate change.

“If the Pope wants to devote his life to fighting climate change, then he can do so in his personal time,” Gosar said, adding the Pontiff should use his visit to Congress to focus on religious freedom and the sanctity of life.