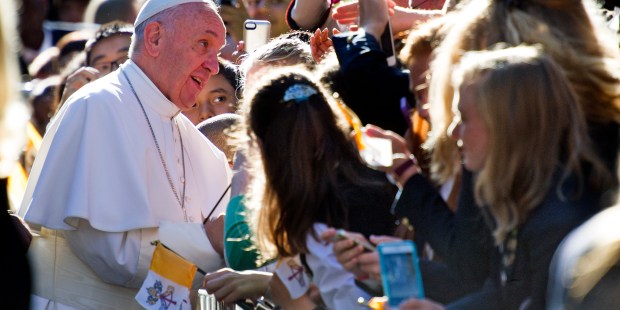 Pope Francis chose an excellent time of year for his first visit to the United States. The first morning of his U.S. visit showed off the spectacular early fall weather so often enjoyed by our nation’s capital, with sunny skies and temperatures that started out in the low 60s just after dawn and were expected to climb into the high 70s by late afternoon.

The picture perfect weather undoubtedly made the wait more pleasant for the thousands of people who crowded into various venues around the city in hopes of catching a glimpse of the pontiff.  Some of the luckiest were those chosen to line the motorcade route to the White House this morning, including children from 35 local Catholic middle and high schools who arrived wearing their best dress uniforms and chanted “Alleluia” as they waited for the pope.

Shortly before 9:00 AM, Francis’ car arrived at the children’s area.  It stopped, and the pope got out of the vehicle to greet the children.  For the next three minutes, he walked the length of the crowd, shaking hands and talking with dozens of students as their peers frantically snapped photos with their cell phones, many trying to take “selfies” with the pontiff in the background.  As he stopped to chat with one student after another, each one looked overjoyed and awed.  One lucky bespectacled teenage girl even became the envy of her classmates as she received a hug and a kiss on the cheek from the pope.

In a nation where teens pride themselves on being too cool to show excitement over anything, the kids wore their enthusiasm on their sleeves – or more accurately, their faces – as their joyful grins brightened up an already pleasant morning.  In contrast, Francis’ bodyguards looked tense and nervous as he navigated the crowd, trying to enclose him in an ever-tighter circle.  But Francis acted as if they did not exist, focusing totally on the kids. The pontiff managed to fit dozens of interactions into a matter of just a few minutes, yet each conversation somehow seemed meaningful, as if there was a real connection and give-and-take between Francis and each of the children with whom he spoke.

By 9:00 AM, the pope’s handlers were urging him back into the car, but as he approached the vehicle, he noticed a group of children he had missed and walked over to them.  Security once again seemed frustrated, but the children were delighted.  After blessing a young schoolboy, Francis finally allowed himself to be led back over to his waiting vehicle.  As he ducked inside the compact Fiat, several children could be heard shouting, “Papa!”

Meanwhile, the atmosphere at the White House was much more formal and less intimate, as a military color guard marched in with flags from the U.S., Vatican, individual U.S. states and the various branches of the service to the sounds of fanfares played by a full brass band.  Shortly after 9:00, President Obama and the First Lady made their entrance.  Michelle, who often makes headlines with her sartorial choices, wore a simple knee-length black dress with lace sleeves to the elbow and conservative black pumps.

A small titter went through the crowd as the first of Francis’ security vehicles, a large black Surburban, pulled up, followed by the Popemobile itself, a Fiat hatchback that looked laughably tiny in comparison. As Francis exited the modest car and greeted the First Couple, he also looked comparatively tiny, with both President and Mrs. Obama standing more than six feet tall (Michelle is 5’11” without heels).

After President Obama and the pope ascended to the stage and Michelle took her seat, the band played the National Anthem of the Holy See, followed by the U.S. National Anthem. The visual contrast between the two men was striking as they stood side-by-side. Obama held himself erect, his head tilted upward, looking proud, even arrogant.  Francis, known for his humility, looked the part beside the president.  Not only is he several inches shorter than Obama, he bent his head forward, his face downcast, looking as if was in prayer, or simply enduring his moment in the spotlight, as opposed to basking in it.

At the conclusion of the anthem, President Obama took the podium to speak. “What a beautiful day the Lord has made,” he said, gesturing toward the bright blue sky.  On behalf of “myself and Michelle,” he welcomed the Pope to White House, joking that “our backyard is not typically this crowded.”

“Today we mark many firsts,” said the president.  “You are the first pope from the Americas, this is your first visit to the U.S. You were the first pontiff to share an encyclical to a Twitter account.”  Obama told the pope he “value[s] the role the Catholic Church plays in … strengthening America.” He recalled his time spent working with Catholic volunteers in Chicago neighborhoods and said that as president, he has encountered Catholics helping people all around the world. Catholics, he said, feed the hungry, heal the sick, shelter the homeless, educate our children, and fortify “the faith that sustains so many.”

Obama said the excitement over Pope Francis’ U.S. visit is due not only to his role as pope but to his unique qualities as a person. He said the pontiff’s “humility” and “generosity of spirit” are a “living example of Jesus’ teachings” and that his moral authority comes not just from his words but from his deeds.

Obama’s remarks turned briefly political as he made thinly veiled references to the Syrian refugee crisis and the controversy over illegal immigration.  “The Lord’s powerful message of mercy,” the president said, demands we “welcom[e] the stranger with empathy and truly open heart.”

Obama thanked the pope for his role in warming relations between the U.S. and communist Cuba, where the pope visited immediately prior to his U.S. trip.  He also praised the pope’s outspokenness when it comes to climate change and the environment, and said he believes we have a “sacred obligation to protect our planet.”

The president also touched on religious liberty and the oppression of Christians overseas.  “Here in the U.S. we cherish religious liberty. … It was the basis of so much of what brought us together,” he said.  “But around the world, religious believers, even Christians, are imprisoned and killed for their faith.”  The president said we must protect the rights of Christians around the world to practice their faith.  He did not, however, mention the ongoing lawsuits in his own country accusing his administration of violating the religious freedom rights of Christians with Obamacare’s birth control mandate, nor did he mention the state official who was recently jailed for refusing to sign marriage certificates for same-sex couples.

Obama concluded by telling the pontiff that “Your holiness in words and deeds set an example” and thanking him for “shaking us out of our complacency.”  While he noted that “[a]ll of us may experience discomfort when we contemplate the difference between the way we live our lives and what we know to be true,” he said he believes that “such discomfort is a blessing,” inspiring us to take action. He said he hoped Americans would “heed your call” to “never stay ‘on the sidelines'” when it comes to making the world a better place.

In delivering his own remarks, Pope Francis, well known for going off-the-cuff during speeches in his native and more fluent languages, displayed the depth of his discomfort with English by sticking closely to the script, which he read word-for-word as written in a thick accent.  His remarks focused on climate change, discrimination and religious freedom, and raised his concern, shared by many Catholics, that “efforts to build a just and wisely ordered society respect their deepest concerns and their right to religious liberty.”

At the conclusion of both men’s speeches, a gospel choir took to the stage, singing an a cappella arrangement that took style cues from both Gregorian chant and traditional American gospel. Francis seemed delighted by the performance, breaking into a wide grin and applauding enthusiastically at the end.  After they were finished, he and President Obama descended from the podium and exited the garden to wild applause and cheers, then one last appearance on an upper veranda before retiring to the White House for a private talk.