Passing the “redemption point”: The Limits of Prophecy 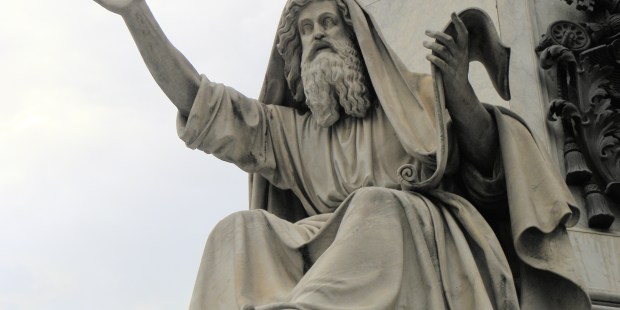 Ian Scott-CC
The prophet Jeremiahat the foot of the Colonna dell'Immacolata, at the end of the Piazza di spagna, Rome (1857).
Share
Print
Fr Robert McTeigue, SJ - published on 09/23/15

How powerful is the gift of prophecy? Last week, I wrote about the privileged pain and burden of the prophet’s vocation. After treating the issue of the power of prophecy now, we will look at the promise of prophecy next time.

To understand the power of prophecy, we might begin by asking, “How is prophecy like sunlight? I was told years ago that, “Sunlight is the best disinfectant.” So says one of my Jesuit friends who is a professor of biology. The Scriptures often speak of the word of God as a purifying fire (for example, a “refiner’s fire” in Malachi 3:2). The word spoken by the prophets shines as a burning light, an aspect of divine glory, which can burn away whatever is unclean or unworthy. (1 Samuel 6:20.)

Prophecy is also like sunlight in its power to transform. Sunlight hardens clay but melts wax. Stubborn sinners shrink from the prophet’s call to conversion, and harden their hearts against God and refuse His invitation to repentance (Psalm 95). For those open to the healing and liberating power of grace, the words of the prophet soften hearts, prompting sinners to yield to the call of God to repent.

The words of the prophet, like the light of the Sun, shine not only on individuals but upon communities and nations. In Rendall’s, “Jeremiah: Prophet of Crisis,” we see a summation of the power of prophecy in the choice between divine blessing for those who repent and accept mercy, as well as divine wrath for those who do not repent but rather reject mercy: “According to the principles of God’s dealings with nations outlined in Jeremiah 18:7–10, the bestowal of God’s mercy and grace was contingent upon the repentance of the doomed nation. Those who harden their hearts, therefore, toward God relate themselves automatically to His wrath and judgment; those who soften in their attitude toward Him relate themselves to His grace and mercy.”

Jeremiah 18 is worth reading in its terrifying entirety, but let’s just look at verses 7-10 here. Imagine Jeremiah thundering these words from the heights upon cities and nations, and ask yourself, “Would these words harden or melt my heart?”

The choice is clear—either repentance and blessing or disobedience and wrath. But it is not enough to present that simple “either/or” as an abstraction or a mere transaction. The words of God spoken through Jeremiah reveal the anguish of a brokenhearted poet and the inconceivable power of an all-holy and just judge. Consider these words from Jeremiah 18:15-17, and ask yourself again, “Would these words harden or melt my heart?”

Jeremiah pronounces God’s judgment upon the disobedient nation: “But my people have forgotten me, they burn offerings to a delusion; they have stumbled in their ways, in the ancient roads, and have gone into bypaths, not the highway, making their land a horror, a thing to be hissed at forever. All who pass by it are horrified and shake their heads. Like the wind from the east, I will scatter them before the enemy. I will show them my back, not my face, in the day of their calamity.”

How different from the casual chumminess that God is often spoken of these days! How different from glib talk of mercy and peace! Yes, of course, mercy and peace are on offer from God, but only to those who repent, who turn away from their sin with horror and gladness and turn to the truly merciful (and therefore just) and all-holy God. Heaven may come to Earth gently, as in the Incarnation, through the obedience of Mary (Luke 1:38) or we may pull the heavens crashing down upon our heads through our disobedience. But in no case will the truth of our hearts and minds remain unrevealed by God; in no case will the truth of our hearts and mind go unnoticed by God Who gave us freedom. The repentant will receive mercy; the unrepentant will not; and no one will remain the same once God’s final word upon us is pronounced.

When I was a young man I heard a priest say, “Jesus is God’s last, best offer.” If we reject the Christ of God, then God has nothing left with which to save us from ourselves. The great power of prophecy was seen in the conversion of the vast city of Nineveh (Jonah 3). Upon hearing Jonah’s call to repentance, the whole city, from the king to the beasts, were covered with sackcloth and ashes, fasted, and received divine mercy.

The joy of the prophet is to see conversion in response to the proclamation of the intentions of God. Their words of horror and hope are meant to draw the people back from the brink. Rendall notes: “Realists in outlook, the prophets sought to bring God’s people back to their senses and to their knees. They were indeed watchmen on the walls their duty; was to warn the people of the approach of judgment. In this they took no delight, but, instead, they deeply lamented the fact that God’s people had to be handed over to the enemy for punishment. Here are shown both the aim and the appeal of the prophets. These men revealed the patience and grace of Jehovah, and they remonstrated against the sin that was destroying their people. They denounced sin and described it in all its terror and terribleness for this purpose—that God’s people might awaken to their condition and avail themselves of the cure God was holding out to them.”

Let’s not forget, however, that while sunlight melts wax, it hardens clay. Prophecy has limits; God will not override human freedom, even if individuals, communities and nations choose to cling to their wicked ways—with all the consequences that must follow. Rendall speaks of communities passing the “redemption point,” that is, passing the point of no return. In Jeremiah 14:10-12, we read, “Do not pray for the welfare of this people”, and similarly in 7:16 and 11:14, God makes known to Jeremiah that his role as intercessor is coming to an end and his role as witness to divine righteousness and human wickedness has begun. That presents us with a difficult question. The people to whom Jeremiah preached passed, as has been said, the “redemption point.” Have we, in our time, reached a similar point?

Rendall’s reflections upon this question are sobering, yet not without hope: “They had resisted the light of Jeremiah’s message. They had hardened their hearts against the Lord. Now the Lord announces that nothing can avert the Babylonian invader. Judgment must come. Have we reached that point in our own civilization? We cannot tell. No one has been divinely instructed to cease intercession. While we most certainly live in an age closely resembling Jeremiah’s time, we must continue to pray that God will intervene and save His people.”

God loves His people, and wills the best for them, which is Himself. God offers us a share in His eternal life and joy, in His perfect goodness. He invites us to accept the privilege of returning His love. Our love for God can be genuine only if we are truly free, that is, truly free to accept or reject God’s offer of love. Sin darkens our mind and weakens our wills, and stirs up appetites to love what is unworthy of our high calling. The victory of prophecy is a triumph of love—hearts melted and enflamed by the love of God. The failure of prophecy is a failure to love by those who have rejected the words of the prophet, which are in fact the words of God. Sin—large and small—in human hearts and in the character of nations, is a choice to offer our highest love and ultimately our worship to what is not God.

The choice to love wrongly cannot be without consequence. David Goldman, in his gripping, “How Civilizations Die (and Why Islam Is Dying Too)” brings to mind the observation of Saint Augustine, who himself watched Roman civilization crumble: “States fail, Augustine argued, because peoples fail, and peoples fail because they love the wrong things. A nation defines itself by what it loves, and the wrong sort of love condemns it to eventual ruin.”

Surely, we must admit that our time is awash in “the wrong sort of love.” Even as I say that, I am reminded of the admonition I would give seminarians when speaking to them of the mission they would soon take on as preachers and confessors (the same admonition that I myself received): “Always leave people with hope.”

I confess that is not always easy for me. One of my dearest and wisest friends jokes about what happens when I join what he describes as my “Irish apocalyptic imagination” with his own self-described, “German gothic gloom.” It is tempting to just lie down and wait for what seems to be the inevitable darkness to fall.

I will fight against that temptation now by ending with the exhortation with which Rendall closed his book: “In the midst of this crisis, Jeremiah was called to preach the word of the Lord. We, too, live in a century of crisis… Jeremiah exposed the sin of his people in all its seriousness; he faced his hearers with the fact that their own schemes of salvation were doomed to failure; he also predicted the coming of divine judgment… What is our responsibility in a century of crisis? As did Jeremiah, we must trust the Eternal, stress the essential, and proclaim the evangel.”

In daily duties and in times of greater moment, we are called upon to bear witness to the inevitable justice and astounding mercy of God. We must proclaim the righteousness of God and the call to conversion to all, starting by looking into the mirror. And we must continue to pray with urgency, trusting that the time of prophecy and intercession is not yet at an end.

So far, we have spoken of the pain and power of prophecy. When I write next, I will speak of the promise of prophecy. Until then, let’s keep each other in prayer.

Father Robert McTeigue, S.J. is a member of the Maryland Province of the Society of Jesus.  A professor of philosophy and theology, he has long experience in spiritual direction, retreat ministry, and religious formation. He teaches philosophy at Ave Maria University in Ave Maria, FL, and is known for his classes in both Rhetoric and in Medical Ethics.