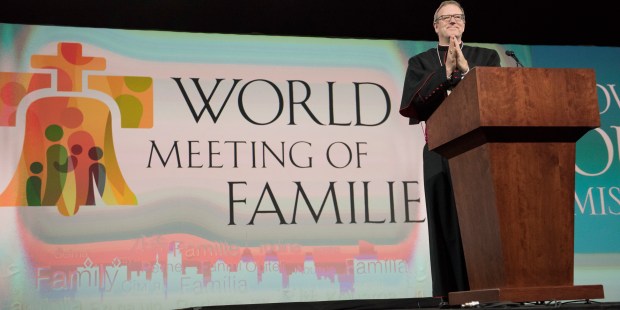 The 2015 gathering in Philadelphia is the largest in the history of the World Meeting of Families.

Every three years since 1994, families from all over the world are invited by the Holy Father to attend this global gathering. At the 2012 meeting in Milan, Pope Benedict XVI announced that the 2015 gathering would be held in Philadelphia, USA. The theme of this year’s meeting is Love is Our Mission: The Family Fully Alive.

With delegations from across the globe — from Pennsylvania to Perth to Pakistan — more than 100 countries have come together to celebrate the family as the sanctuary of love and life. The 2015 gathering in Philadelphia is the largest in the history of the World Meeting of Families.

Several high-ranking Vatican officials are taking part in the family congress, including German Cardinal Gerhard Müller, Prefect of the Congregation for the Doctrine of the Faith [pictured directly above]; Guinean Cardinal Robert Sarah, Prefect of the Congregation for Divine Worship; Italian Archbishop Vincenzo Paglia, President of the Pontifical Council for the Family [pictured below, right]; and French Bishop Jean Marie Laffitte, Secretary of the Pontifical Council for the Family and Professor at the Pontifical John Paul II Institute for Studies on Marriage and Family in Rome.

In his opening remarks, Archbishop Charles Chaput of Philadelphia said the purpose of the international family gathering is to re-energize all people and help them strive to forge deeper bonds in their own family life. Religious leaders, internationally renowned speakers, and experts on family life will deliver talks over the course of the week.

“Welcome to the World Meeting of Families 2015 and welcome to the Philadelphia, the city of brother love and sisterly affection,” Archbishop Chaput told participants at the opening. “We welcome all people of all religions, and all people of good will, to join us this week … God remakes the world through the people and families who love him,” he said.

Remarks by Archbishop Vincenzo Paglia, President of the Pontifical Council for the Family

Archbishop Vincenzo Paglia told participants his opening remarks: “The family is our passion and it is also our mission. From the moment God created the world, the family has been his passion as well.”

“The family makes the world a home for all people, especially the weakest among us,” the head of the Pontifical Council for the Family said. “The Church, the preeminent expert in humanity, knows that if the family is strong, society is strong.”

Civil leaders were also on hand at the official kick-off of the World Meeting of Families. Philadelphia Mayor Michael Nutter presented the Pope’s representatives with a number of unique Philadelphia-fashioned gifts for Pope Francis, including a custom made breezer bicycle, which he called “a people’s bike for a people’s pope.”

The one of a kind bike designed for Pope Francis was inspired in part by the Pope’s new encyclical Laudato si’, and his call to cut down on carbon emissions by using more environmentally friendly forms of transportation. The papal bicycle features a clean papal white frame; the pontiff’s name written in his native Spanish; several symbols including a cross and candle, the colors of the Swiss Guard, and the Liberty Bell to remind him of Philadelphia. It’s custom made metal chain guard, fitted to protect the white papal cassock on rides through the Vatican gardens, was fashioned in the shape of an angel’s wing.

The official opening concluded with a ribbon cutting ceremony with Church and civil authorities and representatives of Philadelphia. With the cut of the red ribbon, the World Meeting of Families Congress is now underway in the city of brotherly love.