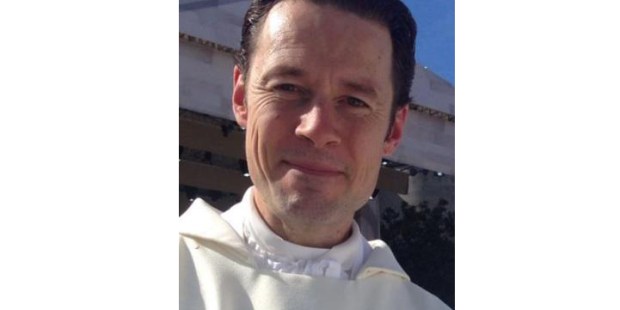 “I saw myself as the pope’s priest,” says Rev. Albert Scharbach

After a full day of events and meetings on Wednesday, Pope Francis made his way to the Basilica of the National Shrine of the Immaculate Conception for the canonization Mass of Junipero Serra, which he celebrated with 275 bishops, almost 1,000 priests, 200 deacons and over 27,000 lay faithful and religious.

One of the priests in attendance was Rev. Albert Scharbach, an Ordinariate priest in the Archdiocese of Baltimore who is married with eight children. He was ordained in 2013 and now serves as pastor of Mount Calvary Church in the heart of the city.

The Ordinariate was established by Pope Benedict XVI in 2009 to enable groups of Anglicans to enter the Catholic Church while retaining aspects of their patrimony that can in turn be shared with the broader Catholic world.

It was Scharbach’s first time in the presence of the Holy Father and he spoke to Aleteia’s Zoe Romanowsky about it.

Fr. Scharbach, you concelebrated the Mass with the Holy Father; what was the highlight for you?

Simply being there. In a profound way, I saw myself as the pope’s priest — connected to the Holy Father. As an Anglican priest, when I would go to the hospital and someone would say, ‘Are you a Catholic priest?’ and I had to say ‘no,’ it became painfully apparent that something was lacking there. When, by conscience, I had to become Catholic, I had to lay down my priesthood not knowing if I’d ever be able to pick it up again; I didn’t know if I’d ever be able to make that visceral desire a reality again. After 5 years of being laicized, it was gratifying beyond words to be able to say Mass with my local bishop after I was ordained a Catholic priest, knowing he is connected to the Holy Father. But now to say Mass with the pope himself, really confirms that reality for me — that I am his priest, connected to the center of the Church, to that authority in an organic way.

A lot of Francis’ homily this evening, given in Spanish, was focused on the missionary call of the Church — to go out into the messiness, into the world as it is today, to not allow ourselves to grow apathetic or self-enclosed. How does this inspire you as a priest?

That’s what the priesthood is about, laying down our lives. I remember lying prostate, lying crucifix before the altar, and when we do that, we give our lives wholly to God, knowing it will mean the cross, giving our lives. The pope’s message also emphasized the fruit that comes from that commitment: healing and hope, especially for those who need it most.

You came into the Church under Pope Benedict XVI , who established the Ordinariate, and you were ordained under Pope Francis. What do each of these pontiffs mean to you in terms of your own priesthood?

Benedict was a doctrinal pope, coming from the CDF (Congregation for the Doctrine of the Faith), and that was so meaningful to me in becoming Catholic. It was the end of a big progress for me, embracing the full teaching of the Church, and Benedict represented that so well. And now as a priest, my role is to live out that teaching, in sacrificial love, and Pope Francis represents that so well. So as priest, in communion with him, I can’t help but be influenced by his charisms, but each of these popes has had a prudential influence on me.

What is Francis’s central charism, do you think?

Well, he’s doctrinal, too — and Benedict certainly illustrated missional love — these are broad emphases I’m giving here. Francis’ charism is missionary discipleship. Those are his own words. And we might say a “sincere life of evangelization.” It’s so easy to say these words— people have been talking about these things for many years. But under Francis’ influence it’s become more than words. Through his influence, people are thinking about what this really means. What does it mean to live out our missionary mandate? We need to be honest about confronting that call and truly embracing it.

Why do you think this Pope resonates so much with non-Catholics and unbelievers?

He makes an effort to meet them where they are. Sometimes people disagree with how he does this, but his heart is to meet them where they are, their place of appreciation and understanding. Not just to leave them there, of course — the point is to lead them further—but the completion might be for someone else. But to get their attention, to listen, to seek first to understand.

What do you hope Francis’ visit will do for the Church in the United States?

Invigorate the Church to be who She already is. I entered the Church for what She is, most fundamentally, not for what She is in this place at this time. People say to me all the time, “Why? Why did you become Catholic?” They see that many people don’t seem to believe, that they’re going through the motions. That’s how the Church looks to a lot of people. Sometimes you have to look hard to find people who are passionately living out the Gospel. But I didn’t become Catholic for that, and the Church is more than that, by virtue of Word and Sacrament. So I hope his visit helps the Church to be more fully who She is already is, from the beginning and for eternity.

Where does the Ordinariate fit into all this?

Part of the charism of the Ordinariate is to invigorate people with beauty and truth. A lot of Catholic churches have lost a passion for this. Many Protestants who come from churches that are not beautiful are drawn to the Ordinariate. And, of course, people from Episcopal churches are passionate about that — they find truth there, plus the beauty many of them are used to. The Ordinariate parishes provide what some crave— it fills a void for them. In this way the Ordinariate helps the Catholic Church to be more fully who She is, to embrace the fullness of the tradition that has always been there.