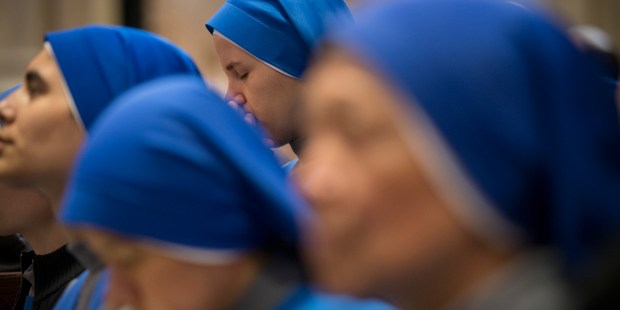 Pope’s homily was “simple, clear and full of encouragement.”

When Pope Francis walked into St. Patrick’s Cathedral this evening, he found an adoring crowd of nuns, priests, seminarians, and ordinary lay Catholics lucky enough to score a ticket to Vespers. Many waited for five hours or more inside the cathedral.

His homily was worth the wait.

Though his words were geared towards the religious — priests, nuns and brothers — they hit home with everyone in the audience. He talked about the importance of a “spirit of gratitude” — because joy and love of God attract people.

Matthew Hill, a 20-year old at the Seminary of the Immaculate Conception in Douglaston, New York, could relate.

“His words spoke to my heart,” said Hill. “When he spoke about counting our blessings, I know that I personally neglect to do this often. I know there are so many people less fortunate than me. The Pope’s words helped me to think about how I can change that.”

When Hill was in high school in Rockville Centre, Long Island, one of the things that drew him to thinking about the priesthood was the example of joyful priests.

“I used to go to holy hours. I would sit there and see priests and seminarians who were so overbearingly happy. Some were only a few years older than me. They just radiated happiness,” he said.

Pope Francis also spoke about the “spirit of hard work” — and how a grateful heart is impelled to work hard to serve God.

“Personally, we seminarians go to a soup kitchen once a week,” said Hill. “We serve those who can’t help themselves in New York City. Doing this makes you one hundred percent more grateful for what you have. You feel like you are fulfilling the Gospel. I would say that the more you love what you do, the more you draw people in.”

Fr. Charles-Benoit Riche, a French priest with the Franciscan Friars of the Renewal, came to New York for a week to be with his brother priests. He is currently stationed in Limerick, Ireland.

“What touched me the most was the Pope’s simplicity. Even his homily was simple, clear and full of encouragement,” said Father Riche.

In terms of the Pope’s message about gratitude and hard work, Father Riche believes they go hand-in-hand.

“Without gratitude, giving of yourself becomes much harder,” he said.

Father Riche works with those recovering from alcoholism in Limerick.

“I work with people who have lost the meaning of life. I help them to rediscover that they are loved. We see them come back to life. They see beauty, which is freely earned. It blows their mind. Then they share this gratitude towards life with others. It is amazing to see this. It is almost like a fire that they share with their friends,” said Father Riche.

The issue of gratitude struck a chord with Soledad Hershey, a mother of four children from New York.

“When the Pope spoke about counting your blessings, I thought about my husband who tells me to do this every day, especially when I complain.”

Hershey was also touched by the Pope’s words regarding his appreciation of nuns.

“When the Pope thanked all the nuns and told them that he loved them, tears came to my eyes. There are many women who complain that they are not important in the Church. Because this Pope is so sensitive to the details of the marginalized, he touches all the points that are most sensitive.”