Miracle at JFK: Man with Cerebral Palsy Embraced by Pope 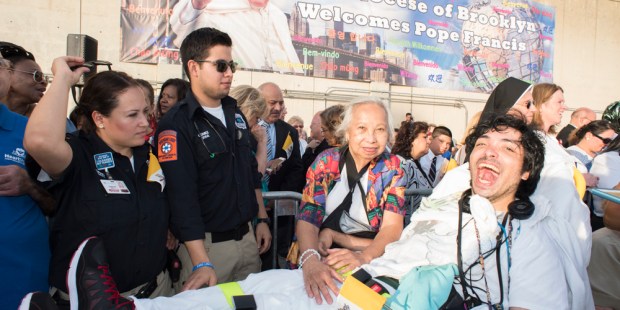 In a city of movers and shakers, God outdoes them all—at least that is how Iluminada Gubatan describes the meeting at JFK airport between her son and Pope Francis.

It almost did not happen.

At 12:30 p.m. Thursday, Iluminada listened to a phone message from Msgr. Jamie Gigantiello, a long-time friend.  In the voicemail, he asked if her son, Gerard Gubatan, 27, could be at John F. Kennedy International Airport when Pope Francis arrived that afternoon from Washington, D.C.

“I have an ambulette to take you and Gerard to the airport, call me,”said the message.

By 2:15, the mother and son were on their way to JFK to join 200 fellow New Yorkers—high school students, homeless, and Catholic faithful—to greet Pope Francis.

On arrival, the Pontiff exchanged an embrace with Archbishop Timothy Cardinal Dolan of New York, Bishop Nicholas DiMarzio of Brooklyn and other members of the clergy.

But Pope Francis made a beeline for Gerard.  His mother described the Pope’s laser-like focus in finding those whom society tends to ignore.

“He knows whom to go to first,” she said.  “I guess he saw in the crowd the lowest of them all—the most helpless. In his eyes, he saw my son as the most helpless—on his stretcher.”

She said the Pope approached with his eyes on Gerard.

“He came very close to Gerard’s face, and they were whispering to one another,” she said. “When he came to me I was frozen because it was like God before me.”

Her first impulse was to grab the Pope’s hand and say “Thank you,Lord, for coming.”

“Then I kissed his ring. The next person he went to was an autistic girl. The autistic girl was a little bit behind a lady, but he extended his hand to this autistic girl and she came out.  After that, he went to a disabled boy sitting on the fence.  He bent down to the boy. The lowly he has his eyes on.”

Afterwards, Iluminada marveled at how the meeting materialized in only two hours.  In that short time, she needed to get permission to leave work early, beat the traffic, and find a way of getting her son into a waiting ambulance. The accompanying medical crew from Maimonides Hospital—Douglas Jablon, Miguel Gomez, Doralba David, and Tara DiDonato—fit Gerard in by hoisting him onto a stretcher.

“When you move, O Lord, you move mountains,” she exclaimed.

Plus, there was one more thing about the unexpected day at the airport. It was her birthday.

“This is the best birthday gift ever,” she said.

George Goss is a media assistant for the Dominican Friars.