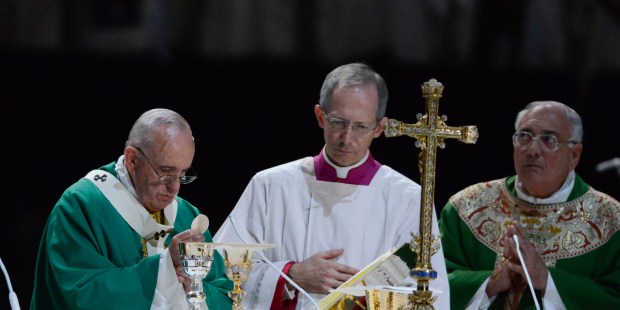 Although Pope Francis has been portrayed as a divisive figure, there was no sign of that in Madison Square Garden Friday night. The universal Church in all its variety and diversity gathers around its spiritual leader. He is encompassed on all sides by a ring of more than 20,000 people crowding into the bowl-shaped auditorium of Madison Square Garden in New York City.

Hanging incongruously beneath the cabled underbelly of the stadium roof is a wooden crucifix with a carved three-dimensional figure of Jesus in his agony. Below, miniature in comparison, stand more than 40 bishops together with Francis, our joyful, humble and unpredictable Pope. Laurie Hanrahan of New Windsor, N.Y. realizes as she sits in the stands that Madison Square Garden, where she holds Rangers season tickets, has become “a sacred place.”

At the end of a long day, Pope Francis stumbles over his English, recalling the example of Pope St. John Paul II in his last, declining days, reminding us that Popes struggle, too. Despite his exhaustion, he speaks words of light, joy, and hope without fear. He tells us about the life of the Lord in the midst of the city, Jesus who walks our streets in the guise of the outcast and abandoned, and a father who waits for his children to come home.

Lay readers pray that God will pour blessings down on our Church and our nation, presenting their petitions in English, Spanish, Gaelic, Italian, Mandarin, and French. And the stadium trembles to the sound of thousands chanting in the Latin language that the Church has called her own for millennia.

Earlier in the day, lucky ticket-holders waited in lines twenty city blocks long for the chance to enter the arena. One of the lucky ones is Patricia Martin White, a Spanish citizen with a green card. She is an immigrant like the many whom Pope Francis urges our government and our Church to welcome with compassion. White sometimes feels “isolated” as a Catholic in the United States. This Mass tonight reminds her that “the Church is humongous and very powerful.”

Mass attendee Manuel Albino, a 41 year old divorced father of Puerto Rican heritage, is one of the thousands of Hispanics who comprise approximately 38% of adult Catholics in the United States. But he also belongs to a tiny minority of U.S. Catholics who prefer the traditional Latin Mass. Albino admires Pope Francis’ “pan-Hispanic consciousness” as well as his “genuine pastoral solicitude” towards traditionalists, “a segment of his flock that he doesn’t quite ‘get.’” He is happy that Francis “cared enough to make this stop” on his voyage to “recharge our spiritual batteries.”

Linda George, who like Albino is also divorced, is one of the lucky out-of-state residents to get tickets. George calls her ability to get a ticket “miraculous.” A few Sundays ago, “I was praying about seeing the Pope during Mass,” she said. Shortly afterwards, George received a phone call from her younger sister, who lives in New Rochelle, N.Y.. George’s sister and her husband had won three tickets through their parish lottery, and they were calling to offer George their extra ticket. “You prayed, didn’t you?” George’s sister laughingly accused her.

George wants to be a voice for divorced people who still remain faithful to their sacramental vows. Although her seemingly devout Catholic husband left her eight years ago when their seventh child was only six months old, “I’m still married and I’m going to stay married for life,” George maintained. Stories like hers are what Pope Francis needs to hear, she said.

Pope Francis’ presence here also means a lot to young people in the Church. Laurie Hanrahan’s 13 year old son Daniel emailed and talked to practically every priest he knew in an effort to get tickets for the Mass. This Mass is “something he’ll never forget.” Hanrahan was unable to bring her 18 year old son Shane, who suffers from severe autism and would likely feel overwhelmed by the crowd. “I wish he could be in the Father’s presence,” she said, but “hopefully the blessing will come home with us.”

Twenty year old college student Emily Sheboy calls this Mass a “once in a lifetime opportunity for me and everyone in attendance.” She says that many of her friends, Catholic and non-Catholic, are attracted to Pope Francis’ zeal, humility, and joy. He “radiates the love of Christ with great passion, so that even those who may not believe see some force at work within him,” she said.

Or, in the simpler words of a Madison Square Garden employee named Derek, “He loves everyone.”