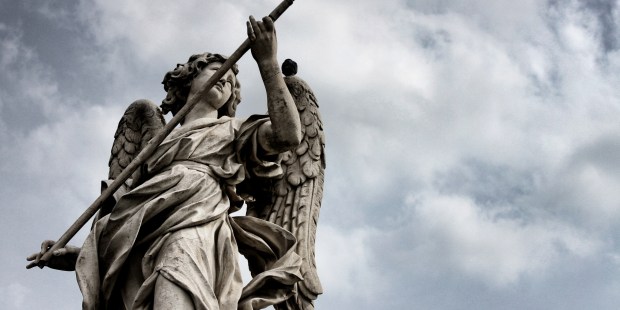 Consider how intimately the great Archangels accompany us on earth

At morning prayer, the psalms seem suited to the archangels. Psalm 29 for Michael, the power of God: “The Lord’s voice resounding on the waters, the God of Glory thunders; the Lord on the immensity of waters…” And for Gabriel, Psalm 25, a quiet prayer of hope and trust. For Raphael, a psalm that I love, 147: “The Lord builds up Jerusalem, and brings back Israel’s exiles. And heals the broken-hearted; and binds up all their wounds.”
Michael – who is as God; Gabriel – God’s messenger; Raphael – God’s healing. They say what angels always say, “Do not fear.”
– Kathleen Norris, The Cloister Walk

My younger son has a particular devotion to the Archangel Michael, and took his name at his confirmation. Even when he was very small he would “talk” to Michael, and on the rare nights when he would awaken from a bad dream, we would whisper together about the powerful angel of God, the mighty warrior who puts down all that is evil and scary — dragons and prideful beings and such — and my son would be able to drift back into sleep having been consoled by the knowledge that such a warrior was on the job.

Once, when he was about eleven-years-old, my son ushered at a wedding and was gifted for his trouble with an Icon of the Archangel Michael. Bride and groom were both amused, nay, stunned, to watch him beam and clutch the treasure to his chest in heartfelt gratitude. That night, he fell asleep, still clutching Michael to his breast. “I’ve never seen a kid react to something religious like that,” the groom said. But my son and Michael go back a long way. There is history, there; it’s personal and private history, but it does a parent’s heart good, particularly when a son is grown into a man, to know that an angel plays a real and important role in the life of a family member.

An angel was standing near the altar in the temple; in his hand was a golden censer, and a large amount of incense was given to him. From the angel’s hand the smoke of the incense went up before God…
– Revelation, Chapter 8

When my elder son left for college, I slipped into his packs an Icon of Gabriel, God’s messenger. He put it up in his room, but wondered about it. Why Gabriel? I wondered about it, too, until I remembered that Gabriel is the messenger. My firstborn was going away, and I’m sure on some level, I was afraid I would never hear from him again. I think I hoped Gabriel would help keep the communication lines open.

True biblical belief in angels can be no hindrance in our journey to God; it can only be a help. Belief in angels makes us more aware of God’s providential love, of God’s greatness and glory. Never does an angel intrude between God and us. Angels are completely devoted to God, completely amenable to the divine holy will. They never act on their own, never transgress the limits of their instructions from on high. All their activity is found in the performance of divine commands. When they speak, their words ask faith in God and obedience to God. And when we are moved thank angels, they say, Worship God! So spoke the archangel Raphael to Tobias, when thehe latter sought to thank him for his kind assistance, for the archangel said: Praise God, adn give Him thanks in the presence of all the living.
– From the sermon, Angels: Spirits Magnificent and Mighty by Abbot Athanasius Recheis

Who are better examples of obedience and trust than the angels?

For my own reasons, I have a particular fondness for Raphael, his Icon is near my desk, and his appearance in the Book of Tobit has been very instructive to me on many personal levels.

In Chapter 12 of that book, Raphael reveals much about angels:

Raphael called the two men aside privately and said to them: “Thank God! Give him the praise and the glory. Before all the living, acknowledge the many good things he has done for you, by blessing and extolling his name in song. Before all men, honor and proclaim God’s deeds, and do not be slack in praising him.

I am Raphael, one of the seven angels who enter and serve before the Glory of the Lord.”
Stricken with fear, the two men fell to the ground.

But Raphael said to them: “No need to fear; you are safe. Thank God now and forever.

As for me, when I came to you it was not out of any favor on my part, but because it was God’s will. So continue to thank him every day; praise him with song.

Even though you watched me eat and drink, I did not really do so; what you were seeing was a vision.
So now get up from the ground and praise God. Behold, I am about to ascend to him who sent me; write down all these things that have happened to you.”

When Raphael ascended they rose to their feet and could no longer see him. They kept thanking God

Do good. Praise God. Thank God. Be not afraid. The constant advice of the angels, in every age.

“May prayer strengthen us for the spiritual battle we are told about in the Letter to the Ephesians: “Draw strength from the Lord and from His mighty power” (Ephesians 6:10). The Book of Revelation refers to this same battle, recalling before our eyes the image of St. Michael the Archangel (Revelation 12:7). Pope Leo XIII certainly had a very vivid recollection of this scene when, at the end of the last century, he introduced a special prayer for St. Michael throughout the Church. Although this prayer is no longer recited at the end of Mass, I ask everyone not to forget it and to recite it to obtain help in the battle against forces of darkness and against the spirit of this world.” Pope John Paul II (St. Peter’s Square, Sunday, April 24 1994)

St. Michael the Archangel, defend us in battle; be our safeguard against the wickedness and snares of the devil. May God rebuke him, we humbly pray, and do thou, O Prince of the Heavenly Host, by the power of God, cast into hell Satan and all the other evil spirits who prowl through the world, seeking the ruin of souls.

Happy Feastday of the Holy Archangels.