The Prayer We Never Quite Mean Until We Do 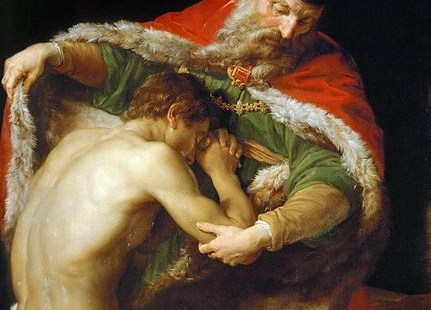 We are oriented toward God, but enthralled to our own consolations

“But I, miserable young man, supremely miserable even in the very outset of my youth, had entreated chastity of You, and said, Grant me chastity and continency, but not yet. For I was afraid lest You should hear me soon, and soon deliver me from the disease of concupiscence, which I desired to have satisfied rather than extinguished.”
– Confessions, XIII, Chapter 7, 17

Most of us understand this famously-shared prayer of Augustine’s, a prayer uttered from a place of spiritual imperfection and immaturity that was, nevertheless, God-oriented. We understand it because we have been-there-done-that or perhaps are even still-there-doing-that.

We also intuit that being stricken with the “disease of concupiscence” does not make one evil, or despised by God; it simply means that we must search for healing. But our search is often more tentative than we like to admit; it only really gets serious once we give up trying to conquer the germ ourselves, and accept that only the application of grace will do. Grace, imparted upon us by Almighty God at his own pleasure, and usually only after we have surrendered unto him something we have been withholding, out of fear.

It is fear that makes us cling to concupiscence, because we are consoled by its manifest sins — by lust, by gluttony, by outsized rage. Our consolation lies in the familiarity of our indulgence, which has often become a refuge for us, giving distance to what we would rather not face within ourselves. Our fear is that if we give fully over to God what he asks of us, which is our very hearts and minds and our will, we will be left bereft — without the solace of that action by which we have sought both self-protection and identification, sometimes for our whole lives.

I know something about that. It was only after making a recent general confession — a confession lasting three hours — that I was delivered from my own “disease of concupiscence”. When I finally, in that confession, surrendered what had been eating at me for decades and invited God to come fill up the deep void I had been futilely trying to top-off on my own, I became free. I was delivered of the need to seek consolation in food. Having lost some weight since then, almost effortlessly and with no sense of food having a hold over me, I know that a gift of grace is working within me, and I am humbled and grateful beyond expression.

The thing is, my own spiritual immaturity and imperfection, like Augustine’s, had delayed the deliverance. I would pray, “Oh. Lord, help me,” but not with the fullness of my heart, not with the certainty (and thus the belief) that the abundant favors of the Lord would so completely and perfectly answer the need that had for so long driven my appetites.

It took an utter and undeniable depletion of my own resources before I could reach that point of surrender, a point where I had no choice but to acknowledge that physically, mentally and spiritually, I was spent, and could go no further. I let it all go; I consented to a free-fall — “Thy will be done…really!” — and landed right into the arms of the One Who Saves.

I’m sharing this because yesterday Aleteia published a piece I wrote about tv-newsman Mo Rocca, whose participation as Lector at a papal Mass in New York had caused outrage in some Catholic quarters, largely because — as an openly gay man and supporter of same-sex marriage — Rocca’s enthrallment to his “disease of concupiscence” was all too assumable. As was mine for many years, when I waddled up to the ambo to pronounce the Word of the Lord — a sinner, stuck in the young prayer of Augustine, seeking wholeness, but not yet trusting, not yet able to surrender every bit of herself to Christ Jesus, yet — like Rocca — God-oriented enough to want to share scripture in community.

Many people have responded to the piece, some miserably and with malice and adolescent disdain, others with deep thoughtfulness. One person wondered whether Rocca truly understands what he thinks he believes, and while I am not a theologian, I thought, “perhaps not, but ‘I believe, help my unbelief…’ underpins so much in the life of faith”, and Peter was not pushed away, rejected by Christ until he came to speed.

Some people were concerned that I had overlooked or given short shrift to Aquinas’ teachings on sin’s effect on the soul; a majority of my correspondents worried that I did not sufficiently comprehend the price of scandal, and what it costs the church when a public sinner is seen proclaiming so great a mystery as this:

For a child is born to us,
a son is given us;
upon his shoulder, dominion rests…

The wonder that is the Incarnation can never be pondered enough, but one truth about incarnation is that it is a process. The prophecy of Isaiah read by Rocca announced a process begun before time, one we know was brought to completion by the fiat of a virgin, the trust of a carpenter, and the availability of an unglamorous cave. A process takes time, sometimes an awful lot of time, sometimes through meandering paths. Our baptisms begin a process, too, and it’s a process of a kind of incarnation, one where Christ becomes alive in us, if we are free enough to let him. It took Augustine many years; it takes most of us many years before our disease of concupiscence is healed, and the paths are made straight within our wildernesses.

We give scandal, quite unwittingly. And then we see it, and we say, “Lord, fix this angry/anxious/lonely heart of mine…but not yet.” Not yet, because there is perverse comfort there, and we do not yet trust that a fuller consolation will replace it.

I accept the legitimate fears of people who worry, not so much that a non-celibate gay man has lectored at a mass, but because of what message others might take from his participation — that doctrine is at risk to fall; that powerful people within the church would like to help it tumble. The concern has credence but only to a point, and then the questions must be asked, “where is our faith? If we err, do we better err on the side of humility and inclusion or prideful expulsion? Do we not believe that the Holy Spirit has a handle on this seeming whirlwind? Are we so conceited that we believe the church will fall, in direct opposition to Christ’s own promise, unless we hold it erect of a moment?”

I have read Aquinas and I do understand his teachings on sin and salvation and sanctity. But I also understand that he himself counted his own masterful expositions as “straw” compared to the higher truth that was revealed to him — so immense that he stopped writing, rather than try to express it.

We are a church of mystery, and miracles, and wonder — where wondering is permitted because, as Gregory of Nyssa said, it “leads to knowing.” We know that reason feeds faith, and faith feeds reason, but we do not always know how to simply run on faith, trusting that all things serve God’s own good purposes.

Today, in Aleteia, we are publishing a very interesting interview with Guinean Cardinal Robert Sarah, in which he is asked about the Prodigal Son, “…why can’t the father go out and live with the son where he is?”

Replies the Cardinal, “Because the house is here; not somewhere out there. The son has to return home. If he returns home, he has left his independence, his sin. In the Gospel, the son returns home, saying: ‘I am your son, I am not worthy, but take me as a servant.’ This is repentance. If there’s no repentance, there’s no mercy.”

And yet I can’t help noticing that the son’s arrival home requires a journey — a home-oriented one, for certain — but a journey, nevertheless. And a journey is a process, sometimes a long one, unrecognizable for what it is, just like the process of the Word becoming Incarnate.

Some might hear in Aleteia’s question a kind of rebuke to Pope Francis’ exhortation for the church to “meet people where they are.” It is not, and the Cardinal makes clear what is abundantly true about mercy: it requires expressed repentance.

And yet, there is this line in the story, too: While he was still a long way off, his father caught sight of him, and was filled with compassion. He ran to his son, embraced him and kissed him.

Because the father rushed out to greet him, just imagine how much easier it must have been for the son — whose journey had demonstrated his right-orientation — to finally utter those difficult-but-blessed words of salvation, “Father, I have sinned…”

Who could wish to get in the way of that meeting?