For Men Only: A Call to Battle 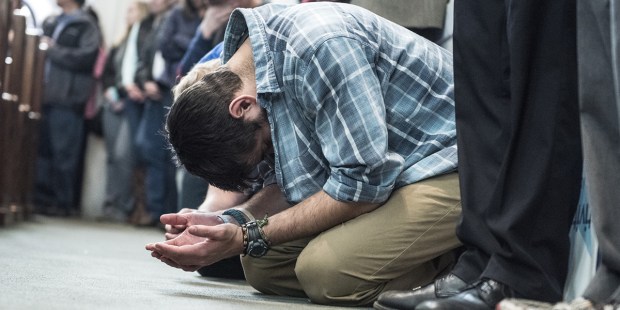 Bishop Olmsted issues “Into the Breech,” an apostolic exhortation for men in the midst of a world of confusion

But a bishop in Arizona is calling men to join a different kind of battle—to fight for their souls and the soul of Christian culture.

Bishop Thomas J. Olmsted of Phoenix penned a letter to the men of his diocese, and issued it Sept. 29, the feast of the Archangel Michael, known for doing battle. The letter’s message, though, will resonate with Catholic men anywhere. Into the Breach: An Apostolic Exhortation to Catholic Men, My Spiritual Sons in the Diocese of Phoenix takes a look at the special role men have to play in the New Evangelization.

Aleteia spoke with Bishop Olmsted Wednesday about the letter and plans to get the message out.

Why did you feel this letter to Catholic men had to be written?

I think there is a crisis that we see happening. If you look at the statistics about young people’s involvement in sacraments, in marriage and all, if you look at the statistics about the number of fatherless homes, the growing problem of pornography in society, the decreasing numbers of marriages each year, those are signs that there’s a lack of courage and readiness to make commitments to relationships, to make a gift of self to others, that many of our men have. So it seemed to me to be important to point out the crisis and to call our men to deepen their faith and to rely on God to give them the grace to fulfill their mission in the world and in the Church.

What overarching message do you hope men will come away with?

I would hope that they would want to really begin to live their faith. I tried to be very practical about that. I think it’s important that they see that there is a spiritual battle, and if there is, then we need to be aligned with the one who gives us strength to win the battle. So we need to be praying every day, we need to be deepening conversions. So that means we need to be examining our consciences every evening and make an Act of Contrition.

The big crisis that we see is a lack of going to Mass on Sunday and keeping the Sabbath day holy. Men should be taking the leadership in that.

I think there’s also a need to build up fraternity with other men who themselves are wishing to grow in their own faith and the practice of the faith in their role in society.

You focus a lot on the need to do battle, to prepare for battle. But doesn’t it seem like the messages we’re getting from the Church today, from Pope Francis on down, are more of a pacifistic nature? “Be merciful,” for example. How do you reconcile the two calls?

I don’t see them as in conflict at all. The spiritual battle is not the same as a physical battle. The battle is within. The battle is with the evil one tempting us—to possessiveness, to go with the passions of the flesh. And I think Pope Francis sees that very much. He frequently refers to the devil. He so often reminds us of the need to avoid temptation. From the very first day after he was elected, he spoke about the fact that the only way we succeed is through the mystery of the cross. This is the kind of battle that I’m talking about, and I see Pope Francis calling us to do that.

It seems to me that in order to be merciful you have to first yourself have conquered your selfishness and overcome focusing on your own needs and be able to look beyond that to see the needs of others and have compassion for others.

That’s why I want to focus on the spiritual battle, one’s own personal conversion and the grace of Christ to go beyond ourselves to see the needs of others.

Men are so busy, and this is not a short letter. How will this message get to them?

That’s why it’s important that we encourage our men to make friendships with other men. If they belong to a Catholic men’s fellowship they can read parts of it at a time, discuss it together. Those who don’t read a lot can meet other men who do. We always feel we don’t have enough time. How we use our time is always a measure of where our commitments are. And in order to engage in a spiritual battle—or any battle—you have to set priorities in your life. That’s what I hope men will do—set priorities. [The letter] is a little longer than some men may wish to do. On the other hand, I hope it follows somewhat logically, and they can take passages they feel somewhat more drawn to read and that may lead them to want to read other parts.

Are you asking your priests to bring this up in homilies?

When we had a convocation of our priests a week and a half ago, I told them that I would be coming out with this letter and asked them to be close collaborators with me in bringing this message to our men themselves, helping our men to know about it  and to appreciate its importance and begin to process it and put it into their lives.

What forums are there in the diocese where men can get together and discuss this and other writings and grow in their faith?

It’s nearly 10 years now that we’ve had Catholic men’s conference. Those have been really wonderful occasions for us, and as a result of that we have a number of men’s groups that have started in parishes and continue, some meeting monthly, some biweekly. We also have men’s conferences in the Spanish language or bilingually. We just had one last weekend for Catholic Charismatic men in Spanish, and 1000 men gathered for that at one of our arenas here in a university. Coming up in another couple of weeks we have another one in Spanish—Hombres de Cristo, Hombres de Fe—Men in Christ, Men of Faith.

We also are grateful that we have very active Knights of Columbus councils in nearly all of our parishes, great leadership at the state level and at the local level. They have already been helpful in activating men in their faith and their service.

Do you feel that Pope Francis, during his visit here, had a special message for men?

He met with us bishops twice—once in Washington, DC, at the Cathedral of St. Matthew and once at the Seminary of St. Charles Borromeo  in Philadelphia—and he was certainly urging us to be close to our priests, to engage our priests, support them, and to challenge them as well.

He urged two things in particular that we do, going back to the reason the Apostles chose the first seven deacons, which was so that the Apostles, the first bishops, would have time for prayer and for teaching. Those would be exactly what we need in order to engage in a spiritual battle. In order to find the fire of the Holy Spirit alive in our hearts and the Word of God alive in our hearts we have to be praying—praying ourselves, to deepen our relationship with Christ, praying with others, and teaching.

So especially those of us who are bishops and priests and deacons, I think he gave us some very helpful challenges for our leadership of all those who are ordained men.

What impressed you most about his visit?

There were several things. One is his constant thought of those who are forgotten, who are poor, who are overlooked or who are vulnerable. That’s exactly the kind of thing that men should feel drawn to. His example of going out to others and taking notice of them, I found that to be a really inspiring thing.

Secondly, I was very pleased that he spoke in Spanish. A high percentage of our young people are Hispanic, and a growing population of our Catholics are Hispanic, and I think that hearing the Pope speak in the Spanish language was an encouragement in that regard. But he was also very much embracing of all cultures and all sectors of the Church.

At the meeting with bishops in Philadelphia, he compared the family to the way we used to have these little mom and pop stores, and now we have shopping malls. He said that we used to have an intimacy of family that culture kind of supported, but now it’s become large and impersonalized in many ways. He pointed out why we need to be men of prayer—so we have a centering in Christ in our own lives, and to help our men to move in that same direction.

The Synod on the Family is about to begin in Rome. What do you predict will be the greatest long-lasting effect of this undertaking?

I don’t have any predictions of what will come out of it. I am certainly praying for it and am very interested in it. I think the fact that we’ve had a consistent focus on marriage and family for two years now, the whole Church getting engaged in this by having a “pre-synod” and the World Meeting of Families, and the synod coming up. And the position of the Holy Father to already simplify the ways the annulment process can be handled, all of that has helped us to be praying about, thinking about, focusing on the real great importance of marriage and the family in the Church today. And because it’s gone over this long length of time, it’s led all of us locally in parishes and families, the whole Church, to focus on a really huge issue, and that is really a great grace for us, and that will continue to bear fruit.