I Took a Selfie With Pope Francis 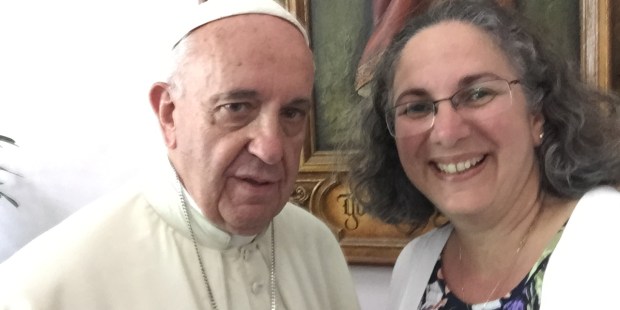 The author meets the Holy Father on her pilgrimage back to Cuba, the land of her birth

I took a selfie with the Pope. It really happened.

My mother was mortified. That made it even better.

I didn’t set out to get a selfie although we had been teasing Mom about it for some time. It just happened and I went with it, and he was game, and before we knew it we both chuckled and moved on.

Just like the phone’s flash, it was over in a microsecond. But it’s a moment I’ll never forget, and not because of the selfie. I think we can all agree that it was a breach of protocol, even disrespectful, to take this opportunity and turn it into a spectacle of modern all-about-me opportunism. You don’t have to say it – I said it for you, and it’s true. Mea culpa.

But that was only one moment. I want to share with you what happened before I extended my hand and launched a team of journalists into photography overdrive. You see, to take a selfie with Pope Francis means I had to be close enough to him to do it.

I was in Cuba with family, celebrating the Pope’s visit and having a reunion 50 years overdue. Part of this pilgrimage and journey home included a few important events with Pope Francis. I attended the Papal Mass in Holguin, sitting up front in the V.I.P. section, and later, a private audience arranged at the home of my uncle, the Bishop of Holguin.

The morning had been long. I sat with tens of thousands of faithful (and maybe…not so faithful) Catholics, all of us shouting joyfully, barely able to contain our excitement at being present at this historical Mass.

Cuban and Vatican flags waved continuously as the Pope arrived in the popemobile. Shouts of “God bless you, Francis!” drowned out the music. He smiled and waved back and kissed babies and loved us all. And we loved him back.

Then Mass began, and I slipped into the celebration as I do every Sunday. In spite of the festive air and the rock star reception, the Mass was reverent and deeply moving. Later, I reflected that this happened all around me – we were there to see the Pope, but it was because of Christ that we gathered. This Eucharistic celebration, in particular, was cause for thanksgiving…to be able to share in this moment with my aunts and uncles and other loved ones all in the same place, in the land of my birth.

While I can say that elements of the Mass were stunningly beautiful, such as the music, there were moments of profound prayer and reflection where I could have been back in my own little parish participating in the miracle of the Eucharist. Whether pope or parish priest celebrating, the sacrifice of the Mass brings Christ to us. And we must love those men who through personal sacrifice, study, and prayer, and the Sacrament of Holy Orders with all that entails, bring Christ to us.

In the moments before speaking to Pope Francis I had that realization – that he is a man, very much like my two uncles…one an engineer, the other a bishop. Men who know the meaning of family. Men who get up in the morning and go to work. Men who have known joy and grief. Men who live and laugh and love. Men like my own father.

To see Pope Francis standing next to my uncle and graciously receiving each member of my family as we were introduced didn’t embolden me so much as put me at ease. We exchanged some private words, and then I asked him, as humbly as I could, “Holy Father, would you take a selfie with me to share with my children?” He assented with a smile and that was the moment that lasted forever and will remain with me. He indulged my request as a father does, because a daughter asked. Maybe selfies annoy him. Maybe he thinks they are silly. Maybe he thinks they’re great. It doesn’t matter; his demeanor and expression said, “Yes, let’s do this thing you would like to do.”

In his gentle expression, I caught a glimpse of Our Father’s lavish love for us. That’s the snapshot I like to share.