The Pope Said He Loved Nuns at St. Patrick’s. And the Feeling Was Mutual. 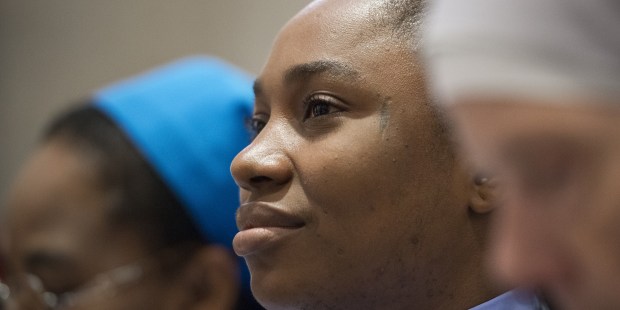 Not too long after Pope Francis was elected, I said to the Lord, “You know, it would be so nice to see him some day!” Then I shrugged off the thought, never imagining it would happen. But happen it did! On Thursday, September 24th I was blessed to accompany three of our nuns from Corpus Christi Monastery in the Bronx to St. Patrick’s Cathedral, NYC, to pray Vespers with Pope Francis. I was stunned by the news that I was chosen to go and represent our community. Before I headed out to the Bronx a few days early, I remarked to my sisters that I expected my seat to be at the back of the cathedral and behind a column but it wouldn’t matter to me, for I would be in the Holy Father’s presence.

The morning had been a full one. Due to a radio interview with The Catholic Channel, I was traveling solo to St. Patrick’s, winding my way through the streets of Midtown Manhattan, much as I did two decades ago when I worked in the city. I had regained my New York stride, although this time, in my black veil, white habit, and black cape, I invited many stares and smiles and shouts. “Yo, Sistah! Going to see Pope Francis? Tell him I said hello!” After going through the security checkpoint and waiting for about a half hour in line, I was inside the cathedral, marveling at how the renovations have transformed the interior to a sparkling brightness. I held my ticket out to the white-gloved usher, who glanced at it and told me, “Oh, you’ll be in the special seats.” I made my way to Pew 52, and then hesitated. This had to be mistake! I was only a few feet away from the center aisle, in the midpoint of cathedral! I asked the two Carmelite Nuns (from Beacon, NY) seated there to look at my ticket and confirm I was in the right place. They did and appeared as shocked as I was by our good fortune. Sr. Mary of the Sacred Heart, prioress of the Bronx monastery, soon appeared to share our excitement.

I lost all sense of time waiting in the cathedral for Pope Francis to arrive. The air was electric with anticipation as we greeted our seatmates, nodded at our fellow religious sisters, smiled at the priests, took photos, and gazed around at our surroundings. We prayed the Luminous Mysteries of the Rosary as his arrival neared. I will never forget how everyone stood and watched the footage of the Popemobile’s slow progress down Fifth Avenue. What a thrill to hear the cheers of the crowds cascading from outside the cathedral’s open doors! Then, behold, preceded by blinding camera lights, the Successor of St. Peter was in our midst, slowly walking up the center aisle, sweetly smiling, his right arm extended in blessing, now and then pausing to grasp a hand! I did take a very blurry photo of him as he passed us, and one of him (even more blurry) blessing us.

Vespers was so moving, the singing by the St. Patrick’s Cathedral Choir was heavenly, and all of us (especially the religious) were easily able to sing the psalms. Now and then, I would look up at the Holy Father in the sanctuary, reassuring myself that this was not a dream, that he was really in our midst and praying with us. Pope Francis’ homily was in Spanish but we could read his words on the screens mounted on the columns. My sisters saw me on television, jumping up to applaud the pope when he spoke of the strength of religious sisters, and then, assured us, very touchingly, that he loved us very much! I don’t think I was the only teary-eyed sister who held her hand to her heart when he uttered those words!

At the conclusion of Vespers, Cardinal Dolan’s hearty welcome, “You are now a New Yorker!” got both the Pope Francis and the normally reserved Msgr. Guido Marini grinning from ear to ear.

My eyes filled with tears as the Holy Father bowed to the altar and made his way out of the sanctuary. Would this be my last sight of him? After several minutes, the pope reappeared and greeted those seated on the front sides of the Cathedral. And, then, yes, he headed back down the center aisle!

I had prayed that I would get a second chance to greet Pope Francis when he left St. Patrick’s and my wish was granted. Sr. Mary of the Sacred Heart had moved up closer to the edge of the pew and beckoned me to follow. I did and, as he passed, I shouted out, “Papa Francesco!” He smiled and as he passed by, I lightly grabbed his left wrist (covered by his starched cuff) with my left hand (as if I were trying to take his pulse), trying to convey in that simple gesture our deep love and prayers for him. A simple yet bold gesture. Immediately afterwards, I remembered how, before the Holy Father’s arrival, Msgr. Robert Ritchie, the rector of the cathedral, had instructed us not to the do the very thing I had done! Oh no! Indeed, I did feel a certain kinship with the woman with the hemorrhage who reached out to touch the tassel of Jesus’ cloak though, in my case, it was the pope’s cuff!

When interviewed on the plane trip back to Rome, Pope Francis had expressed surprise over the warmth of his welcome to the U.S. According to the Associated Press, the pope invented a word in Italian to describe the exuberant warmth of his welcome from New Yorkers: “stralimitata,” roughly translated as “beyond all limits.” So, I hereby proclaim myself guilty of “stralimitata,” but feel confident that His Holiness will forgive me my affectionate transgression. Viva il Papa!

Sister Judith Miryam Boneski is a Dominican nun writing from the Monastery of Our Lady of the Rosary, Summit, NJ.