When a Seminary Becomes Another Kind of School 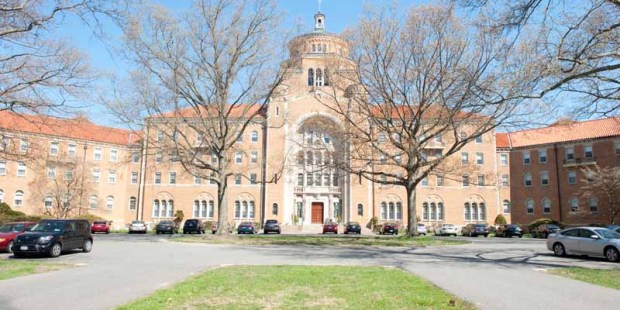 When the seminarians of Long Island’s Seminary of the Immaculate Conception were transferred to St. Joseph’s Seminary in Yonkers as a part of a unique tri-diocesan merger of formation resources many wondered whether Immaculate Conception could be sufficiently utilized to justify its upkeep. The questions arose: What possible use could be made of a seminary housing no seminarians? Would the sprawling Lloyd Harbor property – which crests Long Island Sound along the valuable North Shore – be sold, and another piece of local Catholic history, like the recently sold and demolished Inisfada, lost to development?

Enter Monsignor Richard Henning who, only a month after the merger, was named Rector of the seminary. Henning took a long look at what was sorely needed in the Diocese of Rockville Centre, with its 1.7 million Catholics, and found creative and inventive ways for Immaculate Conception to serve both clergy and laity. The Seminary has become a source for continuing education for ordained priests, and a house of formation for permanent deacons. Additionally, Henning instituted the Domus Porta Fidei, a residential center within the 200 bed seminary, wherein a small group of single Catholics – male and female, ages 22-35, either employed or attending school full-time – can live in community while focusing on personal spiritual development. For some residents, that includes discerning a vocation to the priesthood or the religious life; for others, the experience is a means toward building a more fully integrated and disciplined lay Catholic identity, where habits of prayer and meditation can become foundations for evangelization.

The seminary also plays host to parish days of retreat, community and youth group evenings of worship, and faith-focused gatherings, but perhaps it’s most ambitious innovation — and potentially the most powerfully transformative to the diocese — has been Henning’s move to establish a private retreat program focused on Adoration of the Blessed Sacrament, and run by priests from a new association from across the Atlantic, the Missionaries of the Most Holy Eucharist, of the Diocese of Frèjus-Toulon, France

“We were operating more as a conference center than a retreat center, with the laity coming in groups, with their own retreat directors.” Henning said. “But a lot of retreat houses have closed, and we were looking for a way to offer individual retreats, and to have folks on the campus that could offer spiritual direction. Through circumstances, I met Father Sean Davidson, one of our missionaries. As we talked about the mission of his community, we realized we could form a good partnership.”

“We have been here now for a little less than a year, giving Eucharistic retreats and for me it has been a very powerful experience,” said Father Davidson, originally from London, England. “Our main work has been to provide silent guided Eucharistic retreats. We offer daily spiritual direction, and provide the retreatants with specific biblical texts to mediate upon before the Eucharistic Face of Jesus. This simple little formula has proven to be an almost infallible way of bringing souls to deep peace and to a new experience of Christ’s presence and love in the Blessed Sacrament.”

The retreats have quickly booked-up as Long Islanders hungry for a chance to “withdraw to a quiet place” and rest, pray, and recollect themselves, find their way to Immaculate Conception. “We did no real publicity,” Davidson added, “but from the first week, the Lord has been drawing souls to Himself. By word of mouth, the news about our retreats spread very quickly. We now have people coming, not only from the region, but from all over the U.S. and even some from abroad.”

“I attended a one-day retreat, several months ago,” one retreatant told Aleteia. “The arrival of the missionary priests has sent a very positive shock-wave of hope into the community. Their devotion to the Eucharist would be quite enough to bring a flood of graces to our Diocese, but they are also formidable preachers and the most reverent priests and deacons I have ever witnessed.”

The Missionaries of the Most Holy Eucharist were founded in 2007 for the promotion of Eucharistic Adoration in the Church, and they are particularly happy to be ministering on the grounds of the seminary, which they say are conducive to a successful retreat experience. “We all know [Christ] loves us, theoretically, but life changes forever when we really experience that truth in the depths of our souls. In order to be able to do this, people need to give Him time and silence. We are here to facilitate that life-changing process. The beauty of the seminary and its surroundings provides us with the ideal location for this work.”

Father David Nugent, from Armagh, Northern Ireland, and a “revert” to Catholicism, credits his mother’s prayers at Eucharistic Adoration for both his return to the faith and his eventual ordination. He perceives a deep need for Catholics to reconnect with the Real Presence. “Our mission here is centered on the fact that Jesus really lives in the Most Holy Eucharist, and that His life among us is very real and very beautiful,” Father Nugent explained. “During the retreats we help people discover, by using the Gospels, that Jesus is truly close to us, living among us, and communicating Himself to us.”

It appears the message takes. Said another retreatant of her five-day experience of silence and Adoration, “What I found at the seminary retreat was what I needed most: quiet time, a reverent daily Mass, a way to reconnect with my faith, and — for the sake of my family — resettle my spirit. I got all that and more. I thought silent Adoration would be difficult, but the effect of sitting so intimately at the feet of the Lord surprised me. I was never bored, but instead felt more and more invited to just remain there, loving Christ, feeling his love in return. I went home with a sense of something new, feeling changed and actually healed through the spiritual encouragement of the priests, and the simple act of Adoration. And that feeling has held, even all these months later.”

Msgr. Henning spent nearly a year arranging the retreat mission between Bishops of Toulon and Rockville Centre, and he is pleased with the results so far. “The Missionaries bring a kind of contemplative presence to the diocese, and that has not existed on Long Island”

“I have been deeply touched by the work that we have been doing here,” said Father Nugent. “The people that I have met on retreat have been some of the very best people I think I could ever meet. It has been such a privilege to listen to people’s experience of Jesus and to help confirm them in His love. I have been so thankful to the Lord for all of this, and I am so happy doing this beautiful mission. It is my joy.”