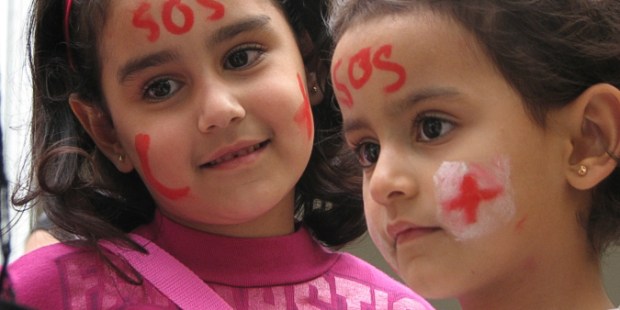 Failing to find peace, the Syrian capital does its best to allow its residents to carry on with their daily lives

Another ten kilometers to go before reaching Damascus. The city can already be seen from the top of the hill we are on. The visibility is perfect and we can observe almost the whole city: you can easily distinguish in its heart, a huge column of white smoke. This is the Russian embassy which has been targeted by a Daech missile, certainly the consequence of its recent commitment to the side of the Syrian Arab Army. The heavy and massive smoke cloud indicates that the explosion must have been particularly powerful. Damascus receives a handful of missiles like this per day. It is nothing compared to what fell on the city a year ago, around the same time: “We received shells every five minutes, life was impossible!” says an inhabitant. Now the capital is still threatened: there are three combat areas in the northern suburbs, east and south, respectively occupied by the Jabhat al Nosra (the Victory Front) and Jaysh al-Islam (the Army of Islam). In the past ten months the front line has stabilized, but just a week ago the two terrorist factions coordinated an offensive, albeit unsuccessful.

We continue our journey to the rhythm of checkpoints which become more frequent as we enter the city. Once in the heart of Damascus, the military become ubiquitous.  Damascus’ defense is organized in concentric circles, like a target. You have to cross multiple circular areas to reach the center of the city where the government neighborhoods and affluent residential areas are located. Ignoring roads, gardens and buildings, blocks of reinforced concrete were set up. ​​These makeshift ramparts helped put an end to attacks by suicide vehicles that frequently raged in 2011, when the conflict began. Although they seem precarious at first, it is these provisions that allowed the Syrian capital to withstand attacks by Islamic terrorists. It is also thanks to them that life goes on in the capital. Far from being overwhelmed, residents carry on with their routines: mothers pick up their children after school, traffic is dense and the Syrians continue to go to the shopping areas, restaurants … almost as if nothing had happened.

Indeed, nothing on the face of the Damascus women so much as hinted at the state of war they endure. Yet some key places in the capital remind its residents that it is indeed plunged into a merciless conflict. The first of these is the Syrian National Hospital, the country’s largest, completely free and reserved for Syrian civilians from around the country. Each room is occupied but the many doctors do not seem to be overwhelmed. Patients are carefully looked after and receive very good care: the equipment is new and the facilities are as well maintained as in Western hospitals. Only the patients’ ills differ: here, everyone is a victim of the extreme violence of the Islamic State. Accompanied by the director of the hospital and several doctors, we visited some rooms. In one of them, we see a little boy: below his waist, the flatness of the sheets leaves no room for doubt: he has lost his legs.

By his side, his father forces him to make the V for victory sign, but his sad face reveals the trauma he has experienced: less than a month ago, while he was playing in his home town of Raqqa, a truck filled with gasoline and loaded with explosives exploded near him. In the adjoining room, a shopkeeper and his coworker are bedridden. Both were taken in after being surprised by a firebomb in neighborhoods near the northern suburbs of Douma, where the Jaysh Al Islam terrorists operate. The two men suffer from third degree burns, “Once healed, I will go back to work in my store,” says one of them. It is indeed possible that his business will soon be reestablished. This is how the capital survives: repairing each facade, rebuilding each building demolished by bombs. The day after this visit, the hotel that houses some journalists was also hit by a rocket, leaving a crater of a little over a meter in the front wall. The next day the same hole was already filled in, the impact had been erased. After four years of war, it has become almost automatic, like a reflex: to erase all traces of conflict in order to better provide the inhabitants of Damascus with some fragile appearances of peace.