Pope Francis: “Anesthetized Conscience is Victory for Evil One” 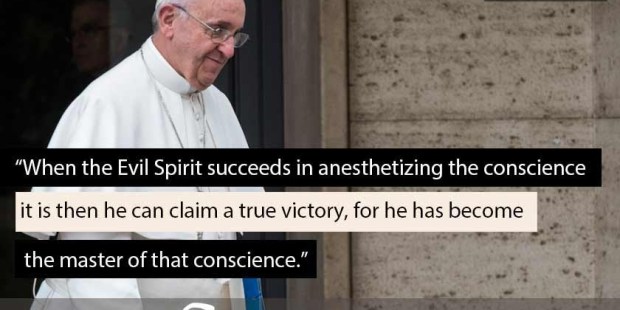 Urges Christians to practice discernment and warns against relativism

At morning Mass in the Casa Santa Marta in the Vatican, Pope Francis reflected on a gospel reading in which Jesus speaks forcefully on the influence of Beelzebul, the “prince of demons” (Luke 11:15-26), and urged diligent care and discernment for Christians in the face of eternal conflict: “temptations always return,” said the Pontiff, because “the Evil Spirit never tires.”

In the gospel reading, Jesus delivers a man from the clutches of a demon, and among the crowd some see his good action as a sign that he, himself is a servant of evil. “Every kingdom divided against itself will be laid waste, and house will fall against house,” Jesus tells them, before warning about the necessity of diligent awareness of the evil all around.

Said Pope Francis, of the scene, “[some] did not appreciate him and sought to interpret Jesus’ words and actions in a different way, against Jesus. Some, for envy, others for doctrinal rigidity, others because they were afraid that the Romans would come and massacre them; for many reasons they sought to distance Jesus’ authority from the people, even with slander as in this case.”

Emphasizing Jesus’ words on discernment, the pope spoke plainly, noting that pride and a sense of superiority is often the means by which we give access to pernicious spiritual influences: “The Evil One is hidden; he comes with his very educated friends, knocks at the door, asks for permission, comes in, and lives with that person. Drop by drop, he gives him instructions” leading us to “do things with relativism”.

The pope said once such access is given, such relativism is embraced, the loss of a sense of sin is a great surrender to evil: “Anesthetize the conscience. This is a great evil. When the Evil Spirit succeeds in anesthetizing the conscience, it is then he can claim a true victory, for he has become the master of that conscience.”

Like Jesus, the Holy Father counsels, “Watchfulness. The Church counsels us to always make an examination of conscience: what happened today in my heart because of this?”

“Discernment”, he concluded, “From where do these comments, words, teachings come? Who says this? Let us ask the Lord for this grace: the grace of discernment and of watchfulness.”