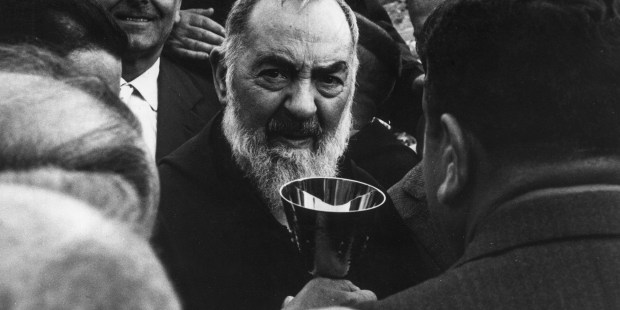 Stories meant not to scare you but to increase your trust in God. Because no demon can separate a soul that lives united to Jesus.

Saint Pio of Pietrelcina, better known by the name of Padre Pio was an Italian Capuchin priest. He was born in the late XIXth century (1887) and died in 1968. He was canonized by the Roman Catholic Church in 2002. At the age of 15, a vision made him understand his mission: he would have to fight the Evil Spirit.

According to Father Gabriele Amorth, the famous exorcist of Rome, “the great and constant struggle in the life of the saint was against the enemies of God and souls, those demons who sought to capture his soul.”

From his youth, Padre Pio enjoyed heavenly visions, but also suffered from the attacks of the devil. Father Amorth said: “The devil appeared to him under many different forms: as a big black cat, wild and threatening, or as a repulsive animal, in the clear intention to frighten him; under the appearance of naked and provocative young girls who danced obscene dances, obviously to test the chastity of the young priest. However, the worst was when the Devil took on the appearance of his spiritual director, or posed as Jesus, the Virgin Mary or St. Francis.”

This last tactic, when the devil appeared to him as someone good and holy, was particularly problematic. Here is how St. Padre Pio discerned whether or not the visions were false: when the Virgin Mary and the Lord appeared, he felt a certain shyness, followed by a sense of peace when the vision ended. However, when the devil appeared disguised in a sacred form, he felt a sense of joy and attraction, but when this form was gone, he was left sad and remorseful.

Satan also sought to inflict physical injury on him. The priest described the suffering in a letter to a brother, who was his confidant, “These devils don’t stop striking me, even making me fall down from the bed. They even tear off my shirt to beat me! But now they do not frighten me anymore. Jesus loves me, He often lifts me and places me back on the bed.” Padre Pio testified that if a person is close to God, he has nothing to fear from the devil.

Adapted from Portuguese by Elizabeth Lavigne