Archbishop Chaput to Synod Fathers: We Need to Call People to Grace, Not Confirm Them in their Errors 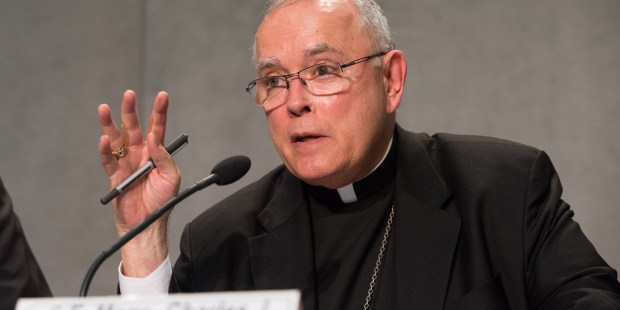 Philadelphia archbishop releases text of his intervention at the Synod

VATICAN CITY — Speculation has been swirling about what’s happening — and what might happen — in the synod discussions currently underway behind closed doors in the Vatican.

In the past, the prepared statements of the synod fathers — known as “interventions” — were made public and participants’ names identified. But with changes now introduced into the synod process, the 3-minute interventions are no longer being released by synod organizers.

A synod father is permitted to make public their own intervention, though he may not release those of other participants.

Archbishop Charles Chaput of Philadelphia has released the intervention he delivered this week, providing valuable insight into at least some of the issues and concerns being raised.

Chaput is serving as rapporteur for one of the 4 English-speaking small groups at the synod.

Here below we publish Archbishop Chaput’s intention in full.

The Instrumentum [the synod’s working document] seemed to present us with two conflicting views: pastoral despair or a decision to hope. When Jesus experienced the pastoral despair of his Apostles, he reminded them that for man a thing may seem impossible, but for God all things are possible.

In mastering nature for the purpose of human development, we human beings have wounded our oceans and the air we breathe. We’ve poisoned the human body with contraceptives. And we’ve scrambled the understanding of our own sexuality. In the name of individual fulfillment, we’ve busied ourselves with creating a new Babel of tyranny that feeds our desires but starves the soul.

Paragraphs 7-10 of the Instrumentum did a good job of describing the condition of today’s families. But overall, the text engenders a subtle hopelessness. This leads to a spirit of compromise with certain sinful patterns of life and the reduction of Christian truths about marriage and sexuality to a set of beautiful ideals — which then leads to surrendering the redemptive mission of the Church.

The work of this synod needs to show much more confidence in the Word of God, the transformative power of grace, and the ability of people to actually live what the Church believes. And it should honor the heroism of abandoned spouses who remain faithful to their vows and the teaching of the Church. …

We need to call people to perseverance in grace and to trust in the greatness God intended for them — not confirm them in their errors. Marriage embodies Christian hope – hope made flesh and sealed permanently in the love of a man and a woman.

This synod needs to preach that truth more clearly with the radical passion of the Cross and Resurrection.

George Bernanos said that the virtue of hope is “despair, overcome.” We have no reason to despair. We have every reason to hope. Pope Francis saw this himself in Philadelphia. Nearly 900,000 people crowded the streets for the papal Mass that closed the World Meeting of Families.

We need to call people to perseverance in grace and to trust in the greatness God intended for them — not confirm them in their errors. Marriage embodies Christian hope – hope made flesh and sealed permanently in the love of a man and a woman.

This synod needs to preach that truth more clearly with the radical passion of the Cross and Resurrection.