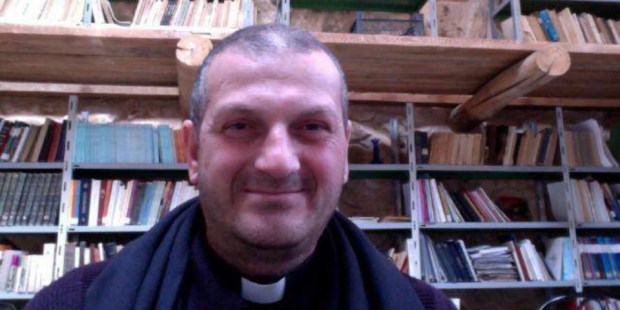 A well-known and influential Syrian priest who was kidnapped by the Islamic State group five months ago has been released, according to a Swiss group supporting his and a related monastery.

Father Jacques Mourad, a Syriac Catholic priest and former prior of the St. Elian Monastery (Mar Elian) in Quaryatayn, is in the province of Homs, according to Nadia Braendle, who operates the Friends of Mar Moussa, an initiative supporting the “parent monastery” of Mar Elyan.

Agence France-Presse also reported his release, quoting an unnamed Church source saying that Father Mourad is in the village of Zaydal, about three miles from the city of Homs. He was set free on Saturday, and on Sunday, he celebrated his first Mass since his abduction. Citing security concerns, the source did not provide details on how he gained his freedom.

The priest is said to be physically well.

Father Mourad had not been heard from since his abduction May 21. But the Islamic State released a video Sept. 25 showing a group of men in a meeting in Qaryatayn with an ISIS militant. Braendle identified one of the men in the video released as Father Mourad.

“Abouna Jacques is the third from the left, with a hand on his mouth,” she wrote in an email in which she sent a photo of the gathering.

She said he was first imprisoned in a farm shed near the village of Qaryatayn, along with 200 other residents, then in a private home.

The video, in Arabic, is titled, “Fight until they pay the jizya pledging subservience to Muslim rule.” The men in the meeting had to sign a “payment contract” to continue living in their homes, in the territory controlled by ISIS. In the contract, ISIS promised that they will not harm Christians or plunder their possessions, or force them to change their religion. Christians signing the contract promise not to conspire against the Islamic State, carry out ceremonies and liturgies in public places, erect crosses on their churches, use amplifiers, ring bells,  They also promise to pay a per capita fee, depending on their social level, which may be paid in two annual installments. Those who violate the rules will be treated by the ISIS as enemies of war, according to the terms of the contract.

Father Mourad was abducted from Quaryatayn by unknown gunmen as ISIS overran the nearby city of Palmyra. In August, ISIS also seized Quaryatayn, kidnapping some 230 civilians from the town, including 60 Christians. The group also destroyed the fifth-century monastery of St. Elian, which Father Mourad had rebuilt in recent years and used as a base to conduct an apostolate of reconciliation among Christian and Muslim residents of the area. ISIS also desecrated the grave of the monastery’s patron saint, St. Elian, who was killed by his father, a Roman officer, for refusing to renounce Christianity.

Father Mourad was previously a monk at nearby Mar Musa monastery, founded by the Roman Jesuit Paolo Dall’Oglio, who disappeared in northern Syria on July 29, 2013 while he was in Raqqa, a stronghold of the Islamic State. A monk of Mar Musa, Father Jihad Youssef, told Fides News Agency Monday that the monks are “grateful to the Lord and give praise to the merciful God” for Father Mourad’s release.

“And we thank all the friends in the world who prayed for Jacques and for our monastic community, Christians, Muslims or others, even those who do not believe or believe otherwise, for their solidarity and sympathy.”

“We ask for the prayers and solidarity of every man and woman of good will for peace in Syria and around the world,” Father Jihad added,  “and especially for all the people who have been abducted or have disappeared.”

The monastic settlement of Mar Elian, on the outskirts of Quaryatayn, had represented an oasis of peace and hospitality in the heart of a war zone. It was father Jacques, along with a Sunni lawyer, who became mediators to ensure that the urban center of 35,000 inhabitants were spared for long periods by fighting between the army and government anti-Assad militants. In the monastery hundreds of refugees were welcomed, including more than a hundred children under ten years of age. Father Jacques and his friends had provided to find the necessary for their survival even by seeking the help of Muslim donors. Then, last August, the jihadists of the Islamic State took control of the area and devastated the monastery. During their offensive in the southeast of Homs, the jihadists also took hostage about 270 Christians and Muslims in the area of Qaryatayn.