Pope’s Dormitory for Homeless is Launched 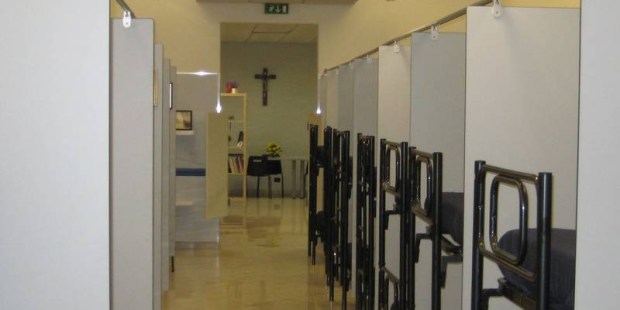 The structure has been up and running for about a day or so and the official inauguration took place away from prying eyes last week: Pope Francis’ dormitory for the homeless can host up to 34 people. The news was announced in a communiqué from the Office of Papal Charities which covered the costs of the restructuring work and furnishings.

“A new dormitory for the homeless has been open for almost a week now in Via dei Penitenzieri near the Santo Spirito Hospital in Rome. It was officially inaugurated in the liturgical memory of Our Lady of the Rosary, on Thursday 7 October, with the blessing of the locals and a holy mass,” celebrated by the Apostolic Almoner, Bishop Konrad Krajewski. The mass was attended by the dormitory’s first guests and by volunteers.

The large structure is located outside the Vatican. Until a few months ago it had been used as a travel agency and was offered to Pope Francis by the headquarters of the Society of Jesus. This was the Jesuit community’s way of responding to Francis’s October 2013 appeal for buildings to be placed in service of the needy and those in difficulty.

“The dormitory,” the communiqué says, “bears the name Gift of Mercy. Gift because it is a true gift from the religious community; Mercy because mercy is love’s second name which is expressed through concrete and generous gestures toward others.”

“The structure can host up to 34 men a night and is run by Mother Teresa’s Missionaries of Charity, as are the other Roman structures in Via Ratazzi, Termini Railway Station and San Gregorio al Celio. “There are specific regulations in place for the smooth running of the dormitory: an interview is held with the nuns who admit and register those seeking shelter. This takes place at the Dono di Maria (Gift of Mary) shelter for the homeless in the Vatican; the maximum period of stay is 30 days; there are clearly set time schedules for guest arrivals (from 6 to 7 pm), lights-out, rest and waking up (6:15 am), personal hygiene, bed-making and tidying belongings in closets provided. The structure shuts at 8 am for cleaning.”

Guests are offered dinner in the refectory located in the Dono di Maria shelter before returning to the dormitory. Breakfast is served in the same structure as the dormitory and guests can also use the homeless shower facilities under the St. Peter’s Square colonnade, which have been available for some time.

“All work was overseen and financed by the Office of Papal Charities, through offerings collected from the distribution of apostolic blessing parchments and the generous contributions of individuals. The Papal Office of Charities, together with the Mother Teresa’s Missionaries of Charity, is committed to financing the entire running of the dormitory.”

It is also worth mentioning that since 1988, the Dono di Maria shelter for the homeless has been offering overnight shelter to 50 women, 30 of whom are permanent residents. With the addition of the new dormitory, the Vatican is now in a position to offer a bed to a total of 84 people without a fixed abode.