Holy Tunic of Argenteuil, Seamless Garment, To Be Displayed in 2016 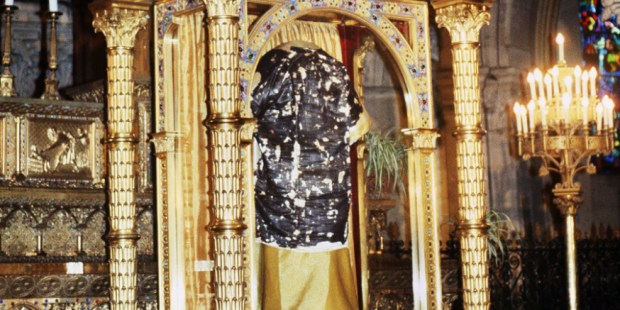 In honor of the Year of Mercy decreed by Pope Francis — which begins on December 8, 2015 — Stanislas LaLanne, Bishop of Pontoise and “Guardian of the Holy Tunic” has announced that the Holy Tunic of Argenteuil – purported to be the seamless garment worn by Christ on Calvary – will be exhibited to the public for a very brief time: from March 25 to April 10, 2016.

This tunic was originally documented as being seamless and of-a-piece, fitting the description found in the Gospel according to John (Jn 19:23-24):

“When the soldiers had crucified Jesus, they took his clothes and divided them into four shares, a share for each soldier. They also took his tunic, but the tunic was seamless, woven in one piece from the top down. So they said to one another, “Let’s not tear it, but cast lots for it to see whose it will be,” in order that the passage of scripture might be fulfilled [that says]: ‘They divided my garments among them, and for my vesture they cast lots.’ This is what the soldiers did.”

The relic is known to have arrived in France in the year 800, when the Empress Irene of Constantinople — hoping to marry Charlemagne, and thus unite their empires — presented the garment to him as a coronation gift. The marriage never happened, as Irene was soon dethroned, and Charlemagne entrusted the tunic’s safe-keeping to his daughter, Théodrade, then Abbess of the Monastery of the Humility of Our Lady of Argenteuil.

During the Norman invasion, the nuns sealed the tunic behind a wall, where it remained until the middle of the twelfth century. By then, the monastery had come under the ownership of the Benedictines of St. Denis, who, in 1131, held a solemn viewing for King Louis VII. Saint Louis also venerated the relic, twice, in 1255 and 1260. In 1544 Francis I had the village of Argenteuil fortified to protect the tunic from theft.

During the French Revolution, the integrity of the Z-twist-patterned woven tunic was lost as the parish priest of Argenteuil — hoping to protect the unique garment from confiscation by the government — cut it into several pieces, burying some, and entrusting other pieces to parishioners. The priest, jailed for two years, attempted to patch the relic back together, but some parts of the tunic were never found.

While minimal testing has been done on the cloth, it has been determined that the blood stains found within its fibers are type AB, as with the Shroud of Turin, and that the two relics share similar pollens.

In the modern era, the tunic has been displayed every fifty years, so this exception for the Year of Mercy is noteworthy. The tunic — having been stolen in 1983, and then recovered — was last given exposition in 1984, drawing at that time approximately 80,000 pilgrims. As the 2016 display will occur during the 150th anniversary of the Basilica of Saint Denis, and the 50th anniversary of the establishment of the diocese of Pontoise, Father Guy-Emmanuel, rector of the basilica, is expecting more than twice as many pilgrims to venerate the relic.

Translated from the French by Elizabeth Scalia, with additional research added.