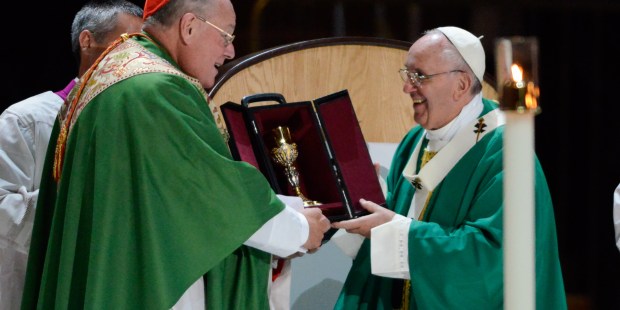 One of the cardinals who signed a controversial letter to Pope Francis explained in an interview today how his participation came about.

Cardinal Timothy Dolan of New York said on Sirius XM’s Catholic Channel that he was in a meeting last week with Australian Cardinal George Pell, who suggested writing to Pope Francis about concerns over how the synod was being run.

According to Damian Thomson in The Spectator, and other reports, 13 of the 74 cardinals participating in the synod wrote Pope Francis a private letter warning that the synod is being hijacked by liberals obsessed with the narrow issue of giving Communion to divorced and remarried people. The letter was leaked by Vaticanista Sandro Magister on Monday. The signatories also expressed concern that taking a route of “pastoral flexibility” could lead to the Church falling apart in the same way as liberal Protestant denominations; and that the synod working papers prepared by Cardinal Lorenzo Baldisseri and Archbishop Bruno Forte are a mess.

They also expressed concern about a part or parts of the synod procedure, especially the appointment of a 10-member committee to draft the final document.

Soon after the letter was published, four cardinals said they did not sign any letter and two others said the letter published by Magister is not the one they signed.

John Allen, writing at Crux, said the letter was allegedly hand-delivered by Cardinal Pell to Francis on Monday, Oct. 5, the first full working day of the synod:

Speaking on background, one senior member of the synod told Crux on Monday that while there actually was a letter, the content as reported, as well as the list of signers, was “not correct.”

The source declined to elaborate on what the letter actually did contain, or who really did sign it.

Cardinal Dolan told Catholic Channel’s Mary Shovlain in Rome Tuesday, “All I know is when I got here, there were a number of bishops, one of whom was Cardinal George Pell, who I respect very much, and we were chatting about a couple concerns that we had. And George said, ‘You know what? Why don’t we get together and—we love the Holy Father, we trust him, he’s urged us to be as honest with him as possible—why don’t we write him that we’re worried. We’re worried first of all that if the instrumentum laboris, which has a lot of good things, but we’re kind of worried if that’s the only document that we’re going to be talking about at the synod.”

“Number 2, we’re a little worried about the process, there seems to be some confusion,” Cardinal Dolan continued. “And 3, we’re a little worried about if we’re going to have a say in the people who are going to be on the final drafting committee. Cardinal Pell in his good shrewd way said, ‘Am I correct in summing up some of the concerns?’ Some of us, myself included, said ‘Boy, that sounds good to me. If you have a letter to the Pope, count me in.’ And sure enough I signed it.”

The New York cardinal said that this chain of events took place “right before the Synod even began.”

“The day after it went in, the Holy Father very sensitively, at the beginning of the next day, he didn’t refer to the letter, but he said ‘Hey everybody, I’ve heard from some of you that you got some concerns,’ then he listed the exact concerns I just mentioned to you and then he said, ‘Let me try to respond to that.’

“I said ‘Way to go, Pope Francis. You told us to be honest; we were. You answered right to the heart, I’m grateful that you paid attention, let’s get on with the work.’”

The cardinal, who recently hosted Pope Francis in New York, said he had forgotten about the letter and “didn’t think it was controversial at all.”

Vatican spokesman Father Federico Lombardi on Monday reiterated that Cardinal Pell declared that the letter was confidential and should have remained as such. Neither the text published nor the signatories correspond to what was sent to the Pope, Father Lombardi said:

I would add that, in terms of content, the difficulties included in the letter were mentioned on Monday evening in the Synod Hall, as I have previously said, although not extensively or in detail. As we know, the General Secretary and the Pope had responded clearly the following morning. Therefore, to provide this text and this list of signatories some days later constitutes a disruption that was not intended by the signatories (at least by the most authoritative).

Therefore it would be inappropriate to allow it to have any influence. That observations can be made regarding the methodology of the Synod is neither new nor surprising. However, once agreed upon, a commitment is made to put it into practice in the best way possible.

This is what is taking place. There is very extensive collaboration in the task of making the Synod progress well along its path. It may be observed that some of the “signatories” are elected Moderators of the Circuli Minori, and have been working intensively. The overall climate of the Assembly is without doubt positive. Cardinal Napier has expressly asked me to clarify the comments published in an interview with Crux, which do not correspond to his opinion. With regard to the composition of the “Commission of the 10” for the final text, it was incorrectly written that “… Napier said, adding that he would actually challenge ‘Pope Francis’ right to choose that’”. Cardinal Napier has requested that this be corrected, affirming the exact opposite: “… no-one challenges Pope Francis’ right to choose that”.

I have no further observations to make.