Catholic Street Preachers Leave the Fire and Brimstone Behind 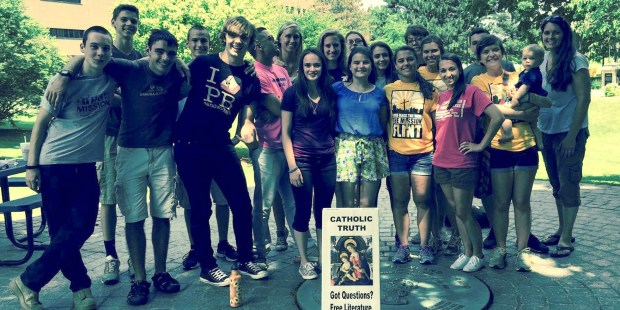 There’s a British alternative rock band called “Manic Street Preachers” that reminds me of some of the fundamentalist street preachers I used to know in my Protestant days. Like the Westboro Baptists, some of the old-fashioned street preachers seemed not only manic, but frantic. High on emotion and low on content, they bellowed out a hell fire and damnation message like latter day prophets of doom and gloom.

St. Paul Street Evangelization was founded by Steve Dawson after converting to the Catholic faith in 2002. After his conversion Steve took time discerning religious life, spending 14 months with the Franciscan Friars of the Immaculate, before discerning his call to work for the Church as a layman. Since then he has been active in various Catholic ministries and in leadership positions in the pro-life movement.

I spoke to Adam about St. Paul Street Evangelization, and was impressed to learn that these lay evangelists are anything but manic street preachers. Approved by the Church’s hierarchy, well educated in theology and apologetics, and completely up to date in communication techniques, they have a simple and positive plan to take the good news of Jesus Christ in the fullness of the Catholic faith out onto the streets. Their mission is an excellent example of an entrepreneurial lay apostolate in the true spirit of the Second Vatican Council, and it has seen rapid growth, with more than 180 teams spread all over the United States and even internationally.

Here’s how it works:  After receiving training from the team at St. Paul Street Evangelization, at least two Catholic evangelists choose a place in their city or town with a moderate to high level of pedestrian traffic.  Training is given online or through workshops and those who complete the course are given certification. The evangelists then “set up shop” with a sandwich-board sign and assorted pamphlets on aspects of Catholicism, holy cards, rosaries and miraculous medals.

They then invoke the Holy Spirit to guide their efforts for that day. They ask the Blessed Virgin’s intercession so the Lord will send them the people who need to meet them. After prayer, they simply wait for passers-by to draw near and they offer the person a free rosary. The evangelizers also provide a pamphlet on how to pray the rosary and make an effort to engage the person in conversation with questions.  An effective opening question might be, “Are you Catholic?” as the answer provides a springboard for the conversation to open out into different topics.  By asking follow-up questions, the evangelizer can discover whether a person is a practicing Catholic, fallen-away Catholic, Protestant, New Ager, atheist or agnostic.

The evangelizers are trained to remember that they are a public witness to the Catholic Church. At all times they are careful to be charitable and open to the other person and they are trained to be good listeners.

I asked Adam if the teams ever engage in arguments on the street.

“No. The evangelizers are taught not to be argumentative or combative. They should certainly defend and explain the truths of the Catholic faith, but we teach them to challenge people with questions in a spirit of sincerity and compassion. Questions help them to engage with the search for truth. Simply making statements of truth blocks that encounter.”

“What do they do if someone attacks the faith and gets aggressive?” I asked.

“Scripture says a soft answer turns away anger,” Adam replied. “They should remember that Jesus said those who are persecuted for His sake are blessed. God works in all situations, and they should not let a conversation they perceive as a failure get them down.”

Adam Janke explained how Catholic evangelization differs from Protestant street preachers. The Evangelical understanding of salvation invariably leads to pressure for a decision from the person being engaged. The Catholic method is much more of a process. The non-confrontational method of evangelization is therefore more effective and consistent with the Catholic understanding of personal faith, which is more like a journey to God than an instant conversion.

St. Paul Street Evangelizers help strengthen the faith of weak Catholics, bring back fallen away Catholics, explain Catholicism to non-Catholic Christians and plant the seeds of conversion in non-believers. They have a pro-active program of training and travel around the United States to establish teams and promote their work. Learn how you can be involved and see videos of the evangelizing teams at work by going to their website here.

Read Fr Longenecker’s blog, browse his books and be in touch at dwightlongenecker.com