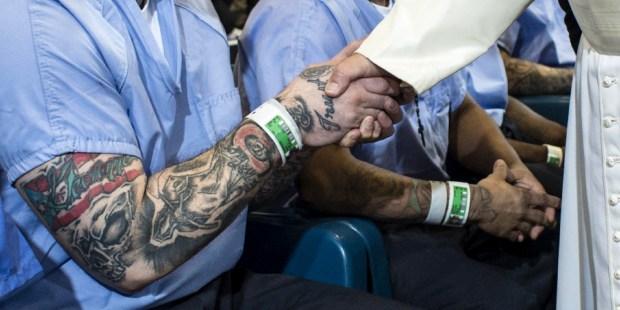 ©ServizioFotograficoOR/CPP AG
September 26 2015 : Pope Francis shakes hands with an inmate during his visit at the Curran-Fromhold Correctional Facility in Philadelphia.
EDITORIAL USE ONLY. NOT FOR SALE FOR MARKETING OR ADVERTISING CAMPAIGNS.
Share
Print
John Burger - published on 10/15/15

“I come to you as a brother, to share your pain,” said the pope, setting the tone for an emotional visit

For a Catholic prison chaplain in Philadelphia, Pope Francis’ recent meeting with inmates there had the character of the devotion known as Divine Mercy, particularly the assurance that “God is still there.”

Curran-Fromhold is home to 2,700 inmates, and it serves as the principal intake center for the city’s prison system.

Father Palkowski discussed the Sept. 27 visit and its impact and how certain of the Pope’s themes resonate with inmates and those who work in prisons.

Tell me about the day when the Pope visited,  from your perspective. I imagine there was a lot of preparation for this.

Yes, there was almost a year’s worth of preparation. Much of it I had nothing to do with, because it had to do with security. There was a whole vetting process of which inmates could come.

What sort of interaction did you have with the Pope?

I had a chance to speak to him very briefly, as he was introduced to the commissioner and the deputy commissioner. I told him in Spanish that it was a great honor, and I thanked him for coming.

What were some of your thoughts about the Pope’s remarks there?

To watch him interact with the people in that room was amazing. He started his talk by saying “I come to you as a pastor, but I come first as your brother to share your pain.” That set the tone for the whole thing. It was really great to see him interact with people. It was wonderful for the number of inmates whose first language, or whose only language, is Spanish, to be able to talk with him without the translator.

He took time for everyone. It was the closing of the World Meeting of Families, so the inmates were allowed to have their family members there. He also took time for the correctional officers who were there to guard the place, to be security. They’re often overlooked.

What were some of the comments you heard from inmates about the visit?

It’s still somewhat surreal to think that the Pope came. Think about it: you got to meet the Pope because you’re in jail? It’s almost ridiculous. You have a group of people who feel they are forgotten—to have the Pope come and visit you, it gives you a different sense of who you are. I think that really has touched a number of inmates. And even those who weren’t present, he still came to “where we are.” And even a number of correctional officers have commented. One of them told me, “No one in 20 years has done anything like this.”

The man really comes with the love and mercy of God. One of my favorite devotions is the Chaplet of Divine Mercy—the idea of Christ being the mercy of God, that God hasn’t forgotten, that God is still there. I think that’s the sense that the Pope brings, and I think it’s the sense that the prisoners and the correctional officers really picked up, that they’re still important.

Tell me about your experiences ministering there.

I’ve been there just over three years. There is a group of chaplains of many different faiths. …

It’s a very challenging place. It can be a very hard place, it can be a very dark place, not just for the inmates but for the people who work there. There’s an old Latin saying that translates as “The corruption of the best is the worst,” and I think that’s true, but it’s also true that the conversion of the worst can be the best. And I tell them, although I’m not sure they always believe me, that they could be great saints if they gave themselves to God in the same way they gave themselves to something that is evil, if they took the creativity they have—and they’re very creative in so many ways—and used it for what is good or for the up-building of society, they could be great saints.

So it’s a challenging place, but it is a place where you can find those who often are most open to God because they are most aware of their need.

Some news reports focused on Curran-Fromhold’s shortcomings and drawbacks. What have you observed?

I found that curious. Curran-Fromhold is one of the more modern facilities. The House of Correction is the oldest [section of it]. It’s a jail; it’s not a pleasant place to be. It is a hard place, a regulated and restricted place, and in some ways you have to be because you have to protect inmates from one another as well. They do a lot to keep it up. It’s clean, it’s neat, it’s painted, it’s pretty much in order. Does everything work perfectly? No, most people’s houses don’t. And it’s an enormous facility.

I know the warden, I know her team. She works hard—a number of wardens work very hard to make it a place where people are prepared to re-enter society. In all of the facilities there’s a certain challenge of overcrowding just because there’s no place else to stay.

But I think we do need to look in our country at what offenses we put people in jail for, how do we reevaluate these things, because it is such a hard place.

You mention correctional officers who work to help people reintegrate into society. That’s a concern of Pope Francis. Is that something that resonated among his listeners there? What are some feelings on things that need to be done in that area?

And I think the sadness of the situation, the heaviness of the whole thing, a lot of the correctional officers take that home with them. That’s hard on them, and it’s hard on their families. One of the inmates told me once they’re convicted and they stay there, “but you have to come back every day, even though you get to go out. You’re a little crazier.”