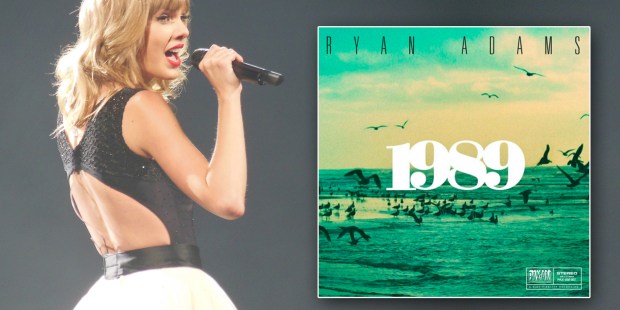 Ryan Adams’ reimagining of the pop icon’s album 1989 is haunted by the drive for love, escape, and wholeness

In January 2015 pop icon Mandy Moore and singer-songwriter Ryan Adams released an all-too-familiar joint statement: “Mandy Moore and Ryan Adams have mutually decided to end their marriage of almost six years. It is a respectful, amicable parting of ways, and both Mandy and Ryan are asking for media to respect their privacy at this time.”

But the music tells a different story. Adams admitted to Rolling Stone that he was feeling “lost,” and like all of us, was being bombarded with Taylor Swift’s big crossover album, 1989. “I was listening to that record and thinking, ‘I hear more,’” he remembered. “Not that there was anything missing. I would just think about the sentiments in the songs and the configurations.”

Adams had an idea: he would cover Swift’s whole album with a four-track recorder in his own style. “It wasn’t like I wanted to change them because they needed changing,” he said. “But I knew that if I sang them from my perspective and in my voice, they would transform. I thought, ‘Let me record 1989 like it was Bruce Springsteen’s Nebraska.’”

It was a risky move. Unless you’ve been living under a rock, you know that Taylor Swift represents a carefully crafted and hugely marketable music phenomenon, but also grist for countless parodies and send-ups. For millions of “Swifties” around the world, her go-away and please-stay anthems are the be-all and end-all of song, but for the rest of us, it’s radio pollution you have to learn to love to hate.

Maybe it was the heaviness of a crumbling marriage, or Adams’ raw talent—but it worked. On The Daily Show, Trevor Noah said people thought the album was recorded ironically as a kind of joke, but it clearly wasn’t. “Yes” is all Adams can say, laughing. His spin on 1989 is something special—not just musically, but culturally—and he can’t seem to believe it either.

On the sonic side, he never strayed from his vision of a long-lost Springsteen album, with every other track sounding like a spot-on Jimmy Fallon impression of the Boss. The Smiths, who he mentioned in a tweet about the forthcoming work, is another clear influence on “Clean” and other tracks. The result is an experience that’s more melancholy than flirty, more “Sunday morning coming down” than Friday night on the town. Reverb-heavy, atmospheric, and messy, the sound is (to borrow from James KA Smith) a “minor chord moment” in a “major chord culture,” and in some ways the polar opposite of the heavily produced original.

“What struck me immediately is that they’re not just cover songs, they’re reimaginings of my songs,” Swift said in a joint interview. “He was in a different place emotionally than where I was when I wrote them. There’s this beautiful aching sadness in this album that doesn’t exist on the original.”

But while the sound and tone have changed, the lyrics are mostly the same and seem more at home in this new landscape. Burning flames, droughts, sin, helplessness—as Smith points out, there’s a latent “beautiful aching sadness” in the lyrics after all. It just took the right person to draw it out.

“When you listen to Adams’ cover of Swift’s album, you finally realize how incredibly sad it is—that buried down beneath the perky melodies and auto-tuned precision of a pristine sound is a lyrical world of heartbreak, disappointment, and despair. Not until you hear Adams’ mournful rendition, in the gravelly timbre of his voice, does the truth of 1989 disclose itself. It’s like, up to now, the melodic tenor and sonic grammar of T-Swift’s album was lying about what it said. The sound isn’t true … Adams’ cover tells the truth about the music.”

And the truth is—as the Boss memorably put it—“everybody’s got a hungry heart.” The drive for love and escape and wholeness that haunts each track is unveiled as something existential and insatiable, something that’s more and more aggravated by every new attempt to fill it with this person or that emotion. In Adams’ 1989, the starry-eyed “Welcome to New York” becomes the lament of a jaded native who’s been in town too long, wandering the waterside in a fog; the James Dean-dreaming “Style” is launched on an angry riff, laced with a kind of urgency and self-deception; and “Blank Space” fades into the vulnerable, broken, pessimistic invitation that it is.

“Love’s a game,” the song goes. “Wanna play?” Maybe it took a singer with more of life behind than ahead to articulate it, but that game is high stakes; as summers turn to fall and passions of the moment give way to perturbations of the spirit, they only get higher. “When you’re young, you run,” Adams cries on “This Love”—but sung by a weary and heavy-laden soul that’s tired of running. It’s enough to give any T-Swift hater chills.