Pope Francis Appears to Be Discerning “Decentralization” of Authority 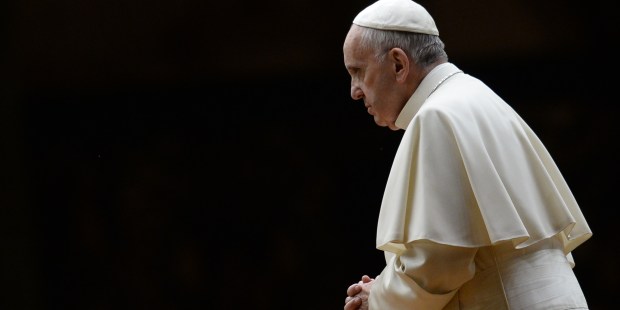 Synod acts “with Peter and under Peter,” says Pope, while suggesting Peter’s role may evolve

Marking the fiftieth anniversary of the Synod of Bishops, Pope Francis spoke of the many and distinct challenges facing pastors as they strive to understand and serve the people of the church with a synodal spirit that expresses an evolving unity with the faithful. He urged the bishops, all the clergy, and the laity to listen mindfully to each other, saying, “A synodal church is a listening church, aware that listening is more than hearing. It is a reciprocal listening in which each one has something to learn.”

“The only authority is the authority of service,” said the Pope, adding, “the only power is the power of the cross.

“Those who exercise authority are called ‘ministers,’ because, according to the original meaning of the word, they are the least of all. It is serving the people of God that each bishop becomes, for the portion of the flock entrusted to him, vicarius Christi, vicar of the Jesus who at the Last Supper stooped to wash the feet of the apostles.”

Signalling an openness toward an idea of what might be called “spiritual subsidiarity,” the pope referenced his Petrine ministry as one that has been intended “to enhance the role of synod, which is one of the most precious legacies of the last Vatican council. The pope is not, by himself, above the Church [but] called at the same time—as successor of Peter—to lead the Church of Rome,” which has primacy within all the churches, and that the synod always acts cum Petro et sub Petro—with Peter and under Peter—which, rather than indicating a restriction of freedom, is a guarantor of unity. “Indeed, it is the path of collegiality that God expects from the Church of the third millennium.” The bishop of Rome, he said, is “the perpetual and visible source and foundation of the unity both of the bishops and the multitude of the faithful.”

Citing Pope Saint John Paul II, Francis then expressed a sense of discernment that may bring discomfort to some—words that will challenge the “listening skills” of many. In a synodal church, said Francis, “it is not appropriate for the Pope to replace the local Episcopates in the discernment of all the problems that lie ahead in their territories. In this sense, I consider the need to proceed with a healthy ‘decentralization.’ While I reiterate the need and urgency to think of ‘a conversion of the papacy,’ I willingly repeat the words of my predecessor Pope John Paul II, who said, ‘As Bishop of Rome I know […] that Christ ardently desires the full and visible communion of all those communities in which, by virtue of God’s faithfulness, his Spirit dwells.'”

“I am convinced,” continued the pontiff, “that I have a particular responsibility in this regard, above all in acknowledging the ecumenical aspirations of the majority of the Christian Communities and in heeding the request made of me to find a way of exercising the primacy which, while in no way renouncing all that is essential to its mission, is nonetheless open to a new situation.”

All that God asks of us “is already contained in the word ‘synod.’ Walking together—lay faithful, pastors, the Bishop of Rome—it is an easy concept to put into words but not so easy to put into practice.”

Journeying together requires respectful engagement and—referencing the current synod—Francis gave an example of what reciprocal listening means: “How would it be possible to talk about the family without consulting families, listening to their joys and their hopes, their sorrows and their troubles? Thanks to the responses we received to the questionnaires that were sent to the local churches, we were able to hear at least some of these, covering issues that affect them closely and on which they have a great deal to say … a synodal church is a church that listens. It is a mutual listening in which everyone has something to learn. Faithful people, the College of Bishops, the Bishop of Rome: one listening to others; and all listening to the Holy Spirit.

“Synodality as a constitutive dimension of the Church, gives us the most appropriate interpretive framework to understand the hierarchical ministry, if we understand, as St. John Chrysostom said, that the ‘church and synod are synonymous'” because the Church is none other than the “‘walking together of the flock of God on the paths of history to meet Christ the Lord. We understand well that inside no one can be ‘higher’ than the other. On the contrary, the Church needs those who ‘lower’ themselves in service to their brothers and sisters along the way.”

Today’s event opened with an introductory speech by the General Secretary of the Synod of Bishops , Cardinal Lorenzo Baldisseri, and a commemorative address by Cardinal Christoph Schönborn, Archbishop of Vienna and President of the Austrian Bishops’ Conference, who pointed out, “The aim of the [synod] discussions, the aim of these witnesses is to achieve a common understanding of God’s will. Also, when we vote (as we do at the end of every synod), it is not about power struggles, faction formation (which the media is only too glad to pounce on), it is about this process of forming a communal judgement.

“The final outcome, we hope, will not be a political compromise on a lowest common denominator, but an ‘added value’ given by the Holy Spirit so that in the end we can say: ‘We have decided, the Holy Spirit and us.’

“For the past fifty years the same question of whether there should just be one ‘consultative vote’ as well as a ‘deliberative vote’ has emerged again and again. But bishops are not representatives in the same way members of parliament are. Representation takes on a different meaning in the ecclesial structure that is founded on the principle of communion and known through faith. Faith, however, cannot be represented but only testified. The aim of the [synod] discussions,” Schönborn concluded, “the aim of these witnesses is to achieve a common understanding of God’s will.”

Excerpted from Vatican Insider. Writer John Thavis has a provisional translation of the pope’s full remarks.