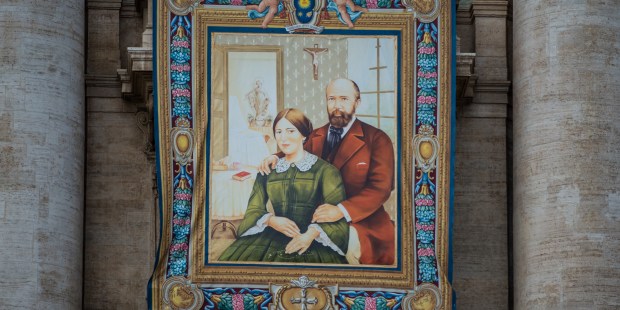 VATICAN CITY — On Sunday, Louis and Zélie Martin, the French married couple and parents of the “greatest saint of modern times,” were canonized in St. Peter’s Square. The saintly couple’s relics were carried in procession by the two little children whose lives were miraculously saved through their intercession.

In his homily at the Mass on canonization on Sunday morning, Pope Francis said: “The holy spouses Louis Martin and Marie-Azélie Guérin practiced Christian service in the family, creating day by day an environment of faith and love which nurtured the vocations of their daughters, among whom was Saint Thérèse of the Child Jesus.”

Countless people across the world, including Pope Francis, have been captivated by St. Thérèse, affectionately known as “The Little Flower.” A nineteenth-century French Carmelite, Thérèse entered the silence and solitude of the cloister at the young age of fifteen and died at just twenty-four. Yet she has been named the Church’s co-patroness of Missions (along with the Jesuit St. Francis Xavier) and was proclaimed a doctor of the Church by Pope John Paul II in 1997.

The October 18 canonization of her parents coincides with World Mission Sunday, as well as the October 3–25 Synod on the Family. The theme of the three-week gathering of world bishops is: “The vocation and mission of the family in the church and the modern world.”

Fr. Romano Gambalunga, the postulator of the cause of canonization, said: “This is the first time a couple has been canonized as a couple with a single cause, and this is a beautiful sign for Christian families.”

They Experienced Marriage as a Call from God

Louis and Zélie experienced marriage as a call from God. Initially, both sought religious life, but discerned it was not their path. One day in April, the two met outdoors on a bridge. At their first meeting, Zélie heard in her heart: “This is the one I have prepared for you.” Louis and Zelie were married three months later, on July 13, 1858, at midnight.

Why marry at midnight? “It was a custom at the time to celebrate a marriage at midnight,” Fr. Jean-Marie Simar, Rector of the Shrine to Louis and Zélie in Alencon, France, told Aleteia. “At that time, a marriage was not always accompanied by a large celebration and was often more intimate. The couple presented themselves before the altar, in the Lord’s presence, with two witnesses who signed the act of matrimony,” he said.

“But undoubtedly they also celebrated the marriage at midnight because they wanted to receive Holy Communion,” Fr. Samir added. “Until the pontificate of Pope Pius XII, the Eucharistic fast was from midnight. Their desire to receive Holy Communion as they received the sacrament of marriage was significant because it points to their desire that the Lord be at the center of their marriage.”

“Louis and Zélie lived a very simple life and chose to live by placing God at the center. They went to the workman’s Mass every morning at 5:00 a.m.,” the postulator of their cause explained. “They lived to become saints; they lived for heaven.”

In 1877 Zélie died from breast cancer at the age of forty-six, leaving Louis to care for their five young daughters: Marie, Pauline, Leonie, Celine, and Thérèse, who was just four years old at the time.

Louis died in 1894 at the age of seventy-one after suffering two strokes and five years of prolonged and serious illness.

Louis and Zelie Martin were beatified by Benedict XVI on October 19, 2008.

In 1994, when Pope John Paul II was asked why he hadn’t yet canonized Louis and Zélie, he responded: “They [didn’t] perform miracles.”

But that was soon to change. And the two miracles required for the canonization of Loius and Zelie Martin would providentially involve the inexplicable cures of babies born with what doctors determined to be life-ending ailments.

The first miracle involved Pietro Shiliro, a child born in the Italian city Monza in 2002 with a congenital lung deformation. The doctors said he would not survive.

The priest who was called to baptize Pietro encouraged his parents to pray through the Martins’ intercession. After one month in the ICU the newborn was released and is now a healthy teenager.

The second miracle involved little Carmen, born at twenty-eight weeks on October 15, 2008, in Valencia, Spain, following a difficult pregnancy. Two days after her birth Carmen suffered a near-fatal cerebral hemorrhage. Her parents went to a nearby monastery of Carmelite nuns seeking guidance and the intercession of St. Thérèse of Avila, on whose feast their daughter was born.

The prioress said not to pray to Thérèse of Avila but rather to pray to Louis and Zélie, who had just been proclaimed blessed but did yet have a miracle to be canonized.

Carmen’s parents agreed, and after three months in hospital, on January 2, 2009, their daughter was restored to good health and released—on the 135th anniversary of the birth of the Martin’s youngest daughter, St. Thérèse.

It was clear at Sunday’s canonization that Sts. Louis and Zélie Martin exercise a powerful influence in many lives.

“The Martins are very important for our whole family,” Tibot and Marie, a married couple and parents of six children from southern France told Aleteia after the Mass on Sunday. “Louis and Zelie are an example for my wife and me,” Tibot said, “and we want to follow closely their example. They show us the way to sanctity and teach us to show the way of holiness to our children.”

Nicola and his wife, Margo, who traveled to Rome with their four young daughters from Avignon, France, concurred: “We have come for the canonization of Zélie and Louis Martin because they are an example for a married couple and for the entire family.”

And Isabella, a young lady who journeyed to Rome with her father for the canonization as she prepares to enter Carmel in the United States, explained the significance of the parents of “the greatest saint in modern times” being enrolled in the canon of saints.

Isabella said: “The now saints Zélie and Louis Martin are the parents of a Carmelite saint. They are in a sense spiritual parents because they fostered a vocation in St. Thérèse. I feel they have also been influential in my spiritual life. It’s just a great joy to celebrate the canonization of Carmelite’s parents.”