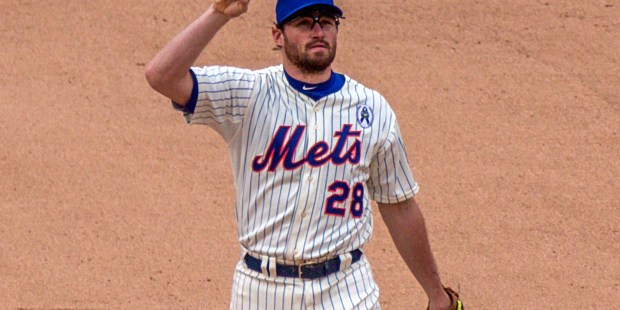 It’s amazing what will happen when your long-suffering baseball team starts winning.

Suddenly every day is summer, and you go from apathy to enthusiasm, from despair to hope.

Having grown up on Long Island, my life spent watching the New York Mets has been nothing short of a purgatory, but without the assurance that there would ever be a baseball heaven.

The real purgatory could never be as degrading as season after Met season, filed in the loss columns.

But then, this year! This year the Mets gave us hope and something more. This year it all came together for me last Saturday, as both baseball fan and preacher, as I mulled over my homily while watching the Mets win their way into the post-season.

As I saw Daniel Murphy hit yet another homer, I couldn’t help but read up on him. I had remembered that Murphy was Christian, outspoken at times, and that he had skipped out on opening day because his wife was giving birth, saying he was a father before he was a ball player.

I had thought that a heroic decision, appreciating it all the more when Sports Radio talking heads blasted him for it.

But as the season went on, all of that all faded into the background—until he became the Hottest Player in Baseball.

I hadn’t realized just how seriously he took his faith—that it wasn’t just a show, that there was some weight to his beliefs—until I picked up the paper and came across Mr. October himself in the New York Times.

There, I read that Murphy had begun to pray before, during and after games to calm himself and to center his focus. As best as he could he tried not to let his obsession with hitting and his desire to do well on the field push aside his faith. “I’m playing for Christ’s glory,” Murphy said recently. “That’s the one I forget a lot. I like to substitute Christ’s glory for Daniel’s glory.”

These words match a man who takes every chance to talk about others rather than himself. In every postgame interview I’ve noticed that Murphy pivots from himself to his teammates, always praising them, always pointing away from himself. That’s class.

In one interview he was asked how he kept calm during an intense moment, and his response was quick, unrehearsed and to the point: “That was the Holy Spirit, that was Jesus. That was the only thing that kept me calm.”

And as a priest, I very much appreciated his prayer request: “Pray that I’ll seek holiness, not base hits.”

Reading those words as I watched Murphy play, I felt a kind of kinship with him. I pray every day that I can get out of my own way and grow in holiness. We’re all called to do that. Here, a ball player was reminding me to keep doing making that prayer, because being a great ball player—or being a priest—will only get you so far. But being holy can take you all the way. To heaven. To sainthood maybe.

When preparing a homily, sometimes a new direction just pulls you and you go with it. As Murphy would say, “That’s the Holy Spirit.” I had watched the Mets win while thinking about James and John (doing their version of Abbott and Costello’s famous “Who’s on First” skit), but during the next day’s homily all I could think about was Daniel Murphy.

Apostles James and John wanted to sit alongside Jesus so they could be important too, so they would receive glory. We all do that from time to time. We all have that instinct, to be famous and important and honored in the world.

But our lives aren’t given to us for the pursuit of glory, which the world encourages us to seek. Jesus is very clear that it’s not to be that way for us. You and I are called to be different from the rest of the world. Even to contradict it.

And here a baseball player was affirming it, showing us how we are supposed to live our lives.

Baseball will come and go.

Glory, if sought after for ourselves, will ultimately leave us empty.

But if we live our lives for the glory of Christ, if we offer him everything we have, everything we are doing, at every moment, then and only then will we start truly living.

Daniel Murphy seems to understand that. Hits won’t get him to heaven. But holiness will and love for Jesus will.

Everything else is passing. Murphy, friends, is a man who gets it.