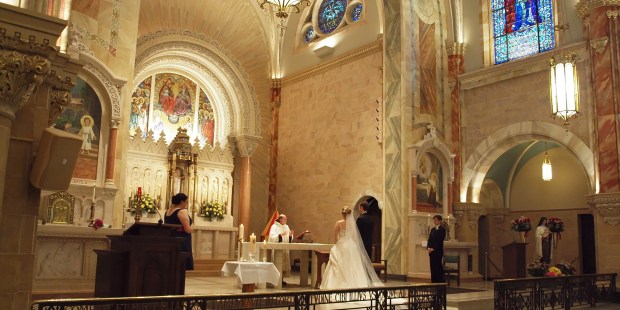 Is the “one and done approach” failing Catholic families?

Most parish churches have a regular item in their weekly bulletin that says something of the effect of “please contact the church office to register for Pre-Cana at least six months prior to scheduling a wedding.”

Is this any way to prepare for marriage—as if it were a big party rather than a lifelong commitment? A number of bishops at the Synod on the Family think not. The National Catholic Register reported:

“The idea of a ‘marriage catechumenate’—a period of formation for marriage that would cover a period of time both before and after the wedding day—has been part of the discussion at the ongoing Synod of the Family taking place in Rome.

“At least ten times, the topic of a ‘catechumenate for marriage’ came up,” Vatican spokesman Father Thomas Rosica revealed at an Oct. 6 media briefing, describing it as “preparation for marriage, a longer process for marriage, as well as a preparation that takes place in the years right after the [wedding]; it continues.”

The Register reported that while Catholics have a lower rate of divorce than non-Catholics in the United States, one out of three (28 percent) of Catholic marriages end in divorce.

According to the Reporter, some dioceses are already rethinking the way they prepare couples for marriage:

“The goal of marriage preparation is spiritual encounter with Jesus Christ,” said Mike Phelan, director of parish leadership support in the Office of Marriage and Respect Life for the Diocese of Phoenix, who told the Register that the diocese revamped marriage preparation to “imitate the catechumenate.”

In Phoenix, couples go through a nine-month formation process intended to help bring about conversion. The groundwork consists in completing the premarital inventory, and typical education about basic marriage and communication skills.

“The goal of that is to do pre-evangelization, so we can begin evangelization,” Phelan said. The next steps are a day-long program following the DVD-based God’s Plan for a Joy-Filled Marriage (Ascension Press) that immerses the couple in the Scriptures, the kerygma (proclamation of the Gospel), canon law, and theology of the body. The couple is later taught natural family planning and goes to confession before celebrating the sacrament of matrimony.

The Archdiocese of Chicago has led the way in shifting from a “marriage-preparation model to a “marriage ministry” model, according to the Register:

Frank Hannigan, director of the archdiocese’s Office of Marriage and Family Ministries, said a comprehensive formation process for couples before and after the wedding was “absolutely the way to go.”

“For too long, parishes in the Catholic Church have done a ‘one and done’ [approach]. … Once the couple is married, there is nothing for them afterward,” he said. “It’s not helpful, and it doesn’t seem to work.”

Instead, the archdiocese’s marriage formation strategy now has four components: age-appropriate education in relationships and marriage ranging from grade school to college-years; personal preparation of the engaged; preparation for the marriage celebration; and ongoing education for the newly married.

This approach is based on the assumption that not only is Pre-Cana pro-forma, but it is perhaps too little, too late. Marriage prep may be just one area of catechesis in need of reform.