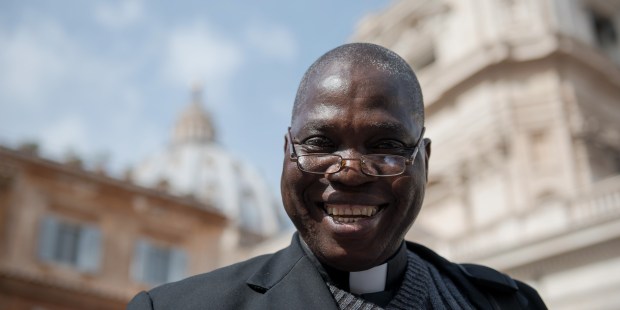 “If we want the Gospel message to endure anywhere, it must be part of the people’s thinking”

VATICAN CITY — Why was Christianity swept away in the Maghreb with the arrival of Islam centuries ago, and what lesson does this chapter in history teach us today?

Aleteia posed this question to Archbishop Matthew Ndagoso of the Kaduna diocese, Nigeria—who is on the front lines in the battle against Boko Haram. Archbishop Ndagoso is currently in Rome, serving at the Synod on the Family.

Your Excellency, can you tell us how the arrival of Islam in North Africa led to the near disappearance of Christianity in the Maghreb?

During the first five centuries, the Church in North Africa flourished. In fact, many of the doctrines of the Church were shaped in North Africa by great ecclesiastical figures such as St. Augustine and St. Cyprian. Unfortunately, with the coming of Islam, the Church almost disappeared. [This] can be explained in part through the spread of false doctrine. At that time, it was the Arian heresy. Christian doctrine is defined for us. The temptation, when faced with difficulties and challenges, is to say things in a way people are more comfortable with and thereby weaken doctrine.

And that is why—if you remember the first synod of bishops for Africa, popularly known as ‘the African Synod,’ one of the major topics discussed was inculturation. If we want the Gospel message to endure anywhere, it must be part of the people’s thinking. It must be part of their lives. It must become a way of life for them. Once the Gospel message is incarnated into cultures, it enters in and purifies the culture. People are able to think it; they are able to live it. Wherever you go, there is no separation between them and their religion.

I think this is what was lacking in areas where Islam came in and swept away Christianity from North Africa, as though it didn’t exist. Now it only exists in ruins. [We must] learn a huge lesson from this. When I was a student here in Rome, I used to say to my friends: “If what happened in North Africa after 600 years of Christianity should happen today in my country, would the Christian faith survive?” For me that is a very, very important question.

It is also a lesson for the synod fathers: once there is a struggle between leaders, once strange philosophical arguments about the faith creep in, it begins to weaken the faith.

Can you give an example?

Yes, I can give a very clear example. We are here for the Synod on the Family. It’s very clear that from the beginning, God created man and woman. He said: “It’s not good for man to be alone,” so he created the woman so that they would complement each other. It’s very clear in the Bible. Yet today there are claims coming even from Church leaders saying we need to interpret this in the light of this new situation…. Once discordant voices begin to emerge from the people who are supposed to lead, it weakens the followers. And so anyone can come, anyone can come with his own version of Christianity, and the flock is confused. We are seeing this happen even in our own day.

And young people especially want something they can hold on to. Therefore, I don’t think weakening or watering down our beliefs just to suit the modern world will help us. It will destroy us. That was the case with North Africa. Once you weaken it, it’s swept away. Everyone wants what’s original. When you go for a coffee, you want to taste a good, strong coffee. People are looking for the original, real thing, and we have this in the Catholic Church.

Is there anything else you would like to talk about?

Yes. I would like to talk about the Middle East.

Western culture, whether they like it or not, is built on Christian values … Muslims from the Middle East are flocking to the West, to Christian countries. It is good for us to offer hospitality, but I think it’s an opportunity for us to offer them Gospel values, and I hope our brothers and sisters in the West will see this as an opportunity. We don’t use people’s situation to exploit. But if we are offering them charity, if we are offering them food, we must also be able to offer them the food of life, the Gospel message.

This is what I want to say to my brothers and sisters in the West: These people are flocking from Africa and the Middle East to the West, simply because of the way Christian values over the centuries have made the West a place where you can go and be accepted regardless of where you come from. Therefore, I think that along with offering them welcome, we must not forget to offer them the Word of Life, Jesus Christ.

And the Synod, how in your view has it gone thus far?

What has made everything very smooth, so to speak, is the Holy Father’s intervention on Tuesday of the first week, when he made it very, very clear, in no uncertain terms, that he wanted everybody to know that the Church’s teaching on marriage and the family remains unchanged.

So really that statement calmed many minds. It has made a huge difference. He listened to the interventions on Monday, and on Tuesday he made that statement.

Are you referring to Cardinal Erdo’s intervention on Monday of the first week of the synod?

Did you interpret the pope’s intervention on Tuesday of the first week to be affirming what Cardinal Erdo said in his report?

Some European Bishops Conference’s, particularly Germany, are expected to push for pastoral innovations or structural changes which impinge on doctrine.

“We are ready to stay in our poverty with our faith.”

Editor’s Note: An erroneous error to Nigeria as part of North Africa has been removed; we regret the error.