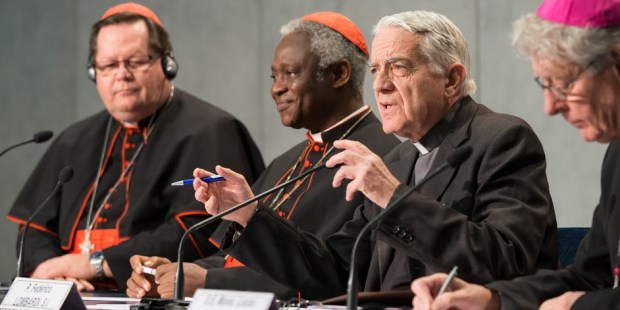 Final document to be voted on

VATICAN CITY — The synod fathers meeting in the Vatican are expected to issue an official statement on Saturday concerning families in the Middle East.

Vatican spokesman Fr. Federico Lombardi, SJ, made the announcement at Friday’s midday synod briefing. He also provided details on Friday’s morning session, saying it was dedicated to free interventions, observations, and suggested changes to the draft document delivered to the synod fathers on Thursday evening.

A total of 51 interventions were delivered at the morning session, Fr. Lombardi reported, describing them as varied and noting that “a certain number of them focused on the discussion between conscience and moral law.” On Friday afternoon the drafting commission were to amend the draft based on the morning’s free interventions and written suggestions submitted by the synod fathers.

A “New Church”?
“Welcome,” “walking with,” and “accompaniment” were among the key words used by all three prelates, with Bishop Van Looy musing on what he called a “new Church.”

“If this Synod were the Church, I would say it is the end of judging people, the end of a Church that judges every situation,” he said.

Such a Church would be a “’Church of tenderness’ toward all people, in marriage, families, accompanying people with catechesis … it would be a new Church.”

Will the Subject of Homosexuality Be Taken Up in the Final Document?

The synod fathers were also asked if the issue of homosexuality was part of the synod discussions, and if it will be taken up in the final document.

Cardinal La Croix of Quebec replied: “It was part of the discussion. It’s possible it will be in the text. But it wasn’t a synod on homosexuality, it was a synod on the family.”

Ghanian Cardinal Turkson further explained that the members of his small group bishops and cardinals discussed the issue, based on their own experience of having same-sex attracted family members.

Cardinal Turkson then quipped: “If you think homosexuality is taboo in Africa, you need to visit Russia first, to see if Africa’s got a problem with taboo or if it’s Russia or Islamic countries.”

After the press briefing the cardinal explained that gay-rights advocacy groups have characterized their movement as a human rights issue, with the UN and Western nations threatening to deny funding to developing nations if they do not accept a pro-gay policies. The cardinal stated that “while we encourage our own [countries] not to criminalize this phenomenon, we want to encourage others not to victimize nations who have difficulties with this.”

The Synod Secretariat has determined that the final document on Saturday will be given to the synod fathers only in Italian. All non-Italian-speaking synod fathers will rely on simultaneous translation of the text as they vote paragraph by paragraph on the document.

At Friday’s briefing the synod fathers were asked if the translators will be given a text, or specific terms in advance, to ensure the synod fathers know exactly what they’re voting on, especially on more controversial paragraphs.

Cardinal Turkson replied: “I think this is precisely where we count on the skills of the translators. Anyone who does translation on this level is somebody who knows, who is also very sensitive of the different nuances of some expressions. So in this sense we rely on their skills.”

Fr. Lombardi added: “The people who will do the simultaneous translation are the same who did it various synods and in many important events that happen in the Paul VI Hall. They are people with an exceptional experience, even if they do not have an advanced degree in theology. I have even seen them with the computer search for equivalent words, so I’m sure that they’ll do whatever is humanly possible.”