Recovering Our Spiritual Sight: Reflecting on the Sunday Gospel 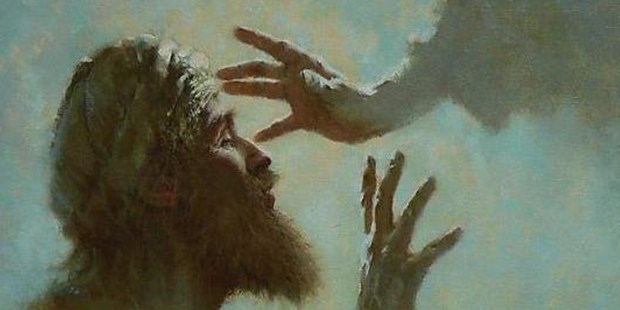 When we open ourselves to God’s grace, we can be healed of that blindness of spirit that sometimes prevents us from following Jesus with freedom and joy

Reflection for the Thirtieth Sunday in Ordinary Time (Year B)

They called the blind man, saying to him, “Take courage; get up, Jesus is calling you.” He threw aside his cloak, sprang up, and came to Jesus.

Jesus said to him in reply, “What do you want me to do for you?” The blind man replied to him, “Master, I want to see.” Jesus told him, “Go your way; your faith has saved you.” Immediately he received his sight and followed him on the way.

When I moved to Los Angeles from southern Indiana, one of the realities I had to adjust to was the large number of homeless people found in nearly every part of this sprawling city. And now, even after two years, I still sometimes find myself embarrassed and disconcerted by the extended hands or incoherent mumbling. This is a challenging reality, especially when I remember that as Christians we’re called to be people of encounter.

With all this in mind it’s easy to understand the discomfort that Jesus’ followers seemed to have felt in this Sunday’s passage from the Gospel of Mark. After all, the blind man, Bartimaeus, was causing a spectacle, shouting at Jesus. But even after the people in the crowd told him to be quiet, he kept calling out “all the more, ‘Son of David, have pity on me.’”

To really get a sense of the importance of this story, which is much more than just another account of one of Jesus’ miracles, we have to think about where it falls in the Gospel of Mark. The healing of the blind Bartimaeus is, in fact, linked to the healing of another blind man, recounted only a few chapters earlier (8:22–26). These two stories form “bookends” for one of the most important sections of Mark’s Gospel in which Jesus tries to help his followers understand who he is and what his mission really is. But as we’ve discovered over the past several Sundays, the apostles and the other disciples don’t seem to be able to comprehend Jesus’ message or to understand the true cost and meaning of discipleship. After all, these are the same men who openly opposed him when Jesus tried to teach them about his coming suffering and death.

But then, this Sunday we are given the story of this blind beggar who seems to be able to see what the apostles cannot. In fact the physical healing of Bartimaeus is a powerful reminder that when we open ourselves to God’s grace, we can be healed of that blindness of spirit that sometimes prevents us from following Jesus with freedom and joy, which is an important part of discipleship.

Saint Mark beautifully describes Bartimaeus’ excitement when Jesus finally calls for him: “He threw aside his cloak, sprang up, and came to Jesus.” There is an energy in his response that powerfully exemplifies the enthusiasm that should be a hallmark of disciples. When the Lord calls, we must be ready to respond. Because of his faith and willingness to act, Jesus rewards the blind man by not only restoring his physical sight but by empowering him to live out his faith in the community of disciples.

The invitation for us this Sunday is to humbly reflect on the ways we might be spiritually blind by asking ourselves what habits, attitudes and ideologies hold us back from becoming the disciples that Jesus is calling us to be.

How do you respond to Jesus’ question, “What do you want me to do for you?”

Reflect on times in your life when your spiritual blindness might have prevented you from recognizing the presence of Christ in your community, in the poor, and in those whom our society chooses to ignore.

What is Jesus calling you to do for others?

Words of Wisdom: “Bartimaeus represents one who has lost the light and knows it, but has not lost hope: he knows how to seize the opportunity to encounter Jesus and he entrusts himself to him for healing.  Indeed, when he hears that the Master is passing along the road, he cries out: ‘Jesus, Son of David, have mercy on me!,’ and he repeats it even louder. And when Jesus calls him and asks what he wants from him, he replies: ‘Master, let me receive my sight!’ Bartimaeus represents one aware of his pain and crying out to the Lord, confident of being healed …  In the encounter with Christ, lived with faith, Bartimaeus regains the light he had lost, and with it the fullness of his dignity: he gets back onto his feet and resumes the journey, which from that moment has a guide, Jesus, and a path, the same that Jesus is travelling. The evangelist tells us nothing more about Bartimaeus, but in him he shows us what discipleship is: following Jesus ‘along the way,’ in the light of faith.”—Pope Benedict XVI

Silas Henderson is a catechist, retreat director and the author of numerous books and articles. The managing editor of Abbey Press Publications and Deacon Digest Magazine, you can find him at www.fromseason2season.blogspot.com and www.facebook.com/SilasSHenderson.