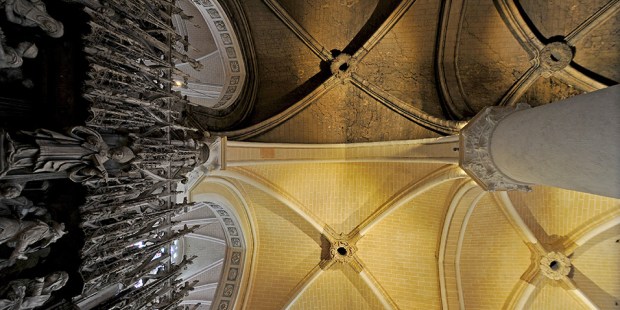 While the debate rages on over the restoration of the French Cathedral, we are reminded of its greater purpose

If you have not been following the art and architecture comentariat of late—and after all, that’s what you read me for—then you may be unaware of a tempest brewing around the restoration of the Cathedral of Notre Dame in Chartres, France. Universally considered to be one of the greatest works of architecture on the planet, the Medieval architecture of Chartres and its magnificent stained-glass windows have inspired writers, artists and composers, as well as many imitators. Beginning in 2008 the French government began to restore the building and in the process has removed much of the soot, dust and grime accumulated over the centuries.

In doing so, experts working on the project claim that they are bringing back the building to something like its original appearance, based on the discoveries they are making as they go. “Non!” shout other experts, however, decrying the work at Chartres as a scientific and architectural disaster. Their complaint is that “new” Chartres is too clean, too white, and too speculative in appearance, and that the building is being ruined through irresponsible intervention. This fight has raged in the art press for years now, and shows no sign of abating.

Why should a single building, even a church, cause so much consternation among so many people? The answer comes from the particular importance of Chartres itself, which embodies fundamental changes in human experience which today might seem so commonplace as to be easily overlooked. For at the risk of oversimplification, which is inevitable in a brief article such as this, Chartres represents a turning point both in science and in the Western understanding of man’s relationship with the Divine.

On a scientific level Chartres is a major piece of technology. Today, when most of us live or work in buildings whose walls are composed either entirely of glass or feature significant expanses of that material, it is easy for us to forget that this was once a practical impossibility. Previously, a building’s walls were used primarily for the purpose of protection from the elements, animals or other humans. The thicker and more impenetrable the wall the better.

Advances in the study and understanding of engineering, physics and chemistry, among other areas, made it possible for the builders of Chartres to alter the way that humans design and use a permanent structure. Instead of being a closed space designed to keep nature out, Chartres employs nature to achieve a greater purpose. In effect, the walls of Cathedral become a means to a double end.

At Chartres, the basic, utilitarian purpose of the structure—protection—is achieved, but at the same time this purpose is turned to a theological end: faith. The walls of the Cathedral still keep out the sun and the rain, the birds and the bugs, the Moors and the Huns in order to provide a safe place for human beings to gather and worship. However, in achieving this result through the use of copious amounts of colored glass set in comparatively thin walls, the builders of Chartres were able to achieve their purpose of persuading the visitor to fundamentally reexamine his own life. That is no small feat for a structure built 8 centuries ago, without the use of computers or modern machinery.

This purpose is highly important to keep in mind because whatever its scientific glories, Chartres was and still is, first and foremost, a house of Christian worship. While it was not the first Gothic building in the world, let alone in France, it is without question one of the finest. As a major touchstone for the Gothic style, it represents on a theological level a significant shift in man’s attitude toward the divine.

Recall that previously, houses of worship were often rather gloomy places, even if impressively sized on the outside and elaborately decorated on the inside. Structures like the Ancient Egyptian temples at Karnak, the Holy of Holies at the Temple in Jerusalem and the Hagia Sophia in Constantinople were designed to evoke the divine as someone all-powerful, mysterious and ultimately unknowable, but to a chosen few. Even on those rare occasions when light finds its way into such structures, as in the Pantheon in Rome, it was usually somewhat limited in its penetration.

With the arrival of Gothic architecture, most notably at Chartres, God is still God, but man is no longer incapable of perceiving him. This is a house of worship in which the visitor is meant to feel joy, both for being a part of God’s creation, collectively, and for being someone who God loves, individually, warts and all. Without denying divine power, let alone judgment and ultimate punishment for sin—indeed, openly warning of it in its decoration—Chartres and the many churches that subsequently copied it encourage those who pass within its walls to live in hope rather than despair.

No matter where you go inside a church like Chartres, light touches you. You are surrounded by and enveloped in it as you move in and out of the structural elements which comprise the building. While the effect of being in such a space is still overwhelming, making you realize just how small you are in the scheme of things, at the same time you are drawn to and embraced by the majestic beauty around you. Realizing that you are not forgotten by a distant God, tucked away somewhere in the dark, but rather known and cared for by him regardless of your station in life is what sets Christianity apart. The same, jewel-toned light of heaven that illuminates the priest or the king falls equally upon the layman and the peasant.

Criticism of the ongoing program of restoration at Chartres will no doubt continue for years, as it has for other significant restoration projects whose results have been controversial—most notably that of the Sistine Chapel some years ago. The debate as to whether Chartres should be dirty and dingy, white and sparkly or something in between will occupy the art and architecture comentariat for years to come. Yet regardless, the fact that people are once again looking at and talking about the importance of this monument to the Christian faith is ultimately a good thing. Merely talking about this church may not fill up its pews, but as part of a rediscovery the rich treasury of Catholic culture and its influence on the world we inhabit today, it certainly cannot hurt.

William Newton is a graduate of the Georgetown University School of Foreign Service, the University of Notre Dame Law School, and Sotheby’s Institute of Art in London. Learn more at wbdnewton.com and follow him on Twitter at wbdnewton. This article appeared on Mr. Newton’s Blog of the Courtier and is reprinted here with permission.